An international organised crime watchdog has warned that the increasing hostility of immigration policies worldwide amid the coronavirus pandemic is endangering migrants who may instead turn to smugglers for help moving across borders. 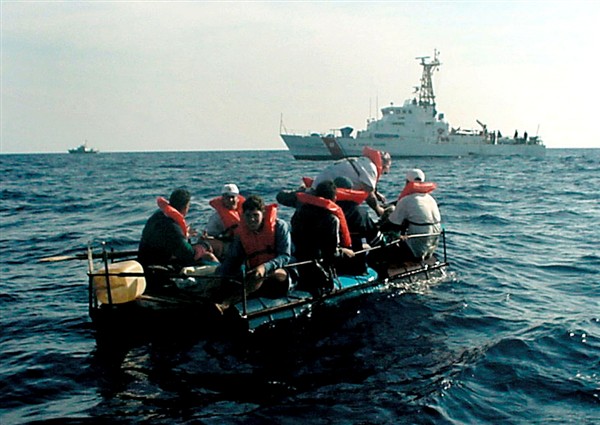 Global Initiative is warning the hostile immigraiton policies amid the pandemic will fuel human smuggling (Photo: US DoD, Creative Commons Licence)A report published on Thursday by the Global Initiative Against Transnational Organised Crime has said government policies that view migration as a contagion risk are driving vulnerable migrants into the arms of criminal organisations.

Lucia Bird, a senior analyst at Global Initiative and author of the recent report, told OCCRP in an interview on Friday that, while recognising that states are “having to adapt at lightning speed” to the spread of the virus, more attention should be paid to how hostile immigration policies fuel and exacerbate the dangers of human smuggling.

“Irregular migrants and refugees are already extremely vulnerable to human rights violations, both at the hands of organised crime, and more broadly due to their limited ability to access support and resources,” she said.

“If the environment for migration continues in this way, operating risks for smugglers go up, and time and again we’ve seen these are passed onto irregular migrants. In order to operate successfully in a more difficult environment, smuggling networks need to work more professionally, and will often be reliant on state collusion, driving public corruption,” she added.

Human smuggling differs from human trafficking, in that smugglers move migrants across borders, often for a fee, while traffickers can also operate within countries and usually seek to exploit those they are transporting.

Global Initiative’s report explains that while the two definitions remain separate, the two activities can be hard to distinguish, and that in either case the dangers are very real for those being moved by criminal organisations.

Earlier in March, OCCRP reported that Mozambican authorities had discovered the bodies of 64 migrants who had suffocated to death in a sealed shipping container in the north-eastern province of Tete.

Having been tested for coronavirus and subsequently detained, the 14 survivors reportedly said they were attempting to make the journey from Ethiopia to South Africa after Mozambique closed its borders in response to the pandemic.

Global Initiative’s report cites the incident as a crucial case study in how the disease will affect human smuggling around the world.

These deaths “may only be the first warning sign of the greater risks migrants are prepared to take to overcome border restrictions imposed during COVID-19, and the extreme danger they face in doing so,” it reads.

The closure of official entry points, increased security at borders, decreased movement within countries and disruption to air travel are all factors that Bird says will force migrants to seek out smugglers who can help them complete their journey via other means.

In response to such measures, the report further warns that these ‘other means’ will become increasingly dangerous.

“Smugglers moving further underground to evade detection have been repeatedly tracked to take riskier routes or use more dangerous transport mechanics, such as sealed lorry containers, or even smaller boats, with catastrophic consequences for migrant safety,” it reads.

Georgios Antonopoulos, a criminology professor at Teesside University in the UK, thinks that it is unlikely the increased dangers for migrants amid the global lockdown will prompt any kind of effective response at policy level.

“I’m very sceptical,” he said. “Governments tend to treat migration as a simple question of criminality, rather than a culmination of economic factors that motivate people to migrate."

Antonopoulos further points out that such policies are affecting migrants in other, more indirect ways, such as interrupting operations by anti-trafficking organisations and other NGOs that provide support to people vulnerable to exploitation by organised criminal actors.

OCCRP reported in March that the closure of the Vietnam-China border due to the virus has suspended efforts by a group that rescues women and girls trafficked into slavery and sexual exploitation.

Antonopoulos adds that he is “100% certain” the forecasted economic downturn in the aftermath of the pandemic will also negatively impact migrant welfare in other areas.

“A recession will worsen things significantly - for instance, by blurring even further the boundaries between technically legal employment and the various illegal activities behind it,” he said.

“Just look at Qatar, where African migrants are already at a significant disadvantage under sponsorship schemes that tie workers to their employers. This is completely legal in the country, but the routes these people often take and the actors they can be dependent on mean that it is nonetheless a very real form of exploitation,” he added.

Bird’s report states that while it is difficult to provide exact estimates, it is believed that the majority of the world’s 30 million migrants will have turned to human smugglers at some point in their journey.

In 2017, the United Nations’ International Organisation for Migration estimated that human smuggling around the world is a lucrative industry worth more than US$10 billion annually.

Given the forecasted increase in demand, it is highly likely that the value of such enterprises will only continue to go up.

Meanwhile, the report also adds that worldwide restrictions on movement for the foreseeable future will put stationary migrant populations, such as those residing in refugee camps, at extreme risk of “humanitarian disaster” should they be exposed to the virus.