Brazilian President Jair Bolsonaro is expected to appoint a close aide to replace former Justice Minister Sérgio Moro, sources told Reuters on Sunday, the newest development in what critics say is a concerted effort by the president to crush several investigations into his family’s criminality. 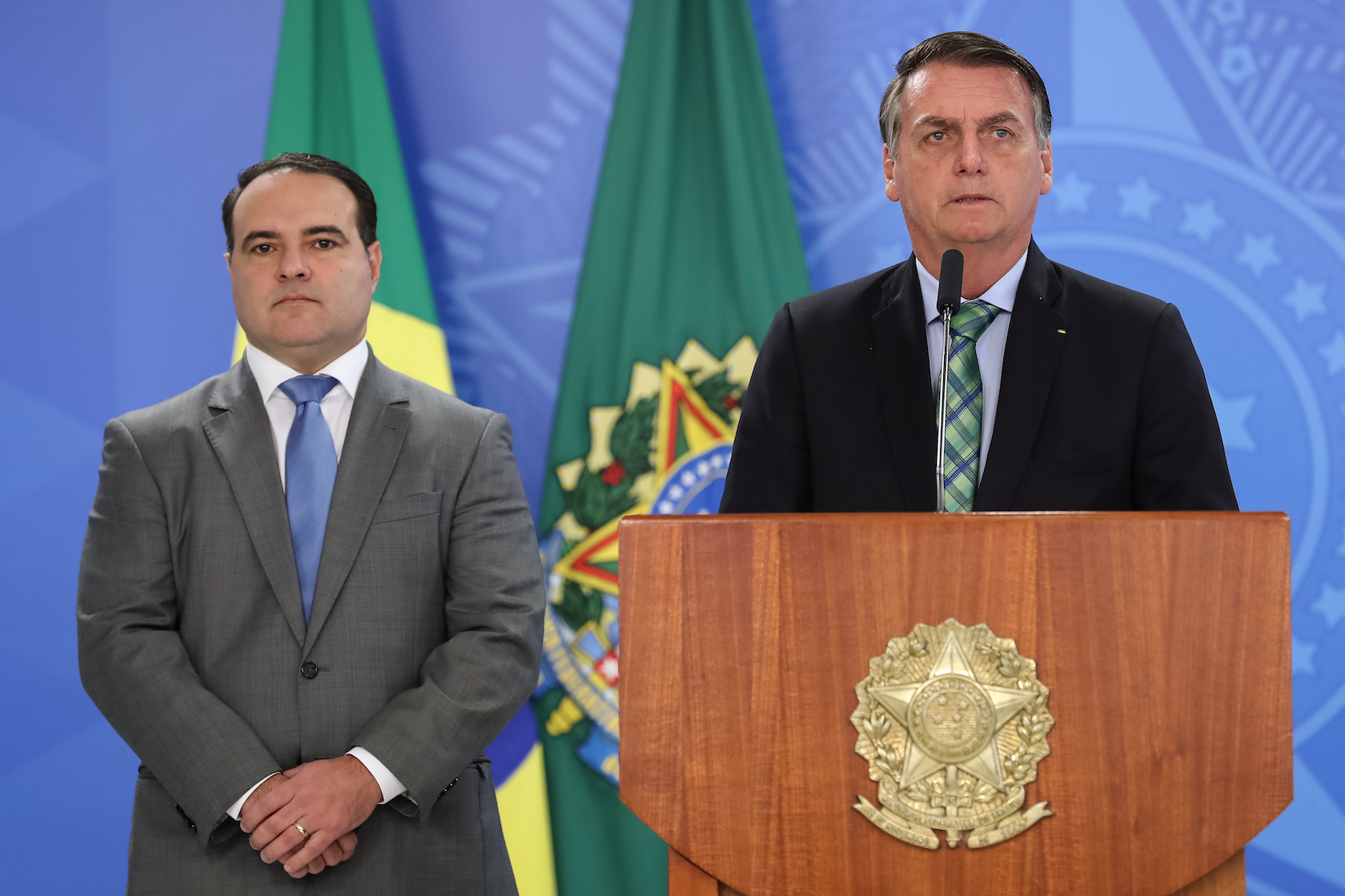 President Jair Bolsonaro, right, alongside Jorge Antonio de Oliveira Francisco, a close aide who is expected to take over as Justice Minister after Sergio Moro's resigned. (Credit: Marcos Corrêa PR/ CC BY 2.0) Moro, who had gained the reputation as being the country’s most prominent anti-graft crusader, resigned on Friday in protest of the president’s sacking of the chief of the federal police, which some have speculated could lead to additional political backlash against the Bolsonaro administration.

In a press conference, Moro said that while he did not want to cause a political crisis amidst the coronavirus pandemic, he also understood that he could not put aside his “commitment to the rule of law,” citing that it was “clear that there was political interference in the federal police”.

He elaborated that Bolsonaro had long sought his removal from office, and after the dismissal of the chief of the federal police, he didn’t “see much justification to stay.”

An editorial in O Globo, a leading news outlet that has a strong anti-Bolsonaro stance, went even further in their criticism of Bolsonaro’s decision, saying that it seemed as though he wanted “to turn the federal police into a personal police force, as if he were some kind of third world dictator”.

One of Brazil’s largest newspapers, Folha de São Paulo, reported that federal police were looking into the alleged roles of two of President Bolsonaro’s sons, Carlos and Eduardo, in a “criminal news racket” that was engaged in threats and defamation against political adversaries.

Eduardo, who is also the head of the South American chapter of Steve Bannon’s ‘Movement’, also denounced the allegations, saying on his own account that it was an attempt by the media to “confuse the population.”

The President’s third son, Flavio, was also facing a police investigation for allegations of money laundering and embezzlement that linked him to members of the mafia in Rio de Janeiro, according to the Guardian.

The Intercept also reports that this case directly connects him to a key suspect that may have been hired to assassinate Rio City Council Member Marielle Franco.

In an effort to have more oversight of these ongoing investigations, President Bolsonaro reportedly fired the former chief of the federal police, and wants to replace him with someone who would be more willing to share intelligence reports with his administration, Moro alleged.

The expected replacement, Alexandre Ramagem, formerly served as the head of Brazil’s intelligence agency, and, before then, became the head of Bolsonaro’s personal security staff after he was stabbed on the campaign trail in 2018. He is reportedly close with Bolsonaro’s sons.

“So what? I knew Ramagem before I knew my children. Should he be vetoed for that reason? Whose friend should I pick?" the president posted in response to reports suggesting that this might result in a conflict of interest.

Moro will reportedly be replaced by Jorge Oliveira, who, prior to serving as secretary of the president, was the chief of staff for Eduardo Bolsonaro, who has been serving as a Federal Deputy of São Paulo since 2015.

Some speculate that the president’s push to fill members of the judiciary and federal police with loyalists may tarnish his reputation and even lead to his potential impeachment from office.

Daniela Costanzo, a PhD student in Political Science at the University of São Paulo explained to OCCRP that in addition to some of the actual accusations Sergio Moro made against the president prior to his resignation, Bolsonaro also may lose a significant portion of his constituency as much of the support he enjoyed stemmed from Moro’s role in one of the biggest corruption cases in history - the Lava Jato probe.

Moro’s departure, she explained, would cast doubt on how serious the president is about combating corruption in Brazil, which was one of the key platforms that he ran on.

Substituting Sérgio Moro with Jorge Oliveira, a friend of the Bolsonaro family that already works in the government, “tarnishes the image defended by his supporters, that the president combats corruption and the old practices of Brazilian politics,” she said.

Bolsonaro’s approval rating, which has already been plummeting as a result of his vocal stance against coronavirus containment measures, is set for another blow, which might give parliament the mandate to remove him from office.