A shipment of medical supplies from the United Arab Emirates for Bulgaria’s fight against coronavirus consisted mostly of dried dates, OCCRP’s member center in Bulgaria, Bivol, has revealed. 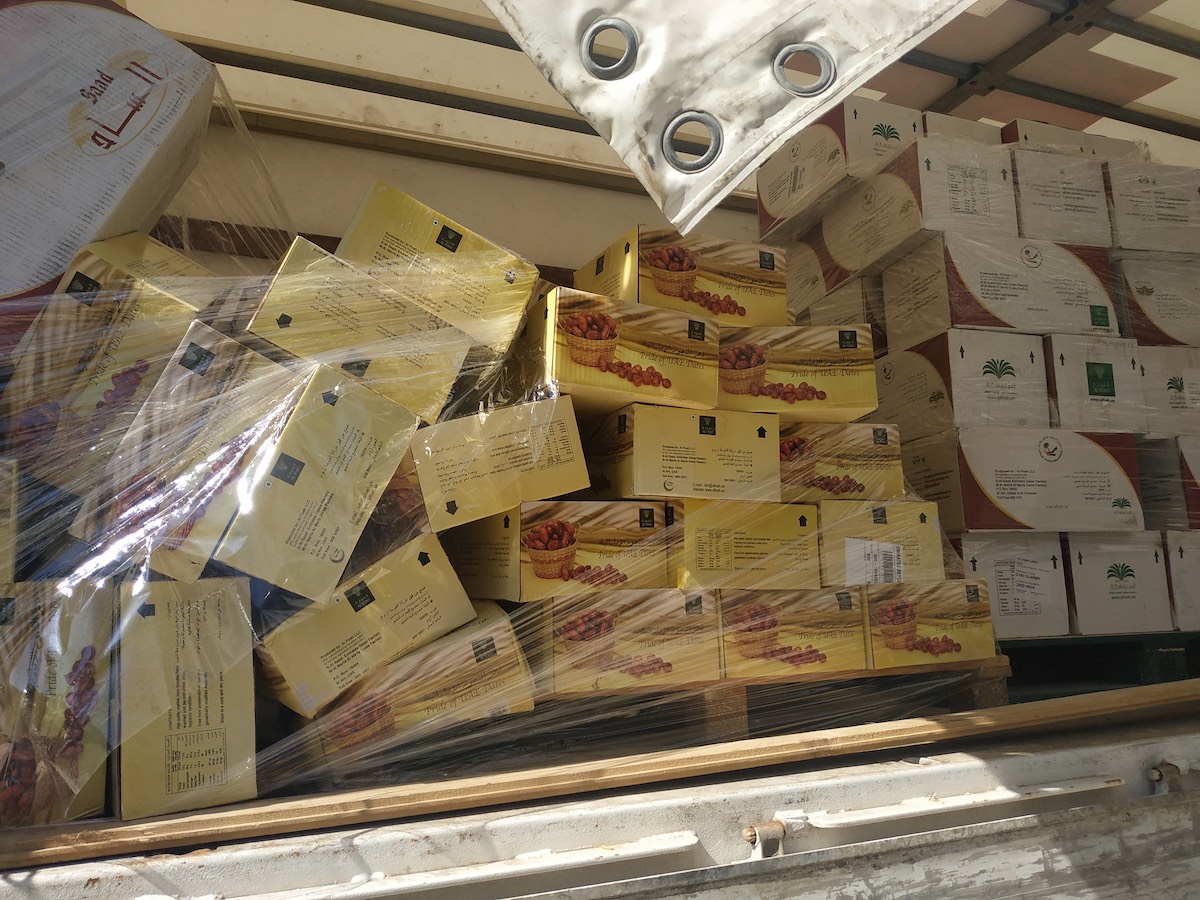 The boxes of dates received in Bulgaria. (Photo: with the authorization of Bivol)Bulgaria’s government announced on April 13 that it had shipped 32 tons of vegetables, meat and dairy products to the UAE. In return, Bulgaria received 15 tons of medical supplies, including “masks, gloves, disinfectants and clothing, as well as food,” the government said in a statement.

Bulgarian Economy Minister Emil Karanikolov accompanied the cargo – which was said to be donated by two private companies – to Abu Dhabi where he met with UAE Minister of State Ahmed Ali Al-Sayeg.

“The two discussed bilateral cooperation between the UAE and Bulgaria in the context of the challenges posed by the COVID-19 pandemic,” the government said.

The exchange garnered positive media coverage and was praised by the head of national coronavirus taskforce.

“The companies funded the transport and the state paid nothing,” said General Ventsislav

Mutafchiyski, who leads the taskforce. “This is great help because the shipment consists of protective gear such as masks, gloves and clothing.”

But when a Bivol reporter tracked the UAE cargo from the customs authority to a warehouse near the capital, Sofia, it turned out that 12 of the 15 tons were actually comprised of dates.

The economy minister told Bivol that the sweet, chewy fruits harvested from date palms that are common in the UAE and throughout the region were part of the deal.

“They are good, nutritious food," Karanikolov said, adding that they would be distributed for free among the most needy.

The value of the Bulgarian and Emirati shipments appears rather inequal. The UAE received more than double the weight it sent in freight, while a pound of dairy or meat is worth approximately twice as much as a pound of dates.

Bivol’s investigation also highlighted political connections to companies involved in the deal, which the government said was arranged on the Bulgarian side by the Ministry of Agriculture.

Bulgarian Agriculture Minister Desislava Taneva previously sat on the board of Gradus, one of the companies that reportedly donated the food shipped to the UAE. The other company, Intrust, belongs to Delyan Peevski, a businessman and member of Parliament.

Peevski is also affiliated with Lakrima, a company that supplied some dairy products for the shipment to the UAE, where it is also involved in that country’s dairy sector, Bivol reported.