The daughter of Uzbekistan’s late president will serve a further eight years in prison for corruption and criminal activities estimated to have cost the country a total of more than US$2.3 billion. 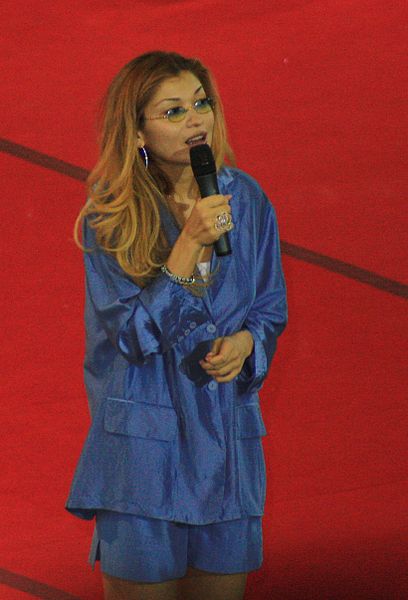 Gulnara Karimova’s 13 year sentence will count from 2015, when she was first convicted in Uzbekistan over her corrupt business practices (Photo Credit: Two Wings, CC-BY-SA 3.0)Uzbekistan’s Supreme Court announced on Wednesday that it has convicted Gulnara Karimova, flamboyant eldest daughter of Islam Karimov, on charges including extortion, racketeering, money laundering and embezzlement of public funds. The offences relate to the illegal purchase of shares in two state-owned cement companies, Kuvasaycement and Bekabadcement JSC, which were later sold abroad at a massively inflated price, as reported by OCCRP in January.

Prosecutors also said that five others were jailed as accomplices to Karimova’s crimes. The rulings came after Uzbekistani authorities outlined plans in January to seize more than $1.5 billion of Karimova’s foreign assets, currently held across more than 12 countries.

Altynai Myrzabekova, Transparency International’s Regional Coordinator for Eastern Europe and Central Asia, told OCCRP that while the recent ruling against Karimova is a welcome one, the fight to redress the consequences of her crimes is far from over.

“Gulnara Karimova operated a large corruption scheme for a decade, abusing loopholes in the international financial system to build a business empire. The fact that she is facing justice at home and abroad is a positive development,” she said.

“But there is still a long way to go to ensure that all her assets abroad are returned and used in a way that benefits the people of Uzbekistan,” she added.

The 13 year term will count from Karimova’s first conviction in 2015 and run concurrently with her previous sentences, which she was serving at her home in the Uzbek capital of Tashkent until March last year, when she was jailed for violating the terms of her house arrest.

Karimova received five years in 2017 on charges of extortion and embezzlement relating to her attempts in 2001 to secure a 20% share in Uzbekistan’s first telecoms operator, Uzdunrobita, by threatening the head of its American parent company, International Communications Group (ICG).

Uzbekistani authorities imposed that sentence in addition to the five years she received in 2015 for racketeering, which concerned her role within a large criminal organisation. Between 2001 and 2013, the group owned 16 offshore companies and 45 enterprises worldwide.

One of Karimova’s lawyers, Grégoire Mangeat, condemned the 13 year sentence as evidence of the court’s ongoing disregard for the rights of his client.

“According to the initial information received, there has been no adversarial investigation nor proceedings. The Uzbek lawyers assigned to represent her disappeared one after the other, and the judgment was reportedly issued behind closed doors,” he said.

“Uzbek authorities have now definitely demonstrated the inadmissible and illegal nature of everything that has been undertaken against our client over the last six years”, he added.

A former diplomat, fashion designer and would-be popstar, Karimova also faces charges in Switzerland and the US over her corrupt and criminal business dealings, as well as a civil recovery action in the UK.

OCCRP reported in January 2017 that the Swiss Attorney General’s Office had frozen bank accounts in the country worth more than $790 million, suspecting they contained proceeds from Karimova’s illegal activities.

Sources who previously worked closely on the Swiss investigation said that the probe began in 2012 after a number of banks, including Lombard Odier, submitted suspicious activity reports concerning accounts with links to Karimova.

The suspect financial flows allegedly related to bribery payments accepted by Karimova and her entourage in exchange for lobbying on behalf of foreign telecoms companies in Uzbekistan, including Russian company Mobile Telesystems, Stockholm-based TeliaSonera and Dutch group Veon, formerly VimpelCom.

“The office of the Attorney General in Switzerland has been able to successfully confiscate about 130 million Swiss francs. These are due to be returned to Uzbekistan, or at least that’s the plan,” sources said.

In March 2019, the US Justice Department issued an indictment against the ex-first-daughter over the incident with the head of ICG, as well as for “exploiting her official position to solicit and accept more than $865 million in bribes from three publicly traded telecom companies, and then laundering those bribes through the US financial system.”

The UK Serious Fraud Office is presently attempting to seize three properties and other assets related to the bribery scheme, according to a December 2019 notice in The Gazette, the UK’s office of public record.

In December 2013, members of a dissident Uzbek organisation broke into a villa near Lake Geneva belonging to Karimova, where they discovered works of art and historic artifacts worth more than $33 million allegedly taken from the State Museum of History in Tashkent. Some of those assets have since been recovered by Uzbekistani investigators, according to Radio Free Europe.

Karimova’s father, Islam Karimov, died in 2016 having held office as Uzbekistan’s president and leader of its predecessor state, the Uzbek Soviet Socialist Republic, since 1989. The international community repeatedly criticised his government for its restriction of press freedoms and human rights abuses.

A particularly prevalent form of torture under Karimov’s regime was the practice of immersing dissidents in vats of boiling water, in some cases in front of the victim’s families, according to a 2004 report from the US State Department.