The Pennsylvania-based pharmaceutical company Mylan N.V. agreed to pay US$30 million to settle accusations of overcharging Medicaid for its allergy treatment product, the Securities and Exchange Commission, SEC, announced on Friday. 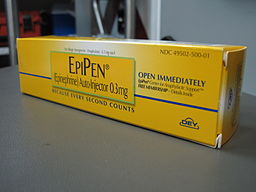 The Commission said it raised charges against the company for accounting and disclosure failures.

Previously, the Department of Justice looked into hundreds of millions of dollars of excessive charges by Mylan to Medicaid for the company’s most lucrative product, EpiPen.

The DOJ found that Mylan overbilled the government by misclassifying its EpiPen Auto-Injector as a ‘generic’ drug rather than a ‘branded’ drug, thus avoiding the payment of higher rebates to state Medicaid programs.

Mylan finds itself settling charges after having “failed to disclose or accrue for the loss” in relation to a lengthy DOJ investigation dating to November 2014. The company announced in October 2016 a $465 million settlement with the DOJ in response to that investigation.

However, the company apparently failed to complete adequate disclosure to its shareholders between the beginning of the investigation and the time they paid.

The SEC describes Mylan’s public disclosures up to that point as being “false and misleading.” The release notes that Mylan's 2014 and 2015 risk factor disclosures detailed how a governmental authority “may take a contrary position on Mylan's Medicaid submissions,” however Centers for Medicare and Medicaid Service (CMS) had by that time already informed Mylan that there were legal issues with the company’s classification of its EpiPen product.

"As alleged in our complaint, investors were kept in the dark about Mylan's EpiPen misclassification and the potential loss Mylan faced as a result of the pending investigation into the misclassification," said Antonia Chion, Associate Director in the SEC's Division of Enforcement.