American millionaire and sex offender Jeffrey Epstein was met with handcuffs when he disembarked from his private jet at New Jersey’s Teterboro airport on Saturday, while across the Hudson river FBI agents crow-barred their way through the tall oak doors of his Upper East Side townhouse, reportedly the largest private residence in New York. 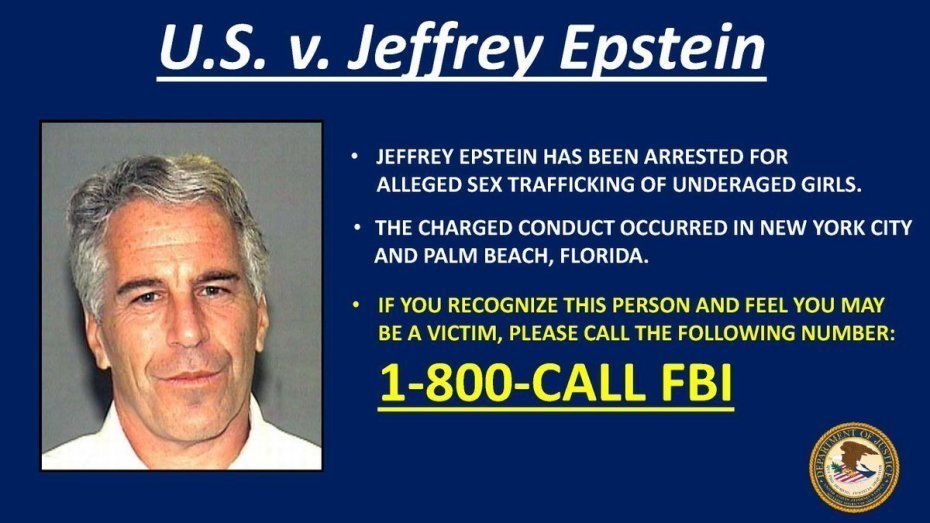 (Federal Bureau of Investigation)Inside, a “vast trove” of nude photos of what appear to be underage girls and a massage room filled with sex paraphernalia added to a “mountain” of criminal evidence against the socialite, and within 24 hours Epstein’s arrest became the biggest scandal in the world, engulfing presidents, royals, and A-list celebrities.

In indicting Epstein, New York’s Southern District court (SDNY) swiftly brought back to life a decade-old federal probe into a man whose wealth, status, and political connections allegedly allowed him to secretively rig a judicial system and evade serious criminal consequences for trafficking, molesting, and raping underage girls; and whose figure has come to represent the enduring elusiveness of justice for survivors of sexual violence.

Many speculate that the fact his case is being handled by SDNY’s public corruption unit is no mere coincidence.

According to Gene Rossi, a former federal prosecutor who spoke to OCCRP on Tuesday, it is possible these initial charges are just the beginning of what might turn into the “most explosive sex trafficking case in history.”

“The plea deal of the millenium”

More than fifteen years have passed since the first report of molestation was levied against Epstein, who began earning his fortune at Bear Stearns investment bank in the 1970s.

In March 2005 a fourteen-year-old girl and her family reported to police that she had been lured to Epstein’s lavish Florida estate by female peers after being told that she would receive payment for giving Epstein a massage. She stated that she was subsequently molested by the millionaire.

As described in the federal indictment that was unsealed on Monday, the blueprint of her story—the cash-for-massage proposition from another female peer, and then her molestation at Epstein’s mansion—is one shared by at least 80 women, most of whom were from low-income backgrounds and between the ages of 13 and 16 when the alleged events transpired in the early-to-mid 2000s.

The initial 2005 report gave way to an increasingly expansive investigation by Palm Beach police, which was later passed on to the FBI, that revealed a network of young teenage victims spread out between Florida, New York, and New Mexico.

By 2007, the U.S. Attorney’s Office had prepared a 53-page draft indictment against Epstein that would have handed him a life-long prison sentence.

“This was not a ‘he said, she said’ situation. This was 50-something ‘shes’ and one ‘he’ — and the ‘shes’ all basically told the same story,’’ Michael Reiter, former Palm Beach Police Chief, told the Miami Herald last year.

Instead, as the Herald investigation detailed, Epstein and his lawyers negotiated a secretive plea deal with then-U.S. State Attorney Alexander Acosta.

The deal winnowed down his sentence to 18 months—of which he only ended up serving 13—and provided him with a non-prosecution clause, preventing Florida authorities from continuing their investigation and pressing further charges against him.

The Herald dubbed it the “deal of a lifetime.”

Rossi, who worked for the Department of Justice and was an assistant U.S. attorney in the Eastern District of Virginia, told OCCRP that the nature of the plea bargain was “absolutely disgraceful and unheard of,” and so “outrageously” outside the norm “that it is hard to believe it was a good faith agreement.”

Secretary Acosta, who has faced mounting pressure to resign in the last few days, is not the only link between the current administration and Epstein; nor did the investigation into Epstein end in Florida.

In 2016, a lawsuit was filed with the SDNY that named Donald Trump and Jeffrey Epstein as joint defendants in a charge alleging that in 1993 a Jane Doe, who was 13 years old at the time, had been lured to a number of parties at Epstein’s Upper East Side mansion with promises of money and a modeling career.

The Jane Doe ultimately dropped her case against the two powerful men because she was “too afraid to go through with it,” according to her lawyer.

A similar scandal emerged in 2015, when Virginia Roberts Giuffre filed a lawsuit alleging that in 1999, when she was just 15 years old, she was sexually abused by Epstein at his Florida home and then subsequently “loaned” out to his friends, including Prince Andrew and Harvard professor Alan Dershowitz, as a sex slave over the next several years.

The allegations were struck from court record in 2015, though the United States Court of Appeals for the Second Circuit ordered the unsealing of the summary judgement last Wednesday.

Another highly anticipated civil lawsuit against Epstein, during which dozens of women, including Roberts Giuffre, were expected to publicly testify, was settled right before it was set to go to trial last December.

The current indictment, the United States versus Jeffrey Epstein, which is not bound by Epstein’s non-prosecution clause with the Southern District of Florida, does not include any details from or allusions to these corollary cases.

Many have speculated, however, that the main outcome of Epstein’s trial will be its indictment of some of the powerful individuals in Epstein’s extensive network who may have been conspirators or otherwise aware of the trafficking scheme.

Vicky Ward, a New York Times investigative reporter who wrote a Vanity Fair profile of Epstein in 2002, made note of the fact that in her reporting at the time, nearly all of the acquaintances of Epstein that she spoke to “mentioned the girls, as an aside.”

Though Ward uncovered two credible allegations of child rape while reporting the story, these were removed from the story by the magazine’s editor, an acquaintance of Epstein’s, before it went to print.

In 2010 Epstein’s former butler, the late Alfredo Rodriguez, who admitted to being aware that Epstein was having sex with underage girls, tried to sell a “black book” to the FBI of the names of the girls as well as associates and potential “material witnesses” to Epstein’s operation. A redacted version was made public a few years ago, and includes Woody Allen and Kevin Spacey’s names, among many others.

In 2016 Fox News reported that in the early 2000s Bill Clinton took 26 trips on Epstein’s private 727 jet, nicknamed the “Lolita Express” by the media. On Monday, Clinton’s spokesperson said the former president only took “four trips” on the plane.

“We don’t know how much, how deep this went, how far-reaching it went in government,” said Julie K. Brown, the Herald reporter that investigated the Epstein case, in an interview with MSNBC on Sunday.

“But there have been a lot of names that I could see on these message pads [listing clients] on a regular basis as part of the evidence. So there are probably quite a few important people, powerful people, who are sweating it out right now. We’ll have to wait and see whether Epstein is going to name names.”

What stood out to some about Epstein’s arrest on Saturday is that the case is being handled by SDNY’s public corruption unit, which oversees “bribery, embezzlement, and frauds committed against local, state, and federal government agencies,” none of which were explicitly mentioned in the indictment.

“It does catch one’s attention because these charges aren’t the type you’d normally see associated with public corruption, especially when Epstein isn’t a government official,” Andrew Jennings, a fellow and lecturer of Law at Stanford University, told OCCRP.

Rossi believes it is no accident that the public corruption unit is handling the case.

“It was not just a slow day in the public corruption unit. This was a well thought out, deliberate decision,” he said to OCCRP on Tuesday.

“I can’t believe, in all the years, they didn’t come up with information that he had improper relations with people in his social stratosphere, which would have included current and former elected officials.”

With regard to Epstein’s “sweetheart deal” in 2008, Rossi added that “there is plenty of reason to investigate whether there was some quid pro quo or undue influence between Acosta and Jeffrey Epstein’s teams” at the time.

In advance of Monday’s federal court appearance, during which Epstein pleaded not guilty, the SDNY filed a memo to the court making the case for why the millionaire should be detained pending trial.

The letter noted that there is an “extraordinary risk” that Epstein—who has three U.S. passports, two private planes, and several international properties—would try to flee if released on bail.

“He is a man of nearly infinite means, your honor,” Assistant U.S. Attorney Alex Rossmiller said in court on Monday.

The memo also noted Epstein’s history of obstructing justice through pressuring and intimidating witnesses and victims into silence.

Epstein’s bail hearing was postponed to July 15 to give his defense team time to prepare a written response.

Officials also noted that when they entered Epstein’s home, they found that "the massage room was still set up in the same way it was 15 years ago.”

In court on Monday, one of Epstein’s attorneys dismissed the behavior being charged as “ancient.”

There is no statute of limitations for the criminal charges in question and prosecutors flatly rejected the premise that Epstein’s behavior is ancient history.

"Your honor," Rossmiller said, "This is not an individual who has left his past behind."