Interview with Khadija: 'It's the revolving door of political prison in Azerbaijan'

On her first day of freedom, between CNN’s Christiane Amanpour and the Voice of America, Khadija Ismayilova made time to talk to the Organized Crime and Corruption Reporting Project. She reflected on the experience of her 537 days in jail, the current situation in Azerbaijan and the Khadija Project, OCCRP’s response to her incarceration.

OCCRP: Can you tell us about the conditions in jail? Did you ever encounter any kind of abuse, either against you or others?

Khadija: I told myself I’m not spending my lifetime, I’m spending a prison term. So I’m not going to get older – the time that is spent there is not my life. So that was the attitude, and attitude is essential.

There were some minor problems, but my decision was that I will not complain about the conditions, because I don’t want people to be scared of the prison. That’s what the government wants, is for the journalists, activists, politicians to be afraid of imprisonment and stop criticizing the government…. There is nothing unbearable – as you see, I am full of energy. You can survive – and even more.

OCCRP: Can you explain the specific terms of your release? I understand you can’t leave the country, but can you travel at all? And are you allowed to continue with your work?

Khadija: I’m yet to discover it. I have to go to police to find out what that specifically means. Normally, in practice, it means I cannot travel out of the country and I have to report to police every month and (show) that I did not commit any crime.

They say I cannot hold any public position – which I didn’t hold anyway. So I leave all the boring positions for them, let them occupy all the public offices; I will do my job. In the first place I will go to the European Court (of Human Rights), because I do not agree with their decision, and I will get full acquittal. We are expecting the decision.

Two of the charges have been dropped, and two are still remaining. The remaining charges are illegal entrepreneurism and tax evasion, which is false, again. I have yet to receive the court decision to see which part of the prosecutor’s findings they found false, and which part they have (upheld).

OCCRP: Did you encounter any other journalists while in jail, or any human rights activists or bloggers?

There were a couple of women in prison who were claiming to be journalists but I didn’t know them. I didn’t have a chance to read their stories.

OCCRP: Did you hear that two people were arrested at the same time as you were being released?

Khadija: Yes, I know, and I know one of them, Elnur Mukhtarov, he is a photojournalist and he himself was photoblogging. It’s the revolving door of political prison in Azerbaijan. They release two, they arrest more. They release one, they arrest two. So that’s what they do.

Amid (Seleymanov) is definitely a blogger; I haven’t read professional media stories [by] him but he’s a blogger.

OCCRP: How has the experience changed you, if at all?

It’s an experience in Azerbaijan that drug addicts are being arrested as well when they [possess more drugs than the legal limit].

I would love to remain unexperienced in that sense. But it’s not the drug addicts that are dangerous – you see a lot of pain, you see a big tragedy. So far I didn’t have any experience in communicating with them. Here I’ve heard a lot of tragic stories. But there were also drug traffickers, people who are arrested for fraud – and it’s like totally you start trying to understand why they became criminals, why they ended up committing crimes. Actually in most of the stories you hear the same thing: these people have all been deprived of opportunities, almost all of them – and getting into the criminal world was the only seemingly possible opportunity for them because the government wouldn’t give them more opportunities.

You start thinking about the reasons why a woman from a good family – a family that’s never been involved in any criminal actions – starts selling drugs.

OCCRP: What are you planning to do first, in terms of your work?

Khadija: OCCRP is publishing right now another gold story; it’s another part of our gold investigation (People of Azerbaijan Bail out Failed Aliyev Mining Empire). I’m happy to be back with Radio Liberty and OCCRP and continue doing investigations. I have some stories in the pipeline that hadn’t been finished; I will have to recover all the information and we will start working again. I’m eager to have access to the Panama Papers as well. (At the exact time Azerbaijani reporters were celebrating Khadija’s release from prison, the president of the country quietly ordered his government to buy his daughters’ failed mining venture. OCCRP published this investigation on her first day of freedom.)

OCCRP: How did you hear about the Panama Papers in jail?

Khadija: The government newspapers published Panama Papers (stories) about other countries’ officials but not about Azerbaijani officials – but I was also subscribed to Azadliq, the only critical newspaper in Azerbaijan, so I’d been reading all the investigations by OCCRP and others, and that was great news.

The best thing one can [experience] in prison is to know that the work is being done and nothing has being stopped – and whatever the government has tried to achieve by arresting me, it didn’t achieve because even more investigations have been conducted as a result.

My lawyer told me first about Khadija Project. I was like, wow – when stories came I was like – it’s worth it. It’s worth it to be in prison and see how it works – it’s great. It’s partnership, it’s solidarity, it’s professionalism – it’s great. I felt like I have a lot of siblings all over the world.

OCCRP: What are your thoughts about the other journalists who are still in jail, like Seymur Haziyev?

Khadija: Seymur is a good colleague, he’s a very brave journalist, and he’s been very famous with his analysis of the political situation. His TV show, “Azerbaijani Hour,” was very popular especially in rural areas and was aired through satellite. Unfortunately, the Supreme Court didn’t do the same with Seymur’s decision.

We have to work more in terms of making the Azerbaijan government understand that it’s expensive to arrest and jail journalists like Seymur – it’s not worth it. (We need) more international pressure – and all journalist arrests are important, especially people like Seymur.

OCCRP: I understand you have to go now, but do you have any last thoughts to share?

Khadija: I want to thank all my colleagues again; it was a wonderful experience. I was so happy my OCCRP colleagues were all working together to make things clear about the corrupt officials in Azerbaijan. That was great, to know that I’m a member of such a good team.

I also want to thank everyone who did anything to get me out of prison. I’m not complaining about being in prison – I wouldn’t change anything that (I did) before, I would do the same – but it’s great to be among friends and start working again.

More to come: Ismayilova commented extensively about other journalists and bloggers, and those comments will be included in an upcoming article about those who remain in prison.

Today is investigative reporter Khadija Ismayilova’s 40th birthday. Two days ago, on May 25, 2016, Ismayilova was set free after Azerbaijan’s Supreme Court ordered her release and suspended her sentence. The Organized Crime and Corruption Reporting Project wishes her a happy birthday celebrating her freedom. Here’s her release documented in photos by Radio Free Europe/Radio Liberty, out of prison and back home with friends and family. 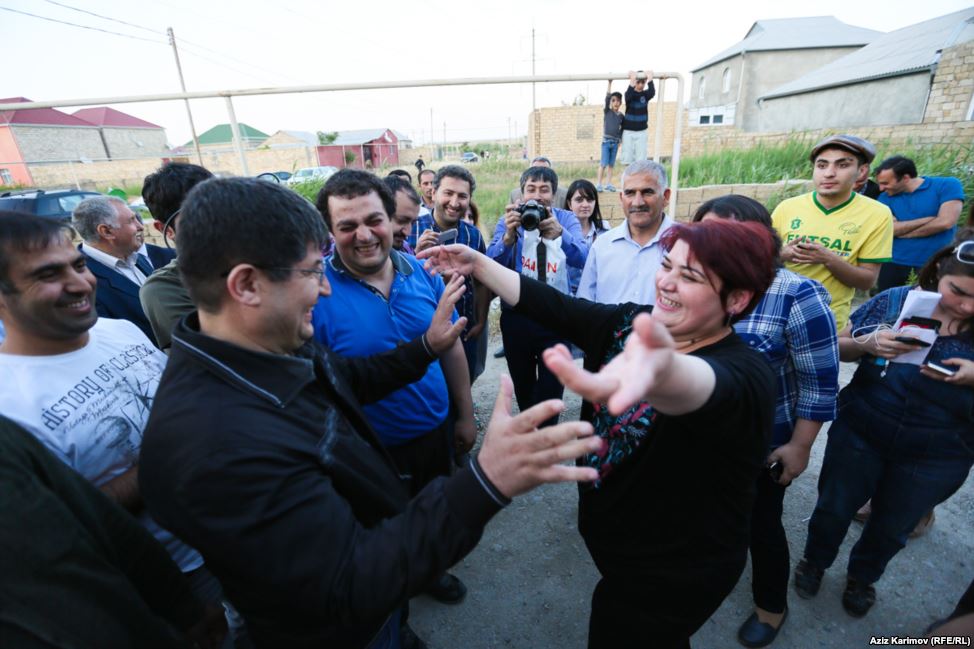 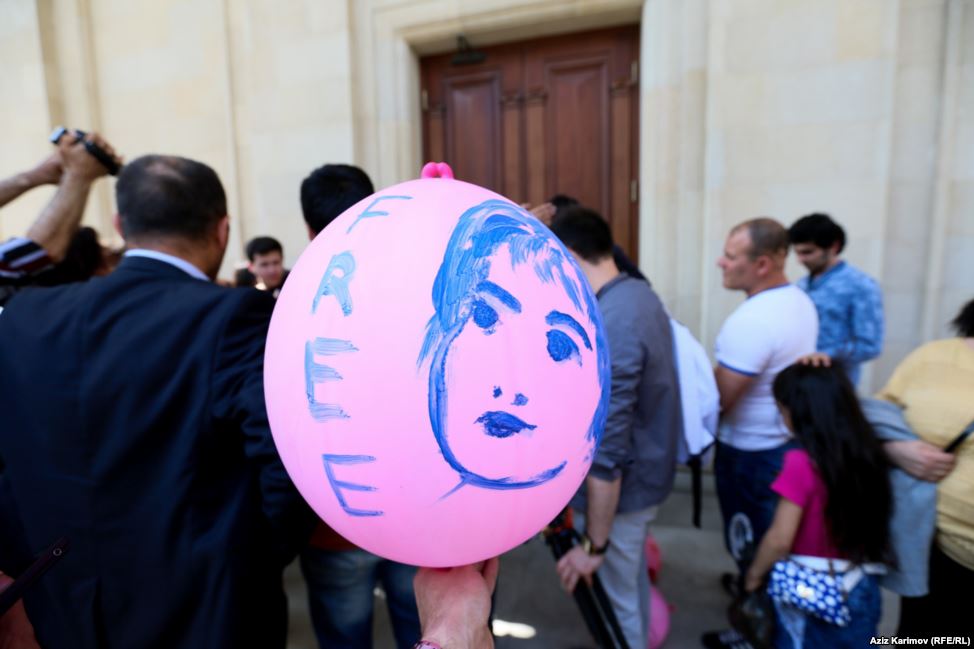 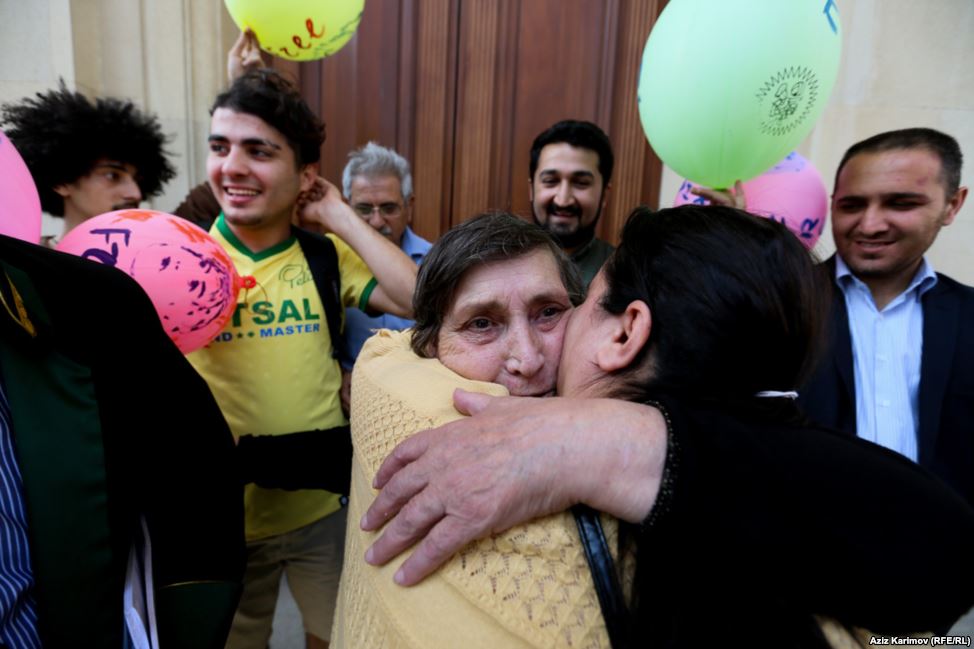 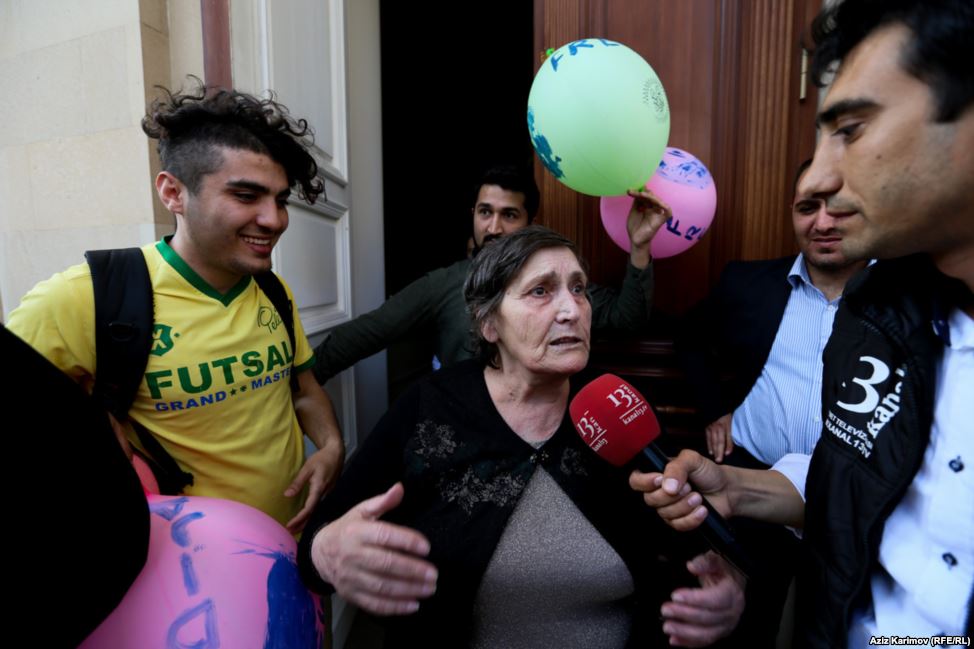 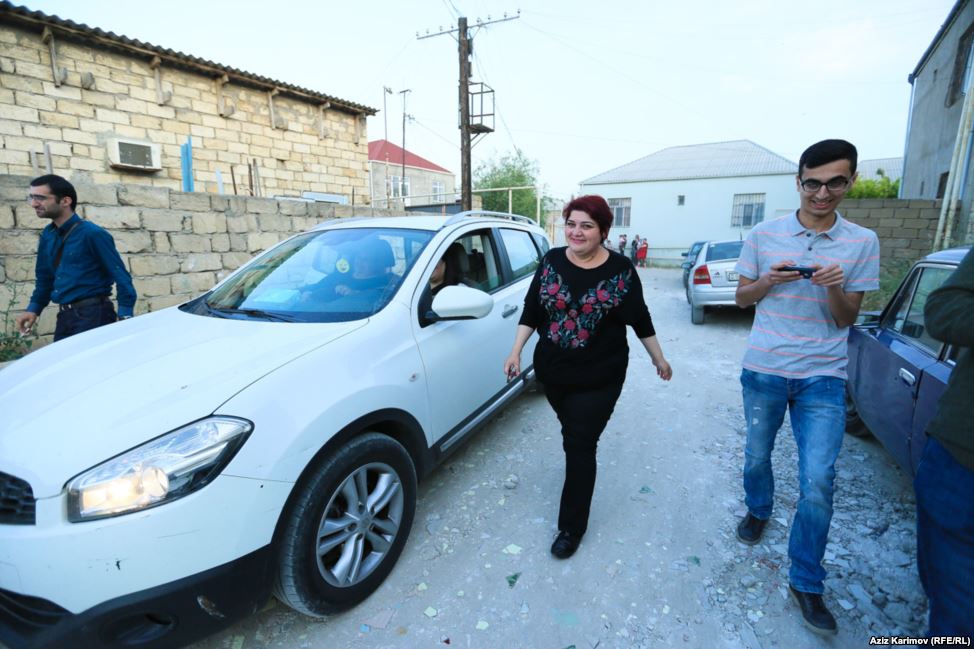 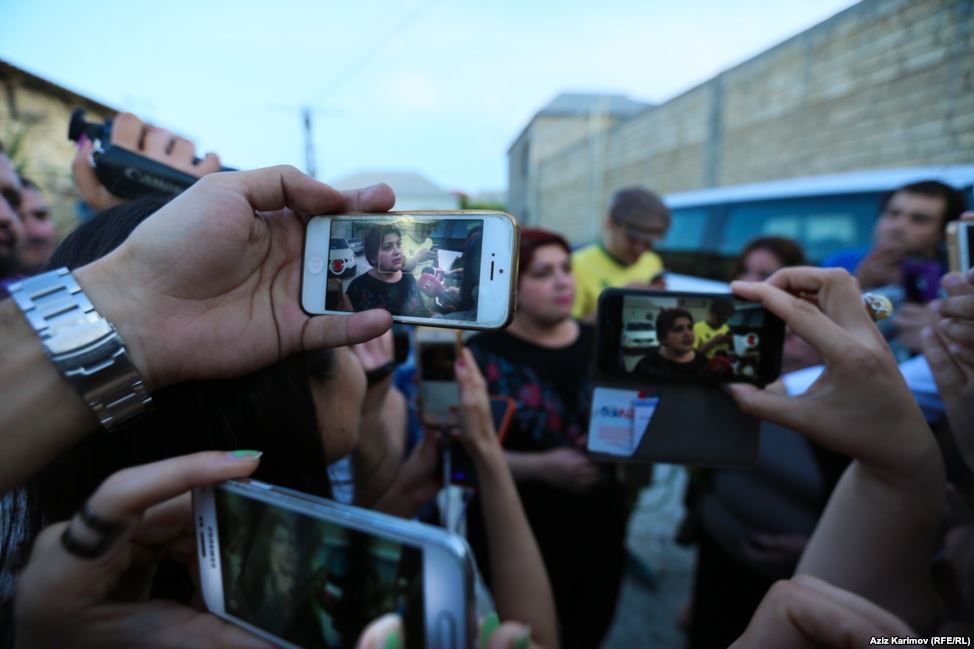 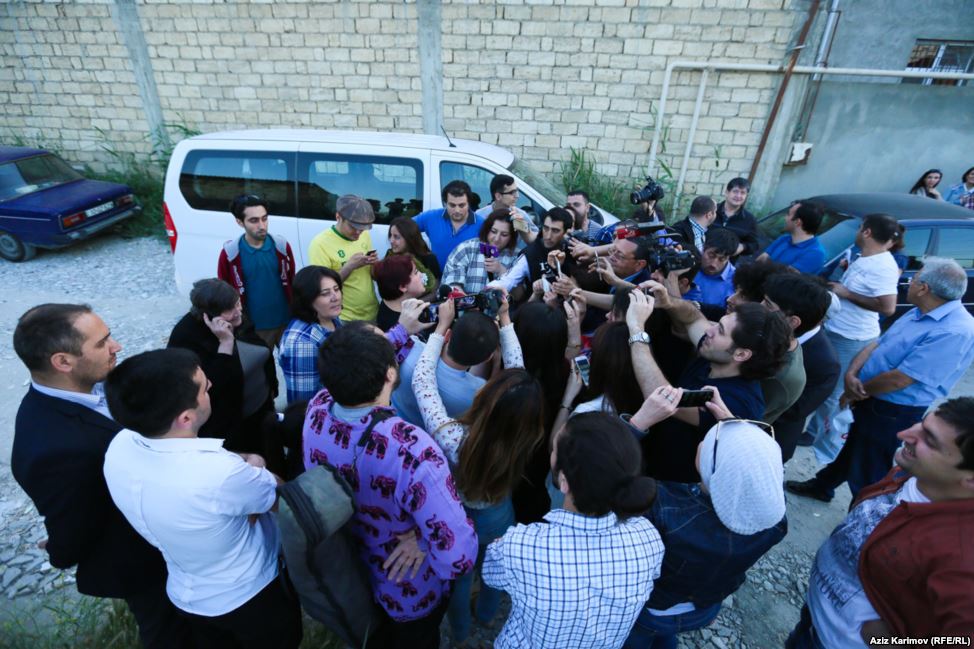 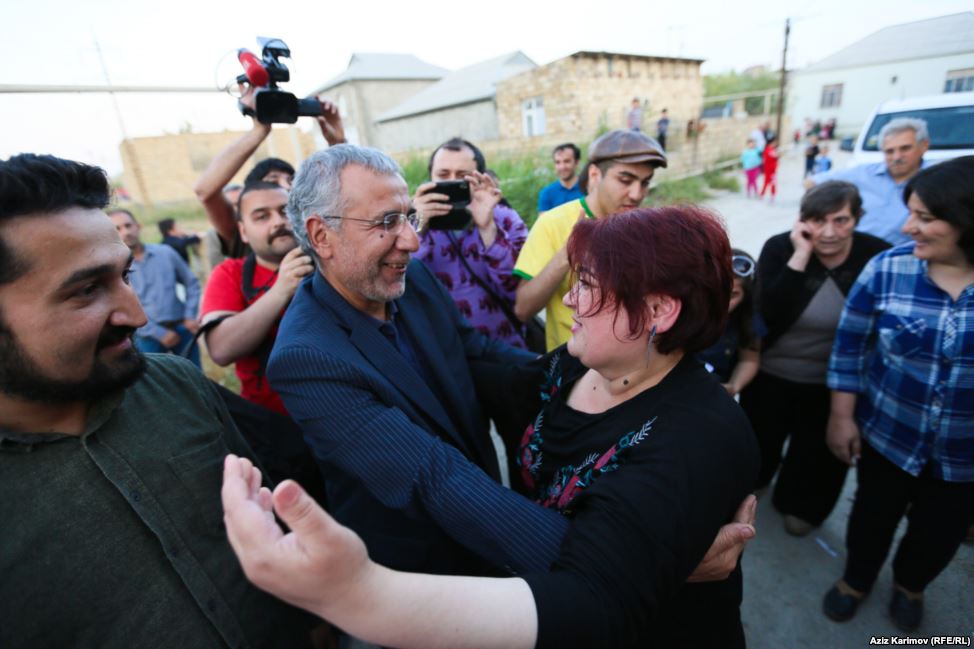 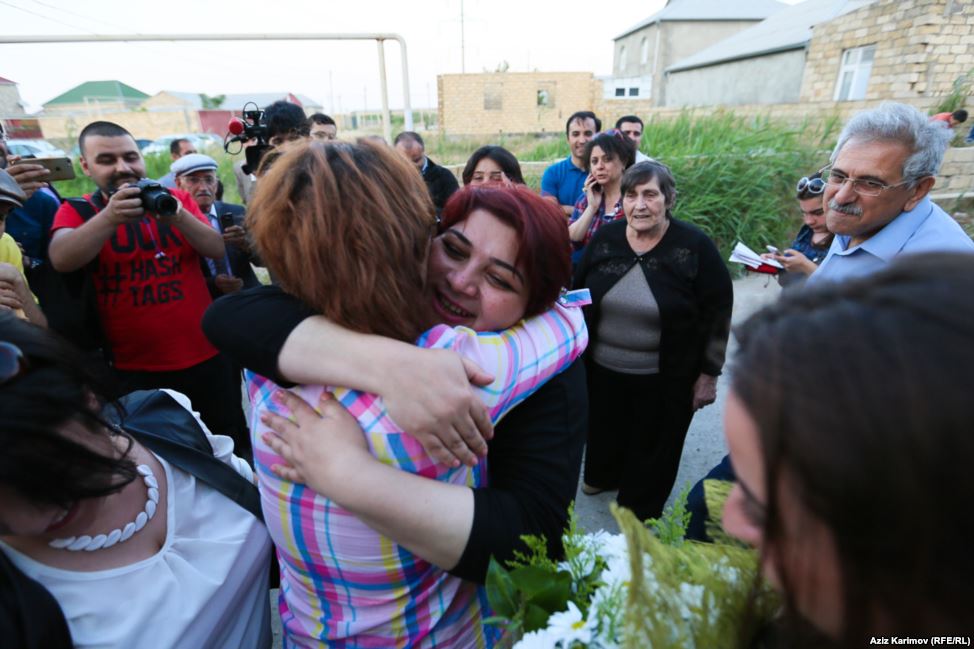 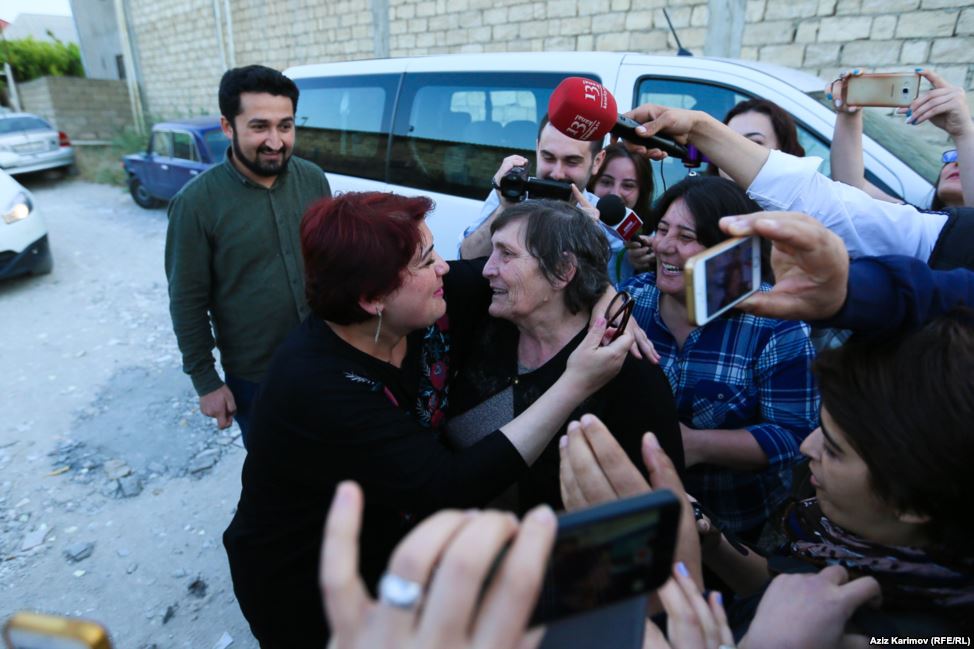 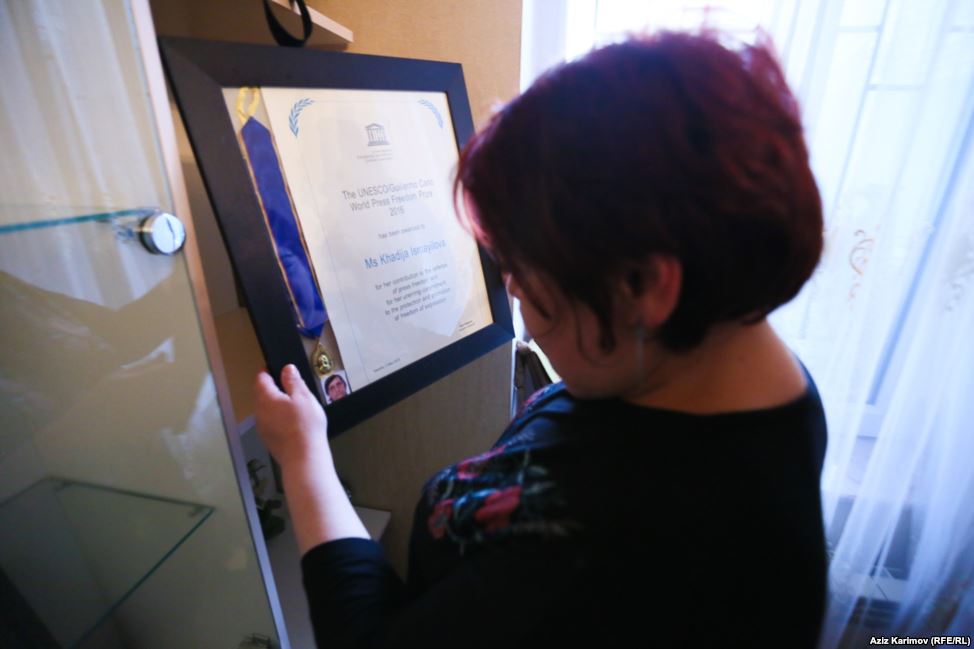 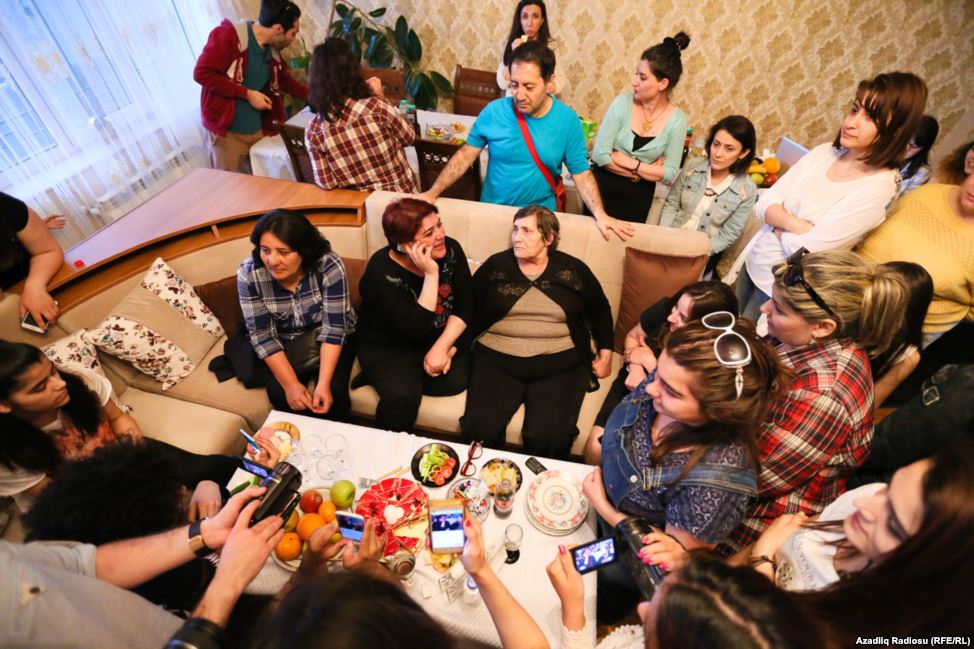 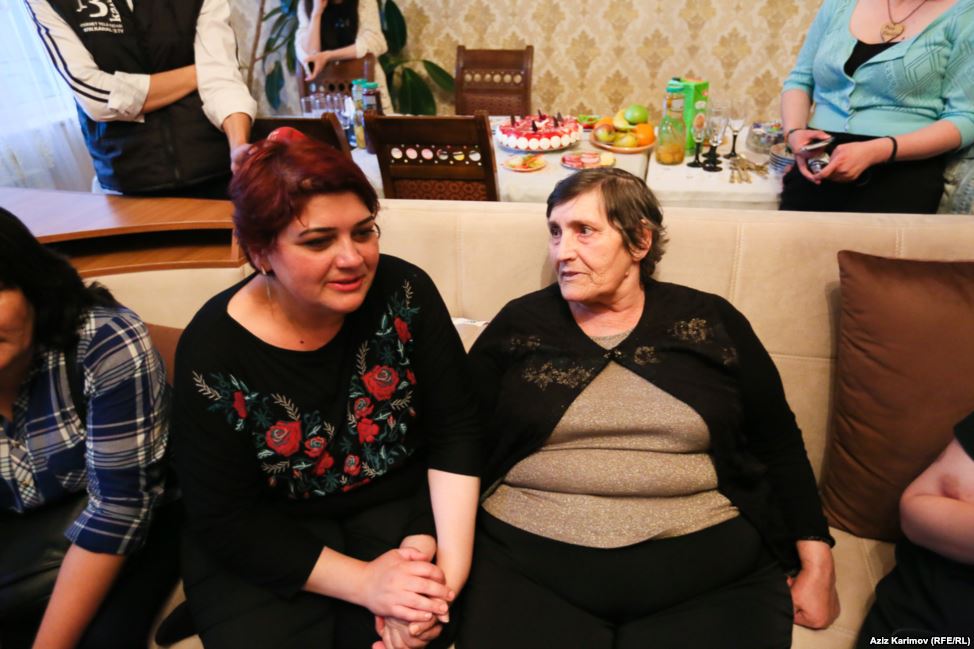