Azerbaijani President Ilham Aliyev ordered the state-owned gold company AzerGold to buy out four mining companies, including at least two owned by his own family. The deal bails the First Family out of a disastrous failed mining venture that had left gold unsold, workers unpaid and their personal companies in deep financial debt.

The family controls some of the country’s richest gold, copper and silver deposits. The people of Azerbaijan will now foot the bill for the family’s often incompetent attempts to mine the country’s mineral wealth – all at a time when the country is suffering a financial crisis.

The news was quietly released as the world was celebrating the long-awaited release from prison of Azerbaijani investigative reporter Khadija Ismayilova. Ismayilova, who has reported extensively about corruption by the First Family, has been in prison in Baku since her arrest on Dec. 5, 2014. She was set free after her final appeal hearing Wednesday at the Supreme Court of Azerbaijan, two days before her 40th birthday. 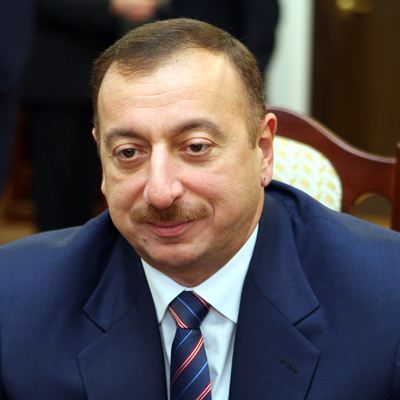 On May 25, Aliyev ordered state-owned AzerGold, formed in February of 2015, to take over the consortium of four companies which were operating in six gold fields worth billions of dollars. The companies include United Kingdom (UK)-based Globex International and three offshore companies:, Londex Resources S.A., Willy & Meyris S.A. and Fargate Mining Corporation. The order followed a request to the government by the consortium to sell themselves after months of seeking a private buyer or new investment.

The Panama Papers and earlier reporting by Ismayilova revealed that Globex International LLP and Londex Resources S.A., which control 56 percent of the four-company consortium, are owned by the president’s daughters, Leyla and Arzu Aliyeva. Londex Resources S.A. was the main operating company under the agreement, and has been responsible for negotiations with the government. The two other companies are owned by non-transparent offshore companies and could be owned by anyone, including the First Family. 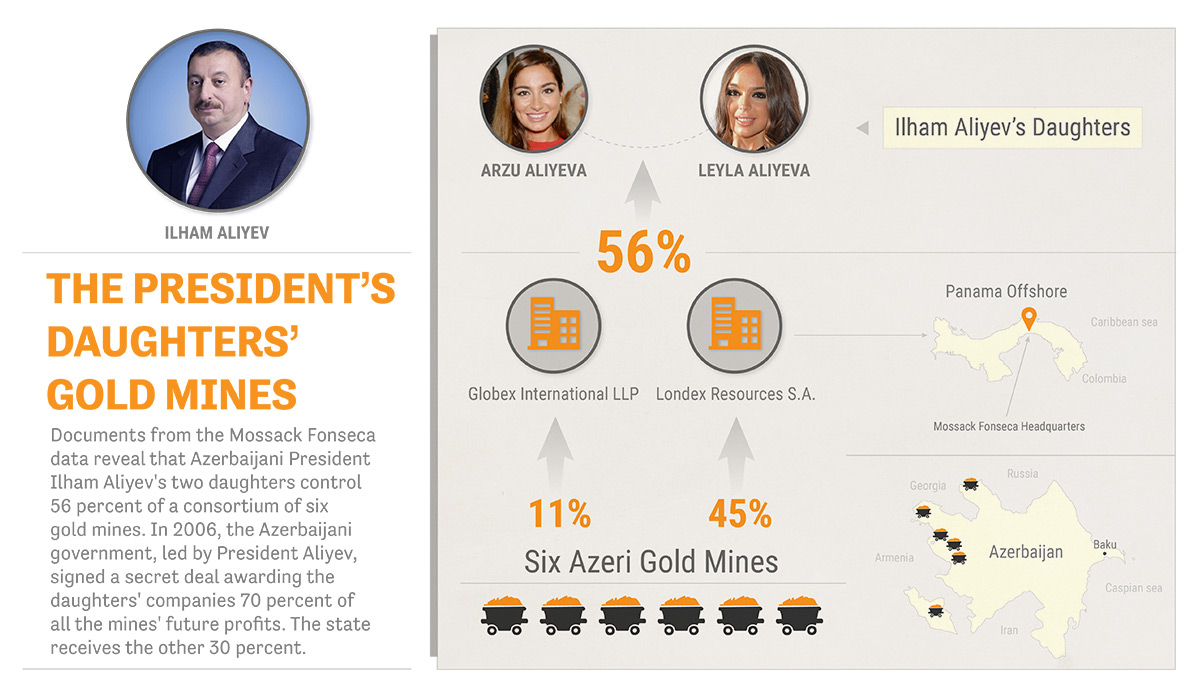 Aliyev tasked the Ministry of Economy, the Ministry of Finances and the Central Bank to prepare and submit to him proposals for financing the purchase of shares within two months. Azerbaijan has been struggling with massive budget deficit following the global drop in oil prices, and has even consulted with the International Monetary Fund and World Bank about loans to help it cope with mounting currency and budget pressures.

The president awarded the six gold fields to the consortium controlled by his own family in late December 2006. The contract was approved by the Parliament in June 2007, even though members of Parliament complained that the consortium’s ownership wasn’t transparent, that the contract did not follow normal bidding procedures, and that none of the companies had any history of actually mining anything. The parliamentarians complained that the deal worked against national interests.

Financial records obtained by OCCRP and RFE/RL show that the daughters’ Londex Resources S.A. spent nearly US$ 230 million to set up and operate the mining business. A factory was built in the mining town of Chovdar in western Azerbaijan, and the consortium produced as much as US$ 30 million in gold before it abruptly ceased operations in April 2014, leaving more than 300 employees in desperate conditions. Workers were put on leave and haven’t received their salary since.

The mining venture was never able to cash in on the gold it found. An investigation by the OCCRP and RFE/RL published earlier this year showed that the family had trouble selling gold on the world market due to its secretive ownership structure.

On June 27, 2014, Arda Arkun, then the chief executive officer of the consortium, emailed workers saying they would not be able to make salary payments “due to having no access to funding” and he expressed hope they would receive funding in the nearest future so that “we can restart producing gold.”

Workers never heard from the company again. They have been caught in a legal limbo because they were never officially laid off, and are therefore legally unable to take new jobs.

Miner Yahya Verdiyev, who spent two days in prison after a court sentenced him for not paying back a bank loan, wonders why the mine owners, who havn’t paid him in two years, aren’t in jail. The mine is owned by the President Ilham Aliyev’s daughters. (Credit: RFERL)

Carl Caumartin, a former CEO in the local operating company set up by the consortium and who had mining experience, told OCCRP that the consortium managers clearly did not understand the mining business and were making costly mistakes.

In January, February and March of this year, frustrated and desperate workers took to the streets of Baku in protests reaching out to every government institution they could think of - from the Ministry of Ecology and Natural Resources and the Ministry of Labor and Social Protection of Population to the Parliament and the president himself.

The government takeover ordered by the president will likely rescue the daughters’ investment. It is not clear how much money the family will recoup from the failed venture because the terms of the deal are not yet finalized. The Ministry of Economy, Ministry of Finances and Central Bank have two months to set the price.

It is unclear whether the government needed to buy the venture in the first place. The original contract required the consortium to pay the government a US$ 2 million bonus, a point trumpeted by government officials in early press reports of the deal. But financial records OCCRP obtained show that the consortium not only never paid the bonus, but is facing a US$ 2.8 million penalty for non-payment. While not paying the bonus represents a breach of contract that would allow the government to terminate the contract, the records show consortium members were not at all concerned about such an event. Auditors who examined the financial statements noted that the government never requested the payment.