Under Pressure: When Censorship Backfires

What is the best way to unintentionally spotlight an unflattering news story? Making it simultaneously disappear from multiple media outlets is a good start.

Miodrag Sovilj's story, “Favoritism for the daughter of RFZO’s Jorgovanka Tabaković” was posted on 021.rs, a Novi Sad broadcasting station, on December 9th. The story was removed three hours later, with a vague editorial explanation.

Author Miodrag Sovilj provided no comment, and instead deferred to the editor-in-chief of 021.rs, Slobodan Krajnović. Krajnović said that the article was vetted and accurate, but nonetheless was taken down because, simply, “that was our [editorial] decision at that time,” reports CINS.

According to Kontrapress, editors removed the article because of political pressures.

Sovilj’s story reported that the Novi Sad branch of the Serbian Republic Health Insurance Fund (RFZO) provided Milena Tabaković with a chauffeured car for a class in Belgrade twice a week.

Milena Tabaković is the daughter of Jorgovanka Tabaković, the head of the National Bank of Serbia (NBS) and the Vice President of the Serbian Progressive Party.

According to Kontrapress, the article also said that the RFZO used to require five years of relevant experience for assistant directors. The requirement then fell to two, and Milena Tabaković received the position with only 1.5 years of experience.

The 021.rs article thus implied that the daughter of the head of the National Bank of Serbia was receiving special treatment because of her mother’s political power.

Jorgovanka Tabaković and the director of the RFZO, Momčilo Babić, directly responded to the articles published about Tabaković’s daughter.

According to CINS, Babić said that Milena’s chauffeured transit did not demonstrate special treatment. He said that she was among 22 students sent for professional training in Belgrade. According to Babić, the RFZO regularly does this for their postgraduate health management students, and he said that sending an official vehicle was cheaper than paying for accommodation and food.

Jorgovanka Tabaković expressed greater outrage over the story. She said that the information regarding her daughter was a lie, and a direct and unfair attack spurred by Tabaković’s political position. Jorgovanka Tabaković said she only wants her child to be treated equally to others, and she threatened to sue all media outlets that broadcast the story, reports CINS.

The outcry from Jorgovanka Tabaković and the response from Babić may not have been noteworthy if it was not for the sudden and unexplained disappearance of the articles about Milena Tabaković’s alleged special treatment.

First, Sovilj ‘s article was removed from 021.rs. Then, articles covering the same story were taken down from two other media outlets, Alo and autonomija.info.

When CINS attempted to report on this disappearance, it found itself becoming part of the story.

On December 11th, CINS posted an article entitled “The Truth Has a Shelf Life,” which described the sudden disappearance of articles about Milena Tabaković and the cryptic explanation from 021.rs's editor.

Mysteriously, CINS’ own article was removed from their website. This may have been a technical glitch, but the article about Tabaković was the only one that disappeared, raising suspicions of potential hacking.

CINS was not the only media source that had such “technical difficulties.”

According to CINS, the editor of autonomija.info, Nedim Sejdinović, said that as soon as he posted the story from 021.rs, his site went down. When it was finally up and running again, the story about the bank director’s daughter was missing.

"I have no evidence that someone deliberately hacked the site because of this published news, but this is all very strange and I wonder if I should be paranoid," Sejdinović told CINS. 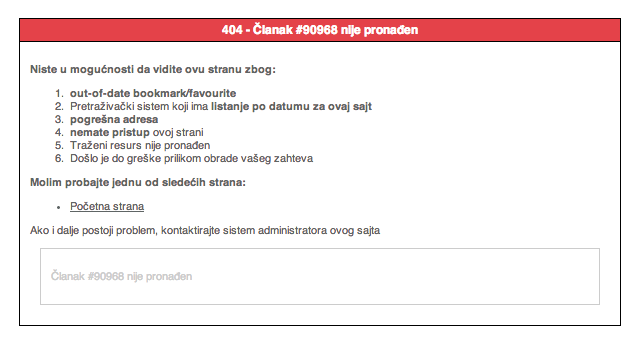 In a joint statement, the journalism associations stressed that this form of political pressure is unacceptable. They said, “this process is unprofessional and reduces down to self-censorship, which is always worse than censorship because it survives on the fear of reporters and editors.”

OSCE Representative on Freedom of the Media Dunja Mijatović also expressed concern over the removal of the Tabaković story.

In an OSCE press release she said, “Hacking websites and blocking access to media content is a clear violation of the right to free expression.” Mijatović added that she hoped the Serbian authorities would “do their utmost to protect the culture of free Internet that exists in Serbia.”

SHARE Foundation, a nonprofit organization focused on freedom of information, echoed her statement.

“As we have seen, an attempt to censor content on digital platforms often causes a counter-effect. When pressure and censorship fail, ‘different means’ are being used, even illegal, such as website hacking. In the case of CINS, the public was informed of the hacking and the text was quickly put back on the portal. What is the purpose of hacking then?”

At CINS, journalists themselves stressed the futility of the censorship. Citing the fervor with which Twitter, Facebook, and various blogs picked up the Tabaković  story and its subsequent removals, they said that the attempted censorship backfired. The decision of the editorial board of 021.rs to take down the article only fueled its circulation.

Vindicated, they posted, “The news is finally read by many more people than would have happened if it were not such a reaction of the editorial board.”