It was more than just a figure of speech. Economic jihad was Iran’s attempt to bypass the sanctions imposed in 2006 by the international community in response to the country’s nuclear program.

Now, reporters for OCCRP have discovered that a prominent Iranian-Turkish businessman who pledged allegiance to the economic jihad used both the Russian and Azerbaijani Laundromats to secretly transfer millions of dollars to a company implicated in sanctions-busting for Iran.

Between them, the two massive money laundering schemes – previously reported by OCCRP and partners – facilitated secret financial transactions of more than $23 billion. They were used to covertly pay European politicians and influencers to advance Azerbaijani political agendas, to buy expensive cars and luxuries for Baku and Moscow elites, and to avoid paying taxes in both countries.

Now, it appears, they were also used to evade international sanctions. The laundromats allowed Reza Zarrab, an Iranian-Turkish businessman, to secretly move money across borders with the help of Western European banks. 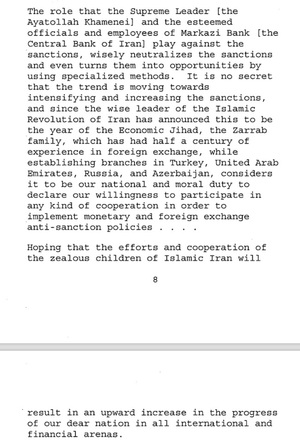 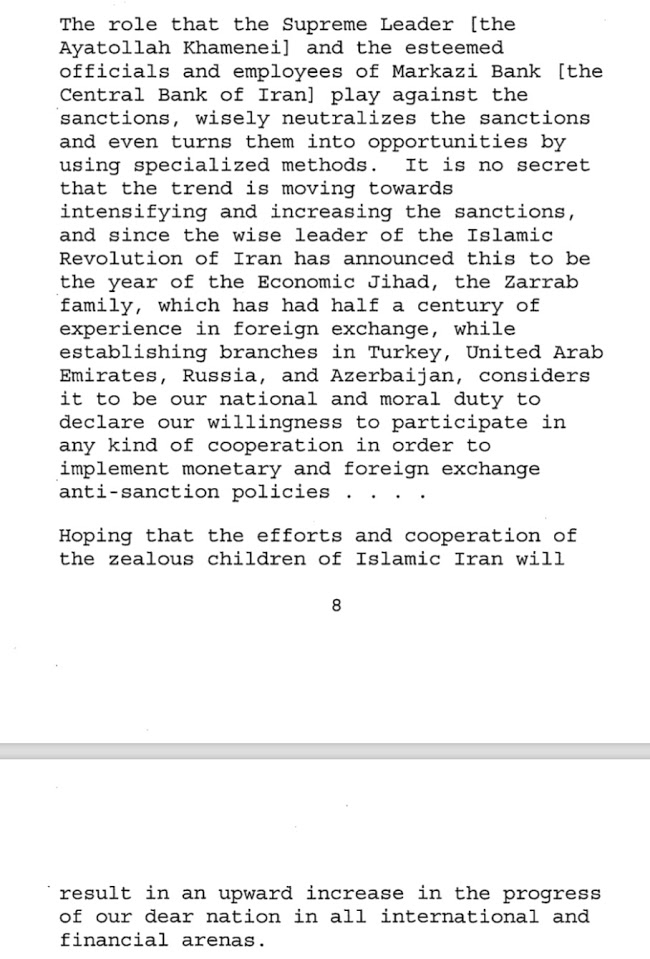 Credit: OCCRP A screenshot of an email that prosecutors say shows that Reza Zarrab wanted to help Iran circumvent US sanctions. (Click to enlarge)

A Pledge to Neutralize Sanctions

Zarrab has already found himself under investigation for sanctions-busting in the United States. A December 2011 draft email intended to be sent on Zarrab’s behalf, later found in his email account, contained a business proposal addressed to the Central Bank of Iran.

It read, in part: “It is no secret that the trend is moving towards intensifying and increasing the sanctions, and since the wise leader of the Islamic Revolution of Iran has announced this to be the year of the Economic Jihad, the Zarrab family, which has had half a century of experience in foreign exchange, while establishing branches in Turkey, United Arab Emirates, Russia, and Azerbaijan, considers it to be our national and moral duty to declare our willingness to participate in any kind of cooperation in order to implement monetary and foreign exchange anti-sanction policies.”

This email is an exhibit in an ongoing US court case in which prosecutors allege that a group led by Zarrab, a dual Iranian-Turkish citizen, orchestrated a scheme “to circumvent the prohibition on [Iran’s] access to the United States financial system.”

“The Zarrab Scheme,” as US authorities call it, used front companies located in countries like Turkey and the United Arab Emirates (UAE), as well as fake invoices and false or incomplete wire payment instructions, to conceal from US financial institutions the fact that international financial transfers – which appeared to be on behalf of Turkish and Emirati counterparts – were, in fact, taking place on behalf of the government of Iran and sanctioned entities.

The indictment of Reza Zarrab and several co-defendants, announced by Preet Bharara, then US Attorney for the Southern District of New York, on Nov. 7, 2016.
View on DocumentCloud

One of the main companies used in the scheme is the UAE-based Hanedan General Trading LLC, a paper company which appears to have been established solely to create a bank account. According to US prosecutors, Hanedan illegally moved more than $250 million through Bank of America, Deutsche Bank, J. P. Morgan Chase & Co., Citibank, HSBC, Standard Chartered, and Wells Fargo.

Zarrab, who was arrested in March 2016, is very close to Turkish President Tayyip Erdogan’s family. According to his bail application, between 2013 and 2016, the businessman donated millions of dollars to a charity named Togem-Der established by Erdogan’s wife, Emine.

His arrest angered the Erdogan government. An exhibit attached to the US court case quotes Erdogan as saying: “This is a person who exports gold… I know he’s contributed to the country.”

A year after Zarrab’s arrest, in March 2017, high-profile Turkish banker Mehmet Hakan Atilla, a deputy chief executive officer at Turkiye Halk Bankasi AS, was also arrested and charged with conspiring with Zarrab in the scheme.

This arrest, too, prompted swift and angry reactions from Ankara. Turkish Economy Minister Nihat Zeybekci told Bloomberg News, “At the very least, if there was a situation like this, [US authorities] could have shared it with Turkey in advance.”

Two sets of banking records obtained by OCCRP and the Danish publication Berlingske show that, in addition to the transactions already under investigation by US law enforcement, Hanedan was also used to move money via two banks in the European Union.

Between May and June of 2013, the Zarrab-controlled company received more than $4 million from the British-based LCM Alliance​ ​LLP,​ ​one of the core companies of the Azerbaijani Laundromat. (See: The Core Laundromat Companies)

The money was sent to Hanedan’s account in Dubai from an LCM Alliance account in Danske Bank Estonia. The transactions, five in total, list only an invoice number and contain no other explanation of the transfers’ purpose. The origin of the money, before it was funneled into the Laundromat, is unknown.

In May 2013, Hanedan received another installment of $1,587,056 from one of the main companies in the Russian Laundromat, the British-based PR-Vert System Ltd. The money arrived in the same account held by Hanedan in Dubai from Trasta Komercbanka, a Latvian bank shut down for money laundering after OCCRP exposed the Russian Laundromat. (See: Latvian Bank Was Laundering Tool)

Both LCM Alliance and PR-Vert System are companies designed to conduct secretive banking. Their real owners are hidden.

On the same days that Hanedan received money from LCM Alliance, several other Dubai and Turkish companies sent or received money to or from the Azerbaijani Laundromat company. These transactions list similarly cryptic invoice numbers for the transfers’ purpose, just as Hanedan does. 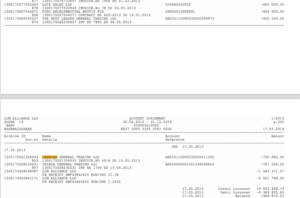 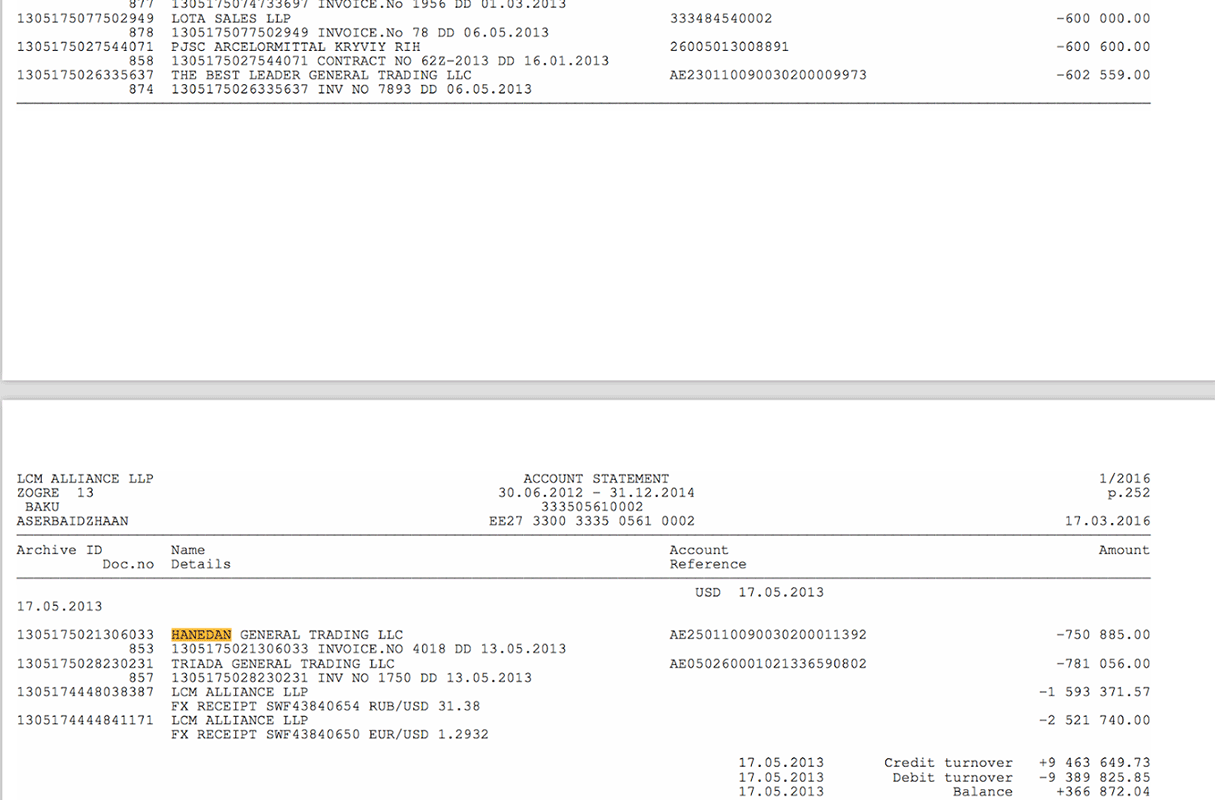 Credit: OCCRP A screenshot of LCM Alliance's account statement from May 2013 shows that, even as the Azerbaijani Laundromat company made a large transfers to Hanedan Trading, it made other, similarly mysterious transfers to other companies.

The list of UAE companies that appear in the Azerbaijani Laundromat records can be consulted by following this link and choosing United Arab Emirates in the country drop down menu.

Earlier this month, the Zarrab case turned became hugely problematic for the Turkish government when the U.S. Attorney’s Office in the Southern District of New York indicted Mehmet Zafer Caglayan, the country’s former economic minister. He is charged with participating in the scheme.

After the indictment was announced, Turkish government spokesman Bekir Bozdag said that Caglayan protected Turkey’s interests as minister and acted within the scope of Turkish and international law.

According to Reuters, the spokesman said that the charges against Caglayan were a coup attempt by the American judiciary.

Ricardo Gines contributed to this report.

Correction, Oct. 3, 2017: The story was corrected to reflect the fact that LCM Alliance is an LLP – a limited liability partnership company. OCCRP regrets the error.​