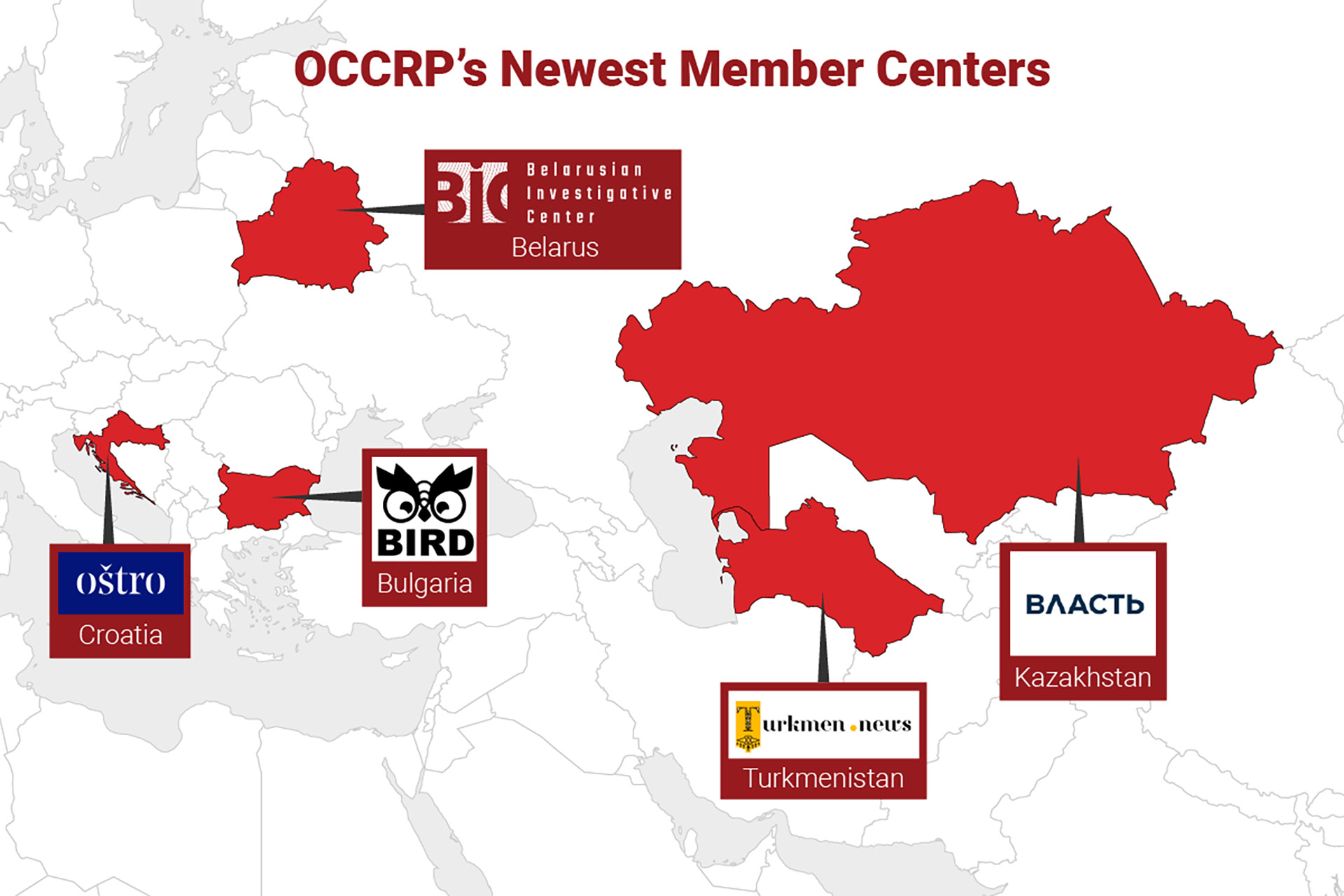 Four of the member centers represent coverage in new countries for OCCRP: Turkmen.news in Turkmenistan; Vlast in Kazakhstan, Belarusian Investigative Center (BIC); and Oštro in Croatia. The Bureau for Investigative Reporting and Data (BIRD) expands OCCRP’s presence in Bulgaria.

“OCCRP helped pioneer cross-border, collaborative investigative reporting that leverages local expertise,” said OCCRP Publisher Drew Sullivan. “The addition of these new member centers to our network helps us build a better understanding of how regional actors and networks fit into the larger web of global crime and corruption.”

The relationship between member centers and OCCRP is symbiotic. In the face of rising costs and continued threats to independent media, OCCRP provides member centers with a range of critical resources, including digital and physical security tools. In turn, journalists in our network learn from each other as they work together across borders.

Turkmen.News is an independent media and human rights organization founded in 2010. It is dedicated to promoting freedom of speech and the rule of law in Turkmenistan, one of the most repressive countries in the world. Turkmen.News publishes independent news and analysis, exposes grand corruption and nepotism, monitors the use of forced labor, and reports on human rights violations.

Established in 2012, Vlast is one of the few independent media outlets in Kazakhstan. It publishes news, analysis, and commentary on politics, economics, and social issues, and works on local and international investigations.

BIC produces biweekly investigations about corruption, a weekly fact-checking show, and a weekly analysis of economic news. BIC journalists have won the "Free Word" award for investigations and analysis from the Belarusian Association of Journalists every year since BIC was founded in 2018.

THE BUREAU FOR INVESTIGATIVE REPORTING AND DATA (BIRD)

BIRD is an independent project that uses data journalism to uncover conflicts of interest, corruption, and abuse of power. BIRD publishes investigative stories and maintains a public search engine with data on politically exposed persons, companies, public procurement, European funds expenditures, and other public information. The BIRD web site is published by the French nonprofit DRJI - Data for Reporters, Journalists and Investigations.

Oštro Croatia is an investigative journalism center that covers topics of public interest and importance in Croatia and the Adriatic region. It is the sister organization to Oštro Slovenia. Both branches of Oštro nurture investigative and data journalism in the country, champion the “right to know” as a fundamental human right, and aim to cultivate future generations of journalists.