Bosnia is not alone in its struggle with tobacco smuggling.  Nearly the whole world engages in smuggling in some form.

Bosnia and Herzegovina (BiH) is a cog in the regional tobacco smuggling machine, but even that machine is part of a larger global tobacco smuggling trade. Some 600 billion cigarettes are illegally manufactured or smuggled worldwide per year  –  the equivalent of one pack out of every ten.  Along with the Balkans, other hotspots of the illegal trade include China, Malaysia, the United Arab Emirates, the Ciudad del Este region of Paraguay and others. 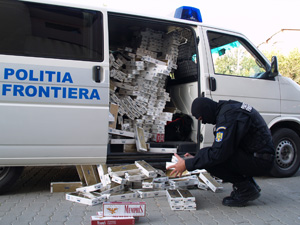 Smuggling
According to the Framework Convention Alliance, a group of 300.
organizations seeking to curb the problem, governments worldwide lose $50 billion in lost taxes.

The situation that makes smuggling possible is the huge discrepancies in price between Southeast Europe and Western Europe. A pack of Marlboros that sell for 3 KM in BiH sells for between 10 and 15 KM in most large European cities. The difference is largely due to taxes that are low or easily avoided in most Southeast European countries. Local brands are also smuggled within the region to exploit tax differences between countries.

Among Southeast European countries, Serbia has been the most aggressive in prosecuting smugglers, having issued a series of high profile indictments. Montenegro is still a major smuggling hub, with its top leaders involved directly or indirectly in the trade while aggressively insisting otherwise. Kosovo and Macedonia both have serious smuggling problems, although more with drugs than tobacco. New European Union (EU) members Romania and Bulgaria haven’t yet solved their problems, which are linked to political corruption involving duty free shops.

BiH faces many of the same problems as its neighbors: inadequate resources for law enforcement, political corruption and a lack of political will to stamp out the problem. The cost to BiH is high. The country loses hundreds of millions of KM per year in lost tax revenue. 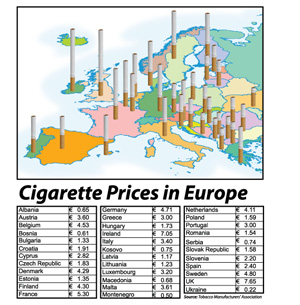 Counterfeit cigarettes, according to a study at Scotland’s St. Andrew University, have many times the levels of cadmium, lead and arsenic as regular cigarettes. They also have double the tar and nicotine, making them more harmful to smokers.

Serbia still has a smuggling problem, with cigarettes smuggled into Serbia from Bosnia and out of Serbia into Romania. It is, however, one of the few countries in the region that has issued indictments against major cigarette smugglers, even if many of the cases are more than a decade old.

In June 2007, the Public District Prosecutor’s Office in Belgrade, in cooperation with the Serbian Ministry of Interior, started cracking down on large organized crime groups that were commonly known as the "tobacco mafia."

After an investigation that lasted more than two years, police working on Operation Network arrested or issued arrest warrants for members of three groups.

The first arrests included eight of the 15 members of what police alleged was an organized crime group run by Stanko Subotić (aka Cane). Police say Subotić, a Serbian businessman alleged by prosecutors and media as one of the most prolific smugglers in the region, made roughly 65 million KM in profits at the time.

Among those arrested in Subotić’s group were the former Novi Sad police chief, Miodrag Zavišić, and a former state security chief for Novi Sad, Milan Popivoda.

The Subotić group allegedly imported unregistered cigarettes via Subotić`s company MIA, based in the village of Ub, and sold  them on the black market between 1995 to 1996, police said.

An investigative judge of the Special Court in Belgrade ordered the arrest of a second group of alleged smugglers headed by Mirjana Marković and Marko Milošević, the wife and son of former Serbian dictator Slobodan Milošević. Marko Milošević in particular has been associated with a number of cigarette smugglers, many of whom were eventually murdered.

The court also ordered the arrest of other Milošević associates including Valentin Petrov, the owner of two shipping companies from Dimitrovgrad, Miodrag Pravilović and Predrag Jovančić, employees of the Tref rent-a-car firm, and for a former employee of Serbian customs, Lazar Šarac.

A third gang of alleged cigarette smugglers, operating from 1996 to 1998, were former Niš police chief Radisav Gvozdenović, Petar Milenković, an adviser to former federal customs head Mihalj Kertes, and Siniša Stojčić, brother of former Public Security Service Chief Radovan Stojćić (aka Badža), who was shot and killed in Belgrade in 1997.

Interpol arrest warrants were issued for the suspects still at large, including the Milošević family and Stanko Subotić. The Milošević’s are currently living in Russia.

Montenegro continues to play a large role in regional smuggling, creating difficulties for all of its neighbors. With the reappointment of Milo Đukanović as Prime Minister, who Italian prosecutors say has been responsible for running or tolerating a significant smuggling operation, things may not improve.

BiH Police repeatedly told reporters that Montenegro is the major source of smuggled cigarettes, although Montenegrin officials denied much smuggling still exists. BiH police say local residents are hired to carry smuggled cigarettes into Bosnia on their backs, hidden in cars, or by illegal roads connecting the two countries.

The biggest problem has been duty free shops, which were the source of many of the illegal cigarettes. Saša Govedarica, a policeman in the border town on Trebinje, says one duty free shop in Montenegro near Foča sold € 500.000 worth of cigarettes in one month, a figure Govedarica said was suspicious because the shop was small and had only light traffic.
Govedarica suspects that most of those cigarettes were smuggled.

The duty free shops where closed until 2005, when Đukanović and his cabinet reopened them to help ‘tourism.’

In December, at the same time Montenegrin officials were saying smuggling did not exist, a board member of Podgorica-based Rokšped, a supplier of cigarettes to Montenegrin duty free shops, was arrested in Belgrade for cigarette smuggling. After years of pressure from the EU, Montenegro closed the shops in January of this year. How long they will remain closed remains unclear.

Croatia is a transshipment country for cigarettes heading from BiH and Montenegro into Western Europe.

It is also involved in local smuggling. Rovinj, the powerful Croatian cigarette monopoly that produces Ronhill, has benefited greatly from a BiH law that keeps taxes low on cigarettes imported to Bosnia from Croatia. The reverse is not true, however, and almost no Bosnian cigarettes are exported to Croatia. Croatian law slaps a 2.5 KM per pack tax on cigarettes that do not use Croatian tobacco.

In other countries, cigarette manufacturers and importers have worked together to export the cigarettes on paper, but they never leave the country. The cigarettes are then sold through other channels. There is no need to smuggle them back in.

"One of the important sources of illegal cigarettes in the Romanian market is the duty free shops." says Iulian Butnaru, a representative of the Romanian Customs. 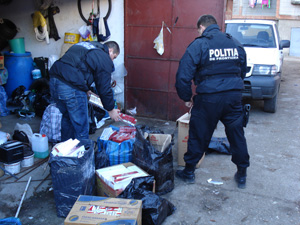 Smuggling
Another source is Ukraine, where cheap Ukrainian brands, fake cigarettes and smuggled international brands find their way into Europe. Bulgaria has a similar problem.

On the border between Serbia and Romania, a host of shops sell cigarettes to travelers going into Serbia. At first glance, the arrangement little sense because cigarettes are cheaper in Serbia. In reality, these shops record huge sales of cigarettes that may never even see the inside of the shop. Customs and Border police say these tax free paper sales are for cigarettes delivered elsewhere in Romania.

Both Romania and Bulgaria closed their duty free shops as they entered the EU in 2006, but politicians found a way around the closures. In Romania, an interim government that ruled for just two weeks when Romanian president Traian Basescu was suspended in the spring of 2007 used its temporary authority to reopen the shops. Pressure from wealthy politicians and criminal groups has kept them open.

In Bulgaria, the closure lasted only a few months. Under intense lobbying and pressure from the operators of duty free businesses, parliament reversed their earlier decision despite opposition from law enforcement.

The European Commission released an interim report in February of 2007 that concluded Bulgarian duty free shops were “tolerated” despite evidence they were seeing substantial turnover. The report called them focal points for organized crime and local corruption. Under this latest EU pressure, the Bulgarian government changed its mind once more. They plan to shut down the shops again soon.

In Bulgaria, duty free shops are represented by Vassil Bozhkov, one of Bulgaria’s wealthiest businessmen. Bozhkov runs the Association of the Enterprises for Duty Free and Travel Retail Trade. Also on the board are wealthy casino owners, advisors to former Prime Ministers, and businessmen that have been investigated for smuggling.

In Romania, for example, the Minister of Transport’s brother controls lucrative duty free shops that are routinely raided by authorities for illegal sales.

BiH, Serbia and Croatia do not allow duty free shops on their land borders.