How the Guptas Milked South Africa for Diamonds

Under recently ousted President Zuma, the Gupta family made millions in South Africa. Some of that money may have been used to purchase diamonds in a scheme which defrauded a state program to help poor black dairy farmers. 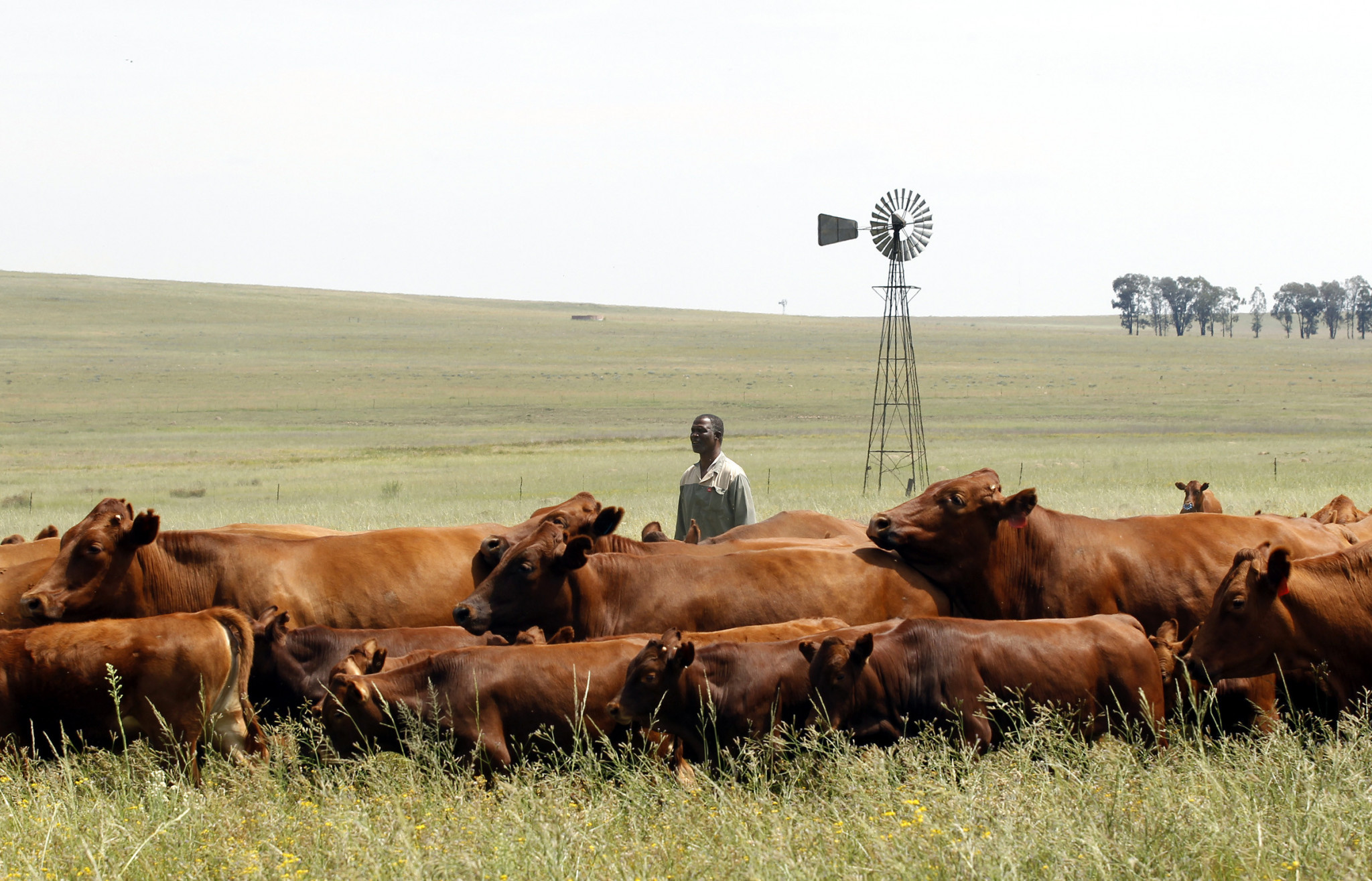 Koos Mthimkhulu, a black cattle-farmer, inspects his herd at his farm in Eastern Free State Province, South Africa, 2012. Mthimkhulu was born on a white-owned farm, and at the end of minority rule in 1994 was selected for a reform program whereby the government bought agricultural land from white farmers and handed it over to blacks with legitimate claims on the territory. Photo: Reuters / Siphiwe Sibeko

Until a couple of years ago, Shrenuj Group was one of India’s largest diamond and jewelry manufacturers. But to South Africans, Shrenuj may soon have a less glittering claim to fame — documents obtained by the Organized Crime and Corruption Reporting Project (OCCRP) show that the company was among those that received South African state funding stolen by the disgraced Gupta family.

In what was the country’s first legal action against the Indian-born tycoons, their associates, and their group of companies, the high court heard from state prosecutors that case involved “proceeds of crime.”

The prosecution argued that some 220 million rand (US$ 15.5 million) out of over half a billion rand in state funds allocated to the now infamous Estina dairy project had been stolen by the Guptas and their related entities. The farm, a project of the Free State provincial government, was intended to assist the province’s poor black farmers.

But those vulnerable farmers are still waiting for what they were promised. A portion of the stolen money — 4.5 million rand ($317,800) — was transferred to Uxolo, a South African subsidiary of Shrenuj. The remainder was siphoned by the Guptas through suspicious transactions to other entities identified in a previous OCCRP report as being under their control.

That investigation, published by OCCRP and The Hindu on February 27, revealed how the Johannesburg branch of the Indian Bank of Baroda handled hundreds of millions of dollars in transactions tied to the Guptas. The brothers’ allegedly corrupt dealings with former South African President Jacob Zuma and his family, specifically his son Duduzane Zuma, led to the president’s resignation on February 14.

Duduzane has since been arrested on conspiracy to commit corruption and his passport seized. He was later released without charge, and then left the country.

In the case against the Guptas, South Africa’s Asset Forfeiture Unit claimed that Shrenuj subsidiaries had received the Guptas’ stolen millions at its Bank of Baroda account. Though Baroda transactions, reviewed separately by reporters, don’t indicate their origin, they do confirm that two Shrenuj subsidiaries that held accounts at the bank had indeed received millions of dollars in deposits.

The case before the high court is now in limbo, with the judge ruling that prosecutors had not sufficiently proven their case, but that there was enough evidence of wrongdoing to keep the Guptas’ assets restrained or “frozen.” Meanwhile, a separate inquiry that is looking into the Guptas’ so-called “state capture” of South Africa — including the funds at issue here — is proceeding.

The Guptas are still at large (they have since fled the country along with Duduzane Zuma). However, Shrenuj is no longer with us. In a move which its executives insist was entirely unconnected with the Gupta scandal, the company declared bankruptcy last year.

So how does one turn funds for a dairy farm into diamonds — and to what end?

The story began in the small farming town of Vrede in South Africa’s Free State, a sprawling province of rolling hills and pastures that borders Lesotho. In 2013, the Free State government launched a project with a simple goal — to create a cooperative for small-scale black farmers previously disempowered by apartheid. Locals interested in becoming “empowered” would sign up, receive training, and have the opportunity to join the cooperative.

All that was needed was capital from the provincial government — half a billion rand, according to initial estimates — and a private contractor to carry it out.

And while a handful of trainers arrived to help empower the locals, the vast majority of the promised funds never did. Instead, the contractor, a Gupta company called Estina Pty Ltd, walked away with the money while the fields lay fallow. According to the Asset Forfeiture Unit, just 2.4 million rand was actually invested in the project.

The case was politically significant as it represents the country’s first legal action connected to the “state capture” scandal, which has rocked the country for months. Nevertheless, the Gupta brothers appear to have won round one, with the court ruling that 180 million rand ($14.4 million) of the 220 million the Guptas are accused of stealing may be unfrozen, according to media reports. OCCRP reporters, however, were told the assets were still under restraint.

That money seems to have been parceled out piecemeal to various front companies and persons within their business empire — some of it less obliquely, such as the ten million rand ($800,000) Atul Gupta, one of the three Gupta brothers, received directly. 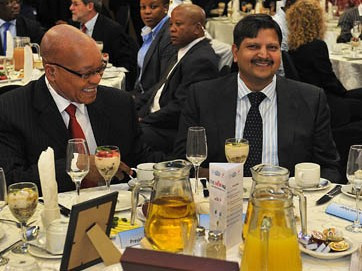 Transaction records from the Bank of Baroda obtained by reporters (and detailed in the earlier investigation) shed further light on some of the Guptas’ transactions, covering a portion of the stolen funds under investigation by the court.

The records show that Estina held an account at the bank — and that 140 million rand ($13 million) was deposited into this account between July 2012 and August 2014. (Because of the form in which these records are structured, it is not possible to identify the source of Estina’s funds.)

Neither do the existing records indicate where the money was sent. But sums of identical value appeared in other Bank of Baroda accounts held or controlled by the Guptas, often within days.

Out of all the banking options present in South Africa, Estina’s use of a Bank of Baroda account, a state-owned Indian bank, suggests the company’s extremely close ties to the Guptas’ business empire. The bank had long taken a lax approach to their illicit dealings, with its officials routinely voiding warnings of suspicious transactions raised by South African authorities. The Guptas dominated the bank to such an extent that the majority of its financial transactions were theirs.

In the high court case, prosecutors claimed that Estina — ostensibly founded to carry out the agricultural cooperative project envisioned by the state — had been a shell company all along, established by the Guptas to steal agricultural subsidies. Corporate records show that the company had no established track record as an agricultural enterprise.

Attempts to seek comment on the fate of the dairy money from the Guptas themselves and from Baroda’s South African branch were unsuccessful. For its part, Shrenuj responded that the court order contained an “error in [its] assessment… Shrenuj Group, or its employees, have never been engaged in any transaction, business or otherwise, with the Gupta brothers or any of their entities. We categorically deny any affiliation or association with Estina or Gupta brothers. ... The money drawn was used to pay outstanding obligations within the diamond business operations of Uxolo [A Shrenuj subsidiary in South Africa which received the funds] and there was no third party beneficiary.” 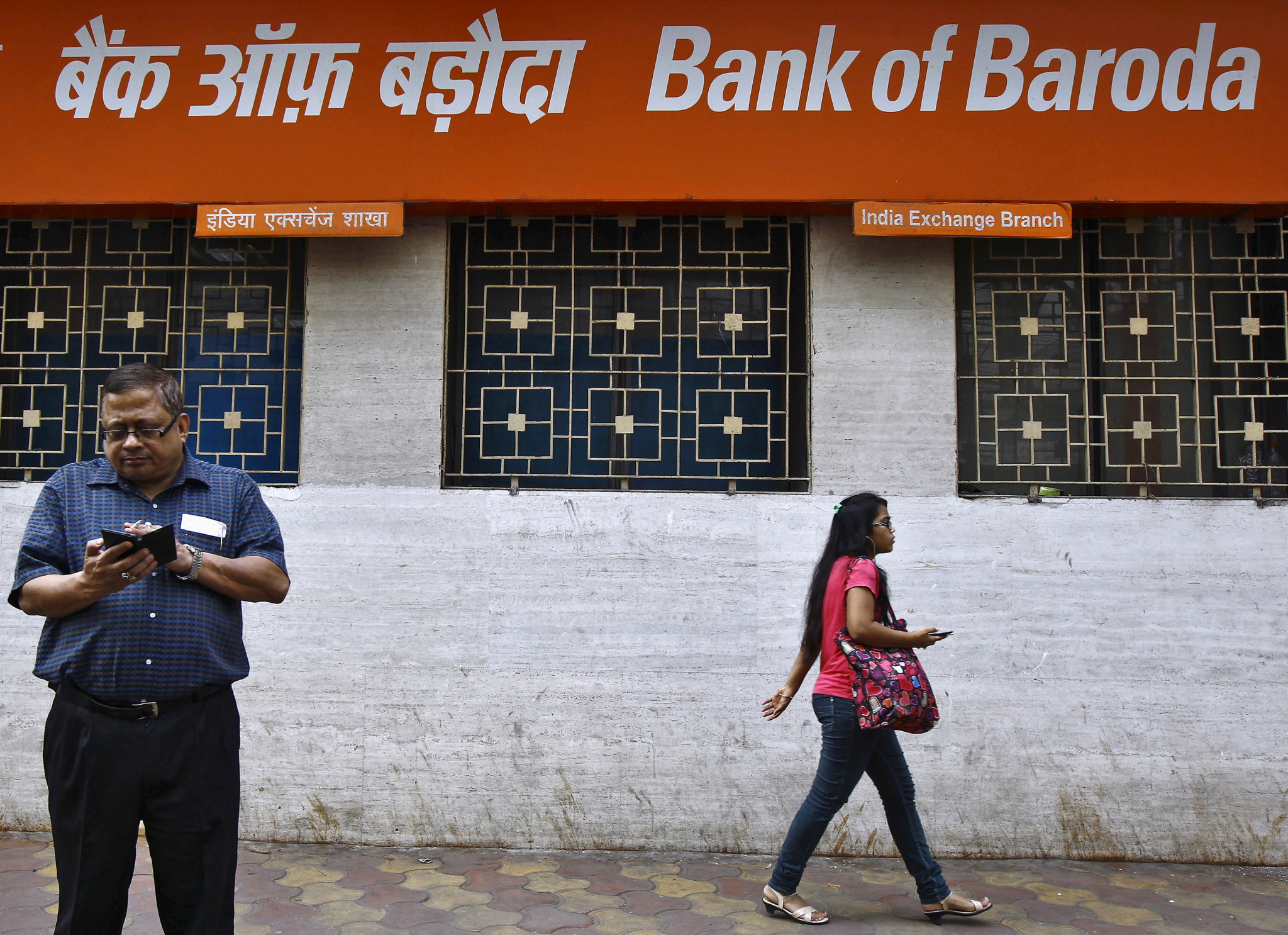 A commuter walks past an advertisement of Bank of Baroda in Kolkata, India, November 2015. The bank was once India's second-biggest state-run lender by assets. Credit: Rupak de Chowdhuri / Reuters

Diamonds Are a Gupta’s Best Friend

If you’re seeking to launder illicit funds, whether stolen from a dairy farm or anywhere else, diamonds are perfectly suited for financial skulduggery.

The trade in diamonds differs from the trade of any other mineral in that the value of the gems is determined subjectively by buyers and sellers, with very little oversight from external regulators.

As such, companies or individuals trading in diamonds can easily manipulate their values in different jurisdictions — a technique that can allow them to dodge taxes, shift profits abroad, or launder money.

So it’s noteworthy that the transfer between Estina and the two Shrenuj subsidiaries is far from the only connection between the Guptas and diamonds. The brothers have also tried to purchase a diamond mine in Lesotho.

HSBC bank records flagged as being related to the Guptas and seen by reporters show that the family also shifted money to a Hong Kong-based firm, Simoni Gems, that describes itself as a major supplier of fancy shaped diamonds on its website.

It is difficult to definitely establish what real business, if any, this company may be engaged in. Little information could be found about it beyond its website.

The firm, which held accounts at HSBC, shares a telephone number with Fancy Star, a Dubai-based company registered as a commodity trader. Dubai is not just the world’s premier hub for laundering illicit diamonds; it is also a jurisdiction that, according to the Gupta leaks, played a major role in the brothers’ laundering of billions of dollars from South Africa.

In April, South Africa’s national prosecuting authority stated that it believes that millions of rand stolen by the Guptas from the Estina dairy farm indeed ended up in Dubai.

According to Indian corporate data, Simoni Gems is also registered in the country under a different name — Shivani Gems — which, though listed as a furniture manufacturer (and originally launched as a media company), presents itself as a diamond trader.

Shivani has an outlet in the United States — a country to which the Guptas appeared to regularly funnel money via other companies with HSBC accounts. The directors of Shivani Gems include several people with the Gupta surname which corporate data shows had been marked as “politically exposed persons.” Atul Gupta's wife is named Shivani.

“If the Guptas criminal network exploited the diamond trade for money laundering purposes, they wouldn’t be the first,” says Hennie van Vuuren, an anti-corruption activist and director of Open Secrets, a South African NGO. “Investigative journalists and government agencies have shown how diamond-trading behemoths like De Beers have historically undervalued diamonds and thereby effectively defrauded tax authorities and the treasury. What we see here may well be more of the same.”

With South Africa still reeling from the scale of the Gupta scandal, the ultimate fate of Estina’s dairy money deepens concerns about the role of the Bank of Baroda in facilitating the brothers’ mass embezzlement of state assets.

If these stolen funds have indeed been converted into diamonds, they’ll be a headache for authorities to trace, and a nightmare to return to the state’s coffers to be spent as originally intended.

A sweet opportunity for the Guptas became another sour promise for the country’s poor black fairy farmers — still poor, and still waiting.

Clarification (August 25, 2018): This story has been updated to more clearly convey the fact that Simoni Gems is not a Gupta entity.