Reporters for OCCRP have found evidence that pro-Kremlin agents are using an online petition tool on www.whitehouse.gov, a US presidential website, in an attempt to covertly influence US policy. 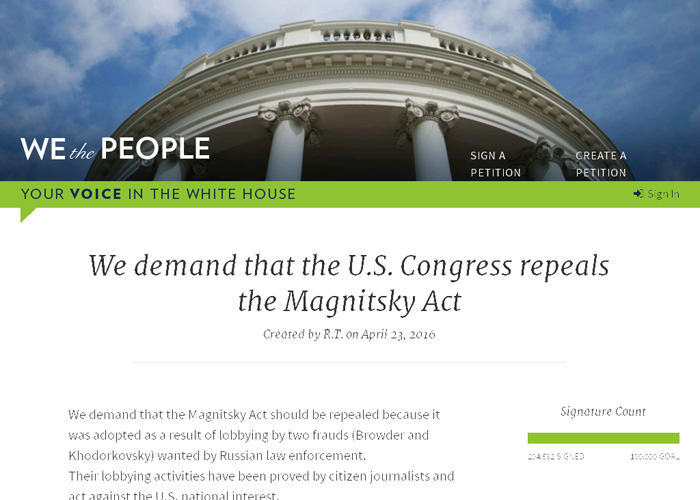 A closer look at the effort gives a better understanding how trolls are used to propagandize Russian citizens with misinformation about the West.

One US target is the Magnitsky Act, a law passed by the US Senate in 2012 to sanction those allegedly involved in the death of Sergei Magnitsky, a Russian lawyer who died in police custody after exposing a multimillion-dollar tax fraud by Russian officials.

The Kremlin has fiercely opposed attempts by US lawmakers this year to expand the Magnitsky Act.

The second target is Mikhail Khodorkovsky, a wealthy businessman who fled Russia after his release from prison in 2013. The attack on Khodorkovsky came in June as his Open Russia foundation unveiled two dozen candidates to run in the parliamentary elections to the Russian Duma that will be held in September.

“A Mockery of Democracy”

On April 23, a petition was posted to the whitehouse.gov website by an individual using the initials R.T. who demanded the repeal of the Magnitsky Act. The writer claimed the act “discredits the US legislature” and that it was adopted on the basis of lobbying by “two frauds” in Russia, referring to Khodorkovsky and Magnitsky’s employer, Hermitage Capital founder Bill Browder.

Reporters for OCCRP found that much of the petition’s content had previously appeared in a April 19 Facebook post by Ilya Ukhov, a man described in the Russian press variously as a blogger, journalist and sociologist.

Hours after his Facebook post, Ukhov appeared on the television show Russia 24 to discuss the documents, described by the host as “irrefutable proof that Browder spent vast sums of money in the US in order to bring sanctions against Russia”.

Ukhov’s post was then re-worked into an article on the pro-Kremlin Life.ru on April 22, a day before the White House petition appeared. The news website Lenta.ru then wrote about the petition and named “sociologist” Ukhov as the man responsible for the findings mentioned in the petition.

The article also announced to its Russian audience that the petitions posted on whitehouse.gov do not require signatories to prove their identity and “don’t require proof of US citizenship.”

Within a few weeks, the petition attracted more than 200,000 signatures; a threshold of 100,000 triggers a mandatory response from the White House via the “We The People” team. However, the White House’s reaction was a recommitment to the Magnitsky Act.

Ukhov then wrote an indignant article for Life.ru describing the petition’s failure as a “Mockery of Democracy.”

But who is Ukhov?

In May of this year, Ukhov was featured in a televised debate with the veteran opposition reporter, Oleg Kashin, on the Russian channel TV Rain. Ukhov had come to discuss his blog, which alleged that non-Kremlin affiliated outlets such as TV Rain were linked to foreign governments.

Ukhov was on the attack against both the station and Kashin himself. “People living in Russia should know why you’re hiding, why you don’t want to openly come out and say: ‘Yeah, we work with a foreign propagandist American agency’?” he said.

He stressed his impartiality: “This is something like a hobby. I don’t specialize in this … This is actually interesting to me purely from a civil, social position.”

However, Ukhov may not be so disinterested.

He has a past career as a  pro-Kremlin troll, according to a 2012 leak of emails from Kristina Potupchik, who according to the Guardian organized troll activities for a pro-Kremlin group. According to those documents, Ukhov was part of a work group that targeted Russian opposition figures such as Boris Nemtsov, the pro-democracy politician gunned down last year in Red Square, Aleksei Navalny and Oleg Kashin – the same man he challenged on TV Rain.

Soon after the Ukhov-linked petition was published in the US, another sprang up on whitehouse.gov on a similar theme. It was created on June 14 by someone who used the initials D.F. and called for the US Attorney General to investigate allegations of payments being made by Mikhail Khodorkovsky, a wealthy businessman who served time in prison after falling out with Russian Federation President Vladimir Putin, to US President Barack Obama.

A link to an article on a website called Scitechnation.com appeared in the text of the petition. It had been published on May 29 in English, and detailed the supposed financial scheme, complete with diagrams.

The article was attributed to a Mike Rogers. Links to the article were posted 15 times by Redditor Kevin_Milner, who registered three months ago and since then has posted dozens of links to Obama stories, as well as those about Republican presidential candidate Donald J. Trump.

Two days later, a Russian translation of the Rogers story had appeared on mixednews.ru.

Links to the mixednews.ru translation were posted by pro-Kremlin troll pages on VKontakte (VK), the Russian social media site. Copies of the translation were also posted to actualpolitics.ru and inopressworld.ru, where Mike Rogers was described as a foreign journalist. Links to these were also spread via VK.

Most significantly, on June 1 the information in the Scitechnation.com post was tweeted in Russian by more than 70 Twitter accounts, which collectively have more than 700,000 followers. The OCCRP reporters found these to be part of a wider network of accounts that methodically post Russian propaganda.

For example, 25 accounts that tweeted the allegations of Scitechnation.com in some form on June 1 would two days later accuse opposition leader Alexei Navalny of being a CIA agent. Another 15 of the accounts tweeted in support of Russian politician Sergei Neverov, a Putin insider who is on the US sanctions list, on the same day as they tweeted the Scitechnation claim.

Some of the Twitter accounts also posted jubilant messages when Canadian Foreign Minister Stéphane Dion argued that the Magnitsky Act should not apply in Canada.

The network’s activity mirrors that of the Youth Guard of Putin’s party, United Russia. Documents leaked in December 2014 by the hacktivist group Anonymous International show that “defenders” – as Youth Guard operatives call themselves – are encouraged to post infographics and memes on particular days in order to exploit major events, attack opposition figures, or defend Kremlin politicians.

Three days after the post on Scitechnation.com, Khodorkovsky, who now lives outside of Russia, was directly confronted with the allegations.

On June 1, a Russian journalist for REN TV challenged Khodorkovsky at a press conference via video link.

The businessman and the audience broke into laughter when funding for Obama was mentioned and Khodorkovsky brushed off the question. “Initially this press conference was planned to be held in a circus, this question would have been far more appropriate there,” he said, adding, “Listen, why are we getting distracted by idiots?”

After the exchange, the REN TV site reported that “Mikhail Khodorkovsky did not answer a question from a REN TV journaliston whether he sponsored Barack Obama.” It also said that the Obama funding story was “being spread by Western journalists.”

But OCCRP found that the Khodorkovsky petition did not in fact originate with Rogers.

Online, Rogers seems archetypically American. His Instagram feed is full of pictures of fast food, selfies showing his Walmart name badge on his shirt, and weather reports for his home city of Fort Worth, Texas.

Rogers sells a service in which he posts news releases to his page, boasting that he can attract high web traffic and get any article submitted to him onto the front page of Google search results – for a small fee.

When OCCRP asked Rogers about the article, he said he had not written it himself.

He put his own name on it in error, but somebody else wrote it, he said. He declined to say who, but said the person had an American name.

Reporters also contacted the Reddit user Kevin_Milner. When asked how he first came across the article on Scitechnation.com he replied: “To tell the truth, I do not remember how exactly I did it. I make lots of posts every day. But news about Obama and Russians seemed funny to me.”

Asked why the article was posted so many times, Kevin_Milner admitted he was paid to do so: “I will be honest with you; I've got a task on freelance. I had to make 15 posts with that link.”

Like Rogers, Kevin_Milner refused to name who made the payment. “Sorry, not in my rules… There was a customer, I don't have any personal information, there was a nickname. Who gives your own real info for similar cases? Nobody.”

Meanwhile, information graphics published with the “Mike Rogers” article appear similar to images that appeared alongside Ukhov’s work on Magnitsky by Life.ru. The two infographics use some of the same images, fonts and graphical styles and appear to have been created using the same graphics program. 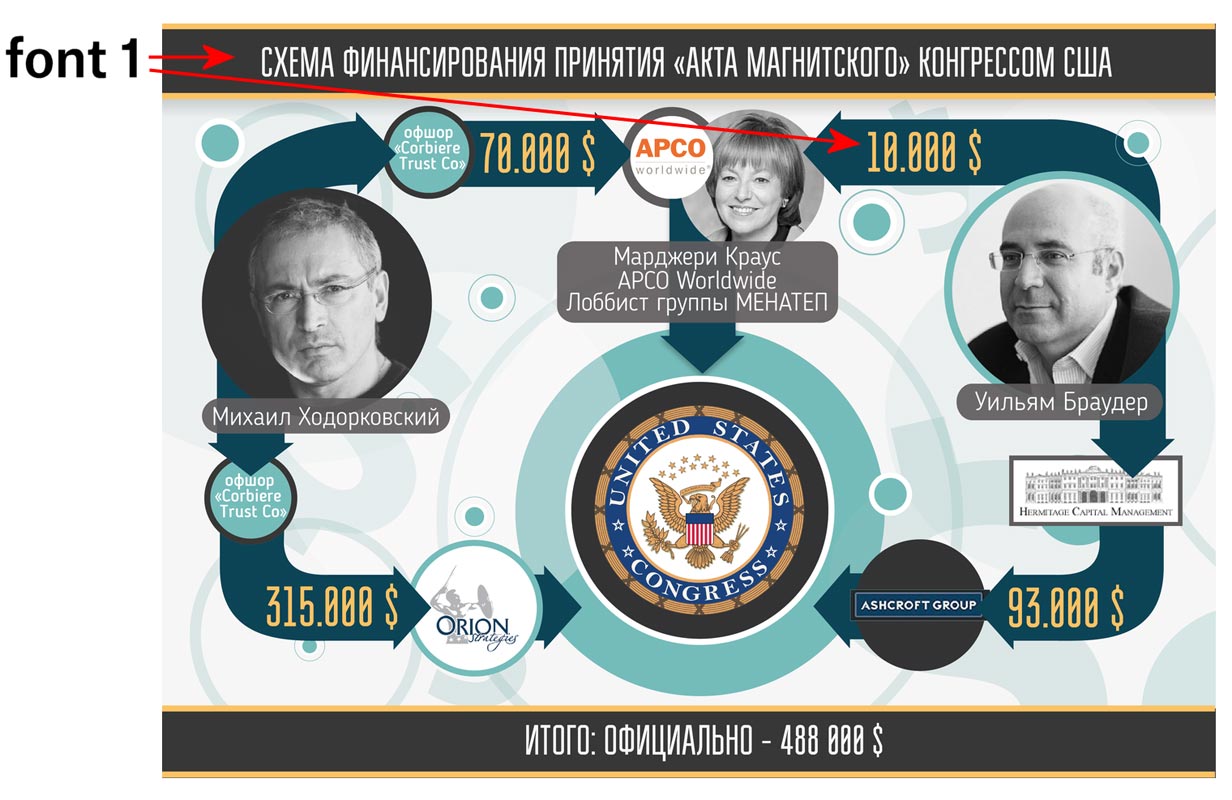 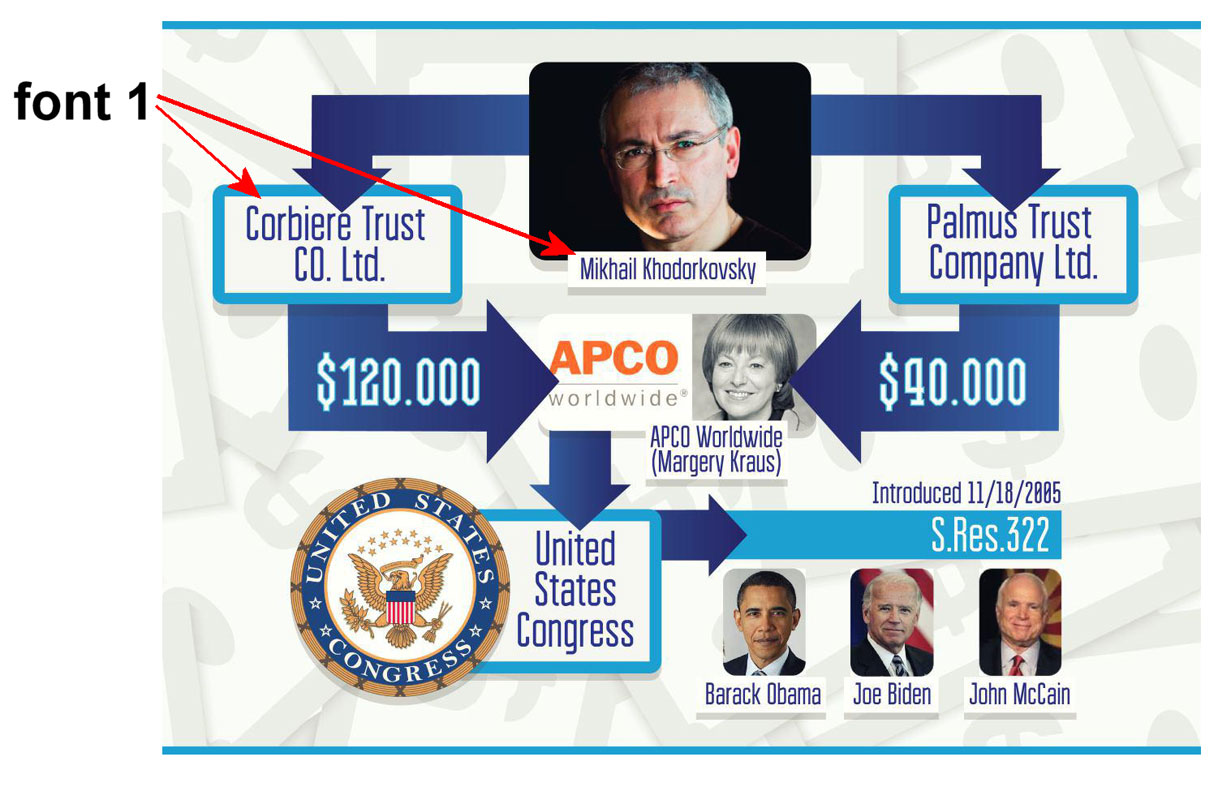 Whoever submitted the article to Rogers, the post was appreciated by Ukhov and other Kremlin supporters.

On June 2, Ukhov rehashed the information published on Scitechnation into a detailed post on his Facebook page, expanding on the claims and adding that Khodorkovsky refused to answer a question from REN TV.

The second petition had also by now attracted attention in the Russian media. The petition garnered almost 90,000 signatures in a short time, but many of them were later deleted by the Whitehouse site team, rolling the list back to just 6,000.

Another major removal of signatures took place in July. More than 70,000 signatures had been collected by July 5, but this number was rolled back to around 29,000 on July 6.

Eventually the petition was removed altogether on July 9. The explanation offered by the White House was that the petition was “removed from the site per our Moderation Policy, because it was in violation of our Terms of Participation.”

But the removal of signatures and the petition provoked ire in the Russian media, which claimed democracy was being undermined to protect Khodorkovsky.

Once again, Uhov chimed in. He tweeted about the White House decision:“It turns out that these people with nice and democratic faces behave like small-time thieves in a back alley.”

On July 12th, a new copy of the Khodorkovsky petition appeared on the White House website. The text of the petition is almost identical to one that was deleted, except the author, D.F. added: “We are outraged by the removal of our petition and demand to consider it in according to the rules!”.

The new petition comes prefaced with a warning from the We The People team: “This petition has received a high rate of spam activity. Signatures deemed to be in violation of the Terms of Participation will be removed."