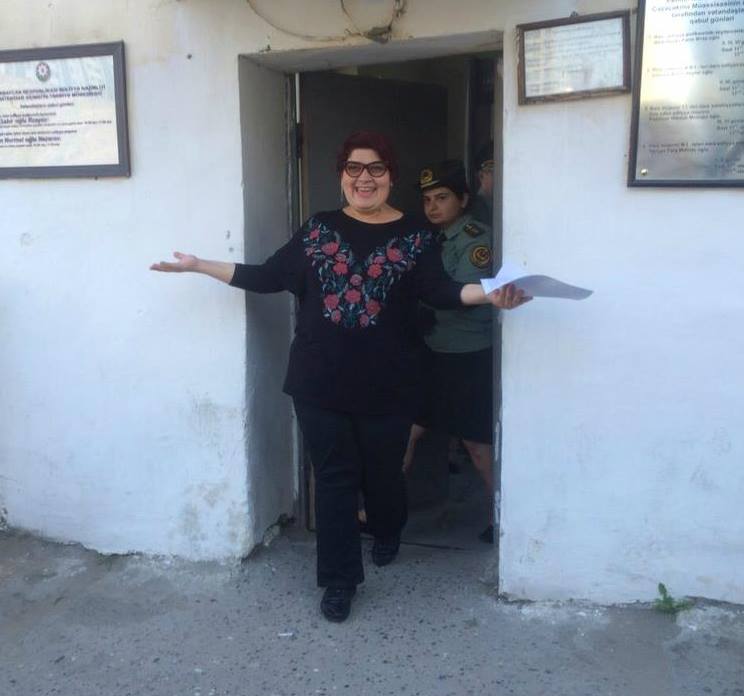 Ismayilova, an award-winning reporter who exposed the corruption of the ruling Aliyev family, has been in prison in Baku since her arrest on Dec. 5, 2014. Many say that her arrest was politically motivated as a consequence of her reporting.

The court ordered Ismayilova’s release and suspended her sentence, acquitting her of the charges of misappropriation and abuse of power, but upholding the charges of illegal entrepreneurship and tax evasion, for which she still faces 3 years and 6 months. That sentence was commuted to probation.

Surrounded by TV cameras, reporters and admirers as she left prison, she remained defiant.

“There was no crime,” Ismayilova told the press upon her release. “President Aliyev and his clique decided to get rid of any criticism against them. It was part of the oppressive action against human rights activists, journalists and NGO leaders.

She was sentenced to 7.5 years in prison last September by the Baku Court of Grave Crimes on charges relating to large-scale misappropriation and embezzlement, illegal entrepreneurship, tax evasion and abuse of power. She has denied the charges against her.

“Khadija's release corrects a grave injustice that she and the people of Azerbaijan have suffered. We feel very happy for Khadija and her family who have been so strong during this ordeal,” Organized Crime and Corruption Reporting Project (OCCRP) editor Drew Sullivan said, “OCCRP will continue to report on the first family of Azerbaijan and any corruption in that country we find. There is much work to do.”

Ismayilova’s colleagues at Radio Free Europe/Radio Liberty celebrated her release. "This is a great day for Khadija, and for independent journalists everywhere,” said Nenad Pejic, RFE/RL editor-in-chief. “We are overjoyed for Khadija, for her family, and for her colleagues, and can't wait for her to get back to work."

Her lawyers filed the appeal after the Baku Court of Appeal upheld her original sentencing on Nov. 25, 2015. Her lawyer Fakhraddin Mehdiyev said Ismayilova asked to be released from prison in the appeal petition. The panel of judges was chaired by Ali Seyfaliyev, Radio Azadliq reported.

Ismayilova previously said she expected further appeals to be rejected by her final recourse, the country’s Supreme Court, according to Amnesty International. However, the court accepted her petition and ruled for her release.

“It’s the most amazing news we could ever hope for!” OCCRP regional editor and investigative reporter Miranda Patrucic exclaimed at the news, “We worked really hard in the past year and half on stories that she would be doing and it helped show the government there’s no real point in keeping her in prison anymore.”

Patrucic has been a reporter, editor and one of the coordinators for OCCRP’s Khadija Project, The Khadija Project was started by colleagues and friends of Ismayilova to continue the work she started. Journalists and volunteers from the US and Europe joined with others in Turkey and the Caucasus to carry on her work after she was jailed.

Emin Milli, managing director at the independent Azerbaijani Meydan TV hailed Ismayilova’s release. "This is a great day for freedom of expression not only in Azerbaijan, but also for the rest of the world,” he said. “Khadija has remained free in spirit during her one and a half years in jail, and during that time she has gained international recognition for her bravery and talent.

“I hope her release means that the Azerbaijani government is beginning to realise the importance of a free and independent civil society."

Ismayilova was named the recipient of the 2016 UNESCO/Guillermo Cano World Press Freedom Prize. In a speech read by her mother at the awards ceremony, Ismayilova said that “humanity suffers when journalists are silenced.” She urged those present to not laud her work or courage, but to “dedicate yourself to the work each one of you can do on behalf of press freedom and justice,” Radio Free Europe/Radio Liberty reported.

She will celebrate her 40th birthday on May 27.