Romanians Take To Streets Against Corruption Thousands marched in Bucharest and several other Romanian cities on Sunday to protest a plan to open the largest open pit gold mine in Europe in Romania.

The demonstrations, which began two weeks ago, have become one of the largest spontaneous social movements of recent years. They reveal mounting opposition to what some Romanians feel is an environmentally precarious project, and a larger problem of political corruption.

Meanwhile Romanian gold miners blockaded themselves in the mine in a five-day protest against plans to stop the project. Proponents also gathered at the mine, arguing that the project would create needed jobs and investment in Rosia Montana, a small town in the impoverished mountains of western Transylvania. 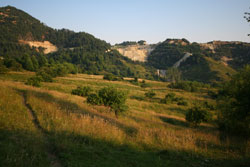 Rosia Montana has been the site of gold mining since Roman times.
But the Romanian government approved a new draft law last month that promised to expedite approval of the mine by giving the project ‘special national interest’ status. The law grants the Romanian portion of the project, Rosia Montana Gold Corporation, permission to move villagers from the site through compulsory purchase orders.

Critics say the project is environmentally reckless, noting the proposed use of cyanide to extract resources from the mine. Others have expressed dismay that the Romanian government will garner only a 25 percent stake in the project plus 6 percent royalties. They say that is too small a percentage and question whether the deal is due to kickbacks.

Rise Project, a member of OCCRP, released confidential documents on its website last week, including the mining contract that the Romanian government refused to reveal to the public. The documents shed light on the secret clauses negotiated between Romanian officials and the mining company.

In Bucharest on Sunday night, chants of “United We Save Rosia Montana,” could be heard amid the thousands of protesters, most of them young. In the front of the demonstration, parents pushing strollers held signs begging the government to protect their children’s future.

As the crowd marched through residential neighborhoods filled with Soviet-style block housing, protesters blew plastic horns and rattled rock-filled plastic bottles to rouse residents to their balconies and windows. Many protesters waved Romanian flags or wore them draped across their bodies.

The protests marked the fifteenth straight day of protests across the country. 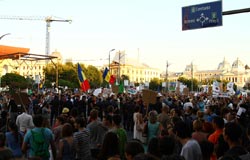 Romanian Prime Minister Victor Ponta voted for the draft law last month, only to later say as a Member of Parliament he would vote against the law. A parliamentary vote on the law has not been scheduled, though Ponta has said he does not believe the law has a chance to pass.

Since Ponta’s pronouncement against the project, Gabriel Resources’ stock has dropped substantially. The company has threatened legal action against the Romanian state for breaching international treaties.

Since its start, the project has been fraught with stoppages and allegations of corruption.  Gabriel Resources was owned by Frank Timis, the controversial Romanian businessman convicted of heroin possession, who is one of the rare persons censored by London’s Alternative Investment Market (AIM).  The market accused Timis of knowingly lying to investors.  The AIM is at times a Wild West-like stock market with more than its fair share of  companies known more for pumping stocks and fleecing investors than actually producing anything.  Timis has said he no longer is involved in Gabriel Resources.