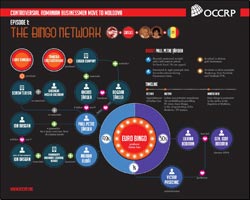 by OCCRP
A convicted Romanian businessman, who twice started a TV game show only to have it go bankrupt before paying out prizes, is teaming with family members of a high-ranking Moldovan general to start a similar program in Moldova, The Organized Crime and Corruption Reporting Project (OCCRP) and Rise Project have learned.

Paul Petre Țârdea, a Romanian businessman, is teaming with the family of Major General Igor Bodorin, head of the Moldovan Protection and Guard State Service to start “Euro Bingo.”

Țârdea orchestrated one of the largest frauds in Romanian history involving the theft of more than €50 million from the Banca Comerciala Română. For his role he was convicted of fraud by prosecutors from the National Anti-corruption Department (DNA) and recently sentenced to eight years and six months imprisonment. He is appealing his sentence.

Before 1989, during Ceausescu’s regime, Țârdea was sentenced to eight-year imprisonment for influence peddling among other crimes.

Four years ago he was also named in another scandal when he tried to buy 100 kilos of gold from Tanzania.

Țârdea was seen travelling last March from Chisinau to Bucharest on Tarom Airlines with Gabriele Bivolaru and Constantin Liviu Niță. All have long histories of problem businesses and have been convicted of fraud or similar crimes. All are examples of Romanian businesses involved in criminal behavior that have started working in Moldova -- its poorer neighbor with aspirations to join the European Union.  OCCRP, the Rise Project and Moldovan journalists are working together to understand what they are doing. 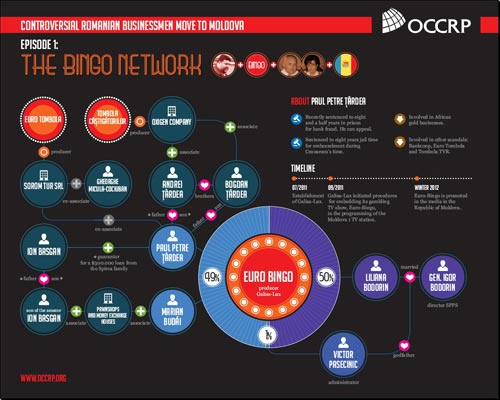 In 2005, Ţârdea operated “Euro Tombola” on Prima TV.  The company that produced the program, Sorom Tur, declared bankruptcy while the show was on air, and as a result, dozens of participants never received their prizes. Sorom Tur was owned by Târdea and Gheorghe Micula-Cociuban, a business partner of Bivolaru’s family.  Bivolaru has been convicted at least seven times for various crimes especially fraud.  Before “Euro Tombola”, Sorom Tur had organized Rokeno, another gambling show that also declared bankruptcy. Following bankruptcy, Igor Bogatii, an unknown Moldovan citizen replaced Țârdea and Micula-Cociuban in the company. Using proxies is a popular tactic of Romanian owners who want to escape debts.

In 2009, Petre Paul Țârdea’s sons, Andrei and Bogdan, started the “Winners’ Tombola,” a TV contest on TVR, the Romanian national public television station. The show was produced by Oxygen Company SRL whose main shareholders are Andrei and Bogdan Țârdea.  Gelu Octavian Uglean, son of Gheorghe Uglean, the former president of the Supreme Justice Court, was a minority shareholder. The show was closed down after two months after several artists told the Bucharest media that the Țârdea brothers had not honored their financial obligations.

In Moldova, “Euro Bingo” was marketed as a project of Galisa-Lux SRL, a company set up in July 2011, in Chisinau as a partnership between Țârdea and the family of General Bodorin. Victor Cătan, a former Moldovan minister of the interior, was part of the company for a few months.

Borodin, a major – general in the ministry was appointed director of Moldova’s secret services or SPPS in 2007 by Vladimir Voronin, the former Communist president of Moldova. Before that, Bodorin was a 15-year veteran of the Ministry of Interior. The SPPS’s main responsibility is to protect Moldovan officials, foreign officials and their family members as well as official institutions and residences.

Six weeks after Galisa-Lux was established, its representatives met with the Observers' Council (CO) of the Teleradio-Moldova National Public Broadcast Institution Their goal was broadcast of their show on Moldova 1, which has a large national audience. Galisa-Lux was represented by Victor Pasecinic, godfather of Igor Bodorin, and Andrei Țârdea, Țârdea’s son.

According to the minutes of the meeting, “the representatives of Galisa-Lux SRL mentioned the intention to produce an entertainment show – Euro Bingo – on TV Moldova 1, to be broadcast in prime time on Sundays. CO members requested details and empowered the president of the company to initiate negotiations and sign the contract with Galisa-Lux SRL for the production of the program."

The Council also mentioned that the contract would come into force when approved by the Observers Council and when Moldova 1 programming schedule has been changed. The proposal was unanimously adopted with five votes.

According to Raisa Lozinschi-Hadei, a member of the Observers Committee, the company “pledged to cover all “Moldova 1” expenses used for the show.”   Moreover, Moldova 1 would get advertising money.

According to the Lozinschi-Hadei, Galisa-Lux, wanted to make profit from ticket sales or “lottery tickets” as they were called.

Galisa-Lux launched a major campaign in Moldovan newspapers promoting Euro Bingo during the winter. The company had no license but was working to obtain one, according to the minutes.

Lozinschi-Hadei claimed that she knew who Țârdea was: “I raised some questions to his son about [one of the previous scandals]. He mumbled something about the alleged profits he brought to TVR. He claimed that there had been a debt of $9,000 but he left them some [other equipment].”

According to company registration records, Galisa-Lux SRL is 50 percent held by Liliana Bodorin, wife of Major – General Bodorin. Another 1 percent is held by Pasecinic giving the family a controlling interest.

The remaining 49 percent is equally shared by Țârdea and a business partner Marian Budăi, who owns pawnshops and foreign currency exchange offices in Romania. One of his businesses was a company with the son of a former Romanian senator, Ion Basgan. Basgan has also partnered with Țârdea. He once guaranteed a €300,000 loan to Țârdea from the Spirea family, known as the asphalt kings of Romania.

Budăi and Țârdea travelled often to Moldova over the last year.. The two also own Job Shipping 2001, a consulting firm registered 11 years ago in Chisinau.

“Half of Interior Ministry worked for me”

Țârdea declined to comment. His son, Andrei, told OCCRP: “I have nothing to say. I won’t answer your questions, and that’s my right. I wouldn’t want to waste your time, so I’ve nothing to say -- either myself, or my father. ”

After numerous attempts to contact him, Țârdea-senior agreed to a phone interview. “It is the media that destroyed me, not the prosecutors, the police or the judges,” he said.

Țârdea said Budăi, a friend for more than 20 years, brought him to Moldova. He said he had invested a lot in Euro Bingo.  “I face the risk to lose all the money because of the license. You’d better write about that” Țârdea said.

General Bodorin told OCCRP “I’ve heard that Mr Țârdea has some problems in Romania, but that’s all I know. We’ve only spoken a few times. My wife does business with whomever she wants.” He said his wife was not available for comment.

“I don’t know much about my wife’s businesses,” he said.

Cătan, a police major-general with the Moldovan Minister of Interior between 1998-2000 and 2009-2011, was initially involved with the Euro Bingo project but soon dropped out.  Cătan was also a deputy Minister of Justice and Interior. Cătan is a member of the ruling party in Moldova, led by Vlad Filat (PLDM). After he retired, Cătan said an old friend recruited him into the company.

Cătan, said the company was arranged like a military organization using a network of ex-policemen to sell tickets. ‘To be honest, working with police officers has certain advantages. They are disciplined and good organizers. Any officer working in a Moldovan district enjoys great authority.”

“Of course, the initiators had in mind protection, influence. They want to make a lot of money,” he said.

Cătan said he dropped out because, while the company promised large amounts of money, none materialized.

Cătan said he checked out Țârdea’s past in Romania. “I asked the Romanian colleagues who informed me promptly. I didn’t want to have anything to do with that company. …. As soon as I received the information about Țârdea, I went to Bodorin’s office and I told him. Well, we are on good terms; his wife is part of the company, so it was only fair to tell him,” he said.

Connections With Bivolaru and Iacubov

There is one other connection to another bingo style show that appeared on Pro TV and also soon declared bankruptcy. Rokeno, a gambling company, was owned Mihaela Ene and Cora Nistor.  Ene is the sister of Bivolaru.

Bivolaru has been investigated and monitored by Romanian authorities for a long time. He is a former PSD deputy, sentenced to three years for economic fraud.

Nistor is the sister of Corneliu Iacubov, a former vice-president of PSD Bacau and the former owner of Rafo Onești Refinery.  He is being sued as an accomplice to tax evasion, money laundering, fraud and embezzlement.

Reported and Written by Paul Radu and Mihai Munteanu