The Paris District Court Thursday acquitted the French television station M6 and Atanas Tchobanov, the editor-in-chief of the website Bivol.bg, of libel and defamation of Ivan Danov, the former Bulgarian Minister of Investment Planning. 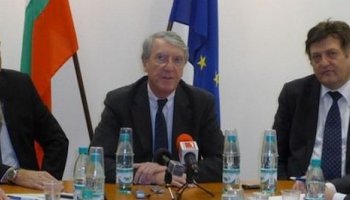 French police from Civipol with Ivan Danov (Provided by Atanas Tchobanov)Danov was investigated by the French court after Bivol, an OCCRP partner, reported that he had received unemployment benefits from the French Employment Agency (Pole Emploi) while he was working as a lecturer at the University of Architecture, Civil Engineering and Geodesy (UACEG) in Sofia, Bulgaria, between 2004 and 2005. The French station filed its own report on the matter.

Danov reportedly worked for nearly a year in France for an architectural firm.

In addition to dismissing Danov’s claims against Bivol, the court also confirmed that Danov fraudulently received € 15,000 (US$17,464) in employment benefits during that period.

Danov was found guilty of failing to notify the French Employment Agency of a change in his employment, which counts as fraud under the Labor Code, as well as for returning to his home country of Bulgaria without notifying the agency.

According to Bivol, Danov publicly stated that he was unaware of continuing payments from the French agency upon his return to Bulgaria.

Despite the court ruling, Tchobanov says that Danov will not have to repay the fraudulently acquired benefits because statutes of limitation for the offense have expired. The French unemployment office has 10 years to seek repayment, while Bulgarian prosecutors must begin a criminal investigation into document fraud within eight years of an incident.

It is unclear why the French Employment Agency in France and the Bulgarian Prosecution office delayed investigating.

This is not the first time Bivol has been attacked by a member of the Bulgarian government.

Delyan Peevski, whose nomination for the chief of secret services in 2013 triggered a violent protest, launched an ongoing smear campaign against Bivol and Tchobanov in 2015 after Bivol published a series of investigations into a Bulgarian tobacco holding deal.

Peevski is a media magnate and his company reported that the French Prosecutor’s Office was investigating Tchobanov for defamation, a claim that was not supported by the Paris District Court. Peevski’s associates also harassed Tchobanov and his family in their Paris home.

“The ruling of the Paris Court is probably the last episode in this saga and it's a moral win for us and for me,” Tchobanov said.

“The smearing campaign against us is going constantly in Peevski's media and will continue. This will not change our way of working and seeking the truth and the facts [and] about wrongdoing.”