For three years, a sleek 21-meter yacht moored in Porto Montenegro, an exclusive marina on the Balkan nation’s Adriatic coast. But documents obtained by OCCRP suggest that the boat was more than just a pleasure cruiser for the rich: It was a vessel for moving money of dubious origin via inflated yacht rental fees.

Between 2010 and 2012, Asti Services Ltd, the Belize-registered company that owned the yacht, paid moorage fees to the Montenegrin marina, which advertises itself as a “yachting paradise.” Over that period, the company reported receiving yacht rental payments of 3.1 million euros (US$4.2 million) from two British Virgin Islands (BVI) companies whose beneficial owner was a key organizer of the infamous Magnitsky tax fraud in Russia.

A separate set of payments Asti made to purchase yacht insurance strongly suggest that the yacht in question is the Crystal Princess, a 21-meter, four-cabin cruiser. The sum Asti reported collecting in rent was considerably more than the amount similar vessels yield in Montenegro, raising questions about the nature of the transactions.

Asti’s yacht income shows up in records leaked from Ukio Bankas, a now-defunct Lithuanian bank that was a key cog in a scheme dubbed the Troika Laundromat. The Laundromat enabled Russian elites to move money out of the country, spend lavishly on luxury goods, and sometimes launder funds, hide assets, or evade taxes. From 2006 through 2013, the system shuffled $4.6 billion through a network of shell companies set up by Troika Dialog, a Russian investment bank.

An additional 1.1 million euros (US$1.5 million) Asti spent to buy a four-story apartment building in the Montenegrin coastal resort of Djenovici is also recorded in the Ukio Bankas leak.

The money for the building came from the illicit proceeds of the Magnitsky affair, according to Bill Browder, an American-born financier who once made large investments in Russia. Browder was spurred to become a vocal opponent of Russian President Vladimir Putin and an anti-corruption activist when his tax lawyer, Sergei Magnitsky, died in prison after exposing the theft.

Taken together, the yacht rental payments and the building purchase show how millions of dollars of dubious — and in some cases definitely criminal — Russian origin found their way into a country seeking to join the European Union.

Montenegro is required to crack down on organized crime and money laundering as a condition of joining the bloc, a process it began in 2012. In March, the EU gave the country until the end of 2019 to do more on tax transparency or face blacklisting.

“This is not the conduct one would expect of an aspiring EU member state,” Browder said in reference to the payments. “Many people seem to be enjoying the blood money and this new information is just one more example.”

A public relations officer at the supreme state prosecutor’s office told OCCRP to contact Stankovic directly. He didn’t respond to a request for comment.

Locals in Djenovici said they didn’t know who owns the Asti Services building, which is just a short distance from the beach. Its apartments are rented out to vacationers who come and go, they said.

Several locals in the former fishing village also said they assume the building is owned by Russians — and they’re right. Documents and business associates of Asti Services indicate that the widow of a deceased Russian lawmaker and former FSB officer is behind the company.

The chain of evidence that connects funds from the Magnitsky affair with yacht rental and a holiday apartment building in Montenegro involves a complex web of corporate and personal relationships among a half dozen people.

It all starts with Dmitry Klyuev, a banker who was convicted of fraud in Russia in 2006 and sanctioned by the United States in 2014 for being the “mastermind” of the massive scheme exposed by Magnitsky to defraud the Russian government of unearned tax refunds.

Among his varied corporate entities, Klyuev was the beneficial owner of Altem Invest Ltd. and Zibar Management Inc., both registered in the BVI. These were the two companies that, from March 2010 to April 2011, paid Asti Services the 3.1 million euro “yacht rent” it reported in income.

The payments were made from bank accounts the Klyuev companies held at FBME Bank in Cyprus, which lost its banking licences in 2015 after U.S. authorities said they had found evidence of money laundering.

There is more evidence that points to connections between those behind Asti and the Magnitsky fraud organizer.

In 2008, the year of its incorporation, Asti Services purchased the Crystal Princess from Terra Trade & Consulting GmbH, a company owned by German national Hendrik Szymanski. Representing Asti Services in the deal was Evgeny Senokosov, who has provided services to Klyuev as well.

FBME banking documents for the two Klyuev companies, Altem Invest and Zibar Management, show that from February to July 2011 they wired $94,040 to Senokosov’s account at the National Bank of Abu Dhabi as payment for travel expenses.

In November 2010, Asti Services bought the apartment building in Djenovici in a deal Senokosov also negotiated. Andrei Gorin, a Russian entrepreneur who sold the building to Asti through his property development company GALS d.o.o., confirmed that Senokosov represented Asti but said there was nothing untoward about the deal.

“All our documents have been checked with local authorities and we have nothing to hide,” Gorin said about the sale of the building in his company’s beachfront community, Village Gals. “All our business is very clean and very honest.”

Official records from Belize, one of the 15 jurisdictions the EU blacklisted in March citing lack of cooperation in tax transparency, don’t show who owns companies such as Asti Services. Its registered agent, CCS Trust Ltd., declined comment.

However, two people who did business with the company told OCCRP that its beneficial owner is Oxana Stalmakhova, the widow of a former member of the Russian Duma.

The two sources, who know Stalmakhova personally, are not named out of concern for their safety.

A tangled trail of corporate ownership and business relationships ties Stalmakhova to the yacht, to Asti Services and to Dmitry Klyuev. It also suggests that she became the company’s beneficiary after the death of her husband, Vladimir Stalmakhov. 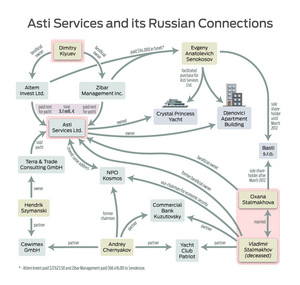 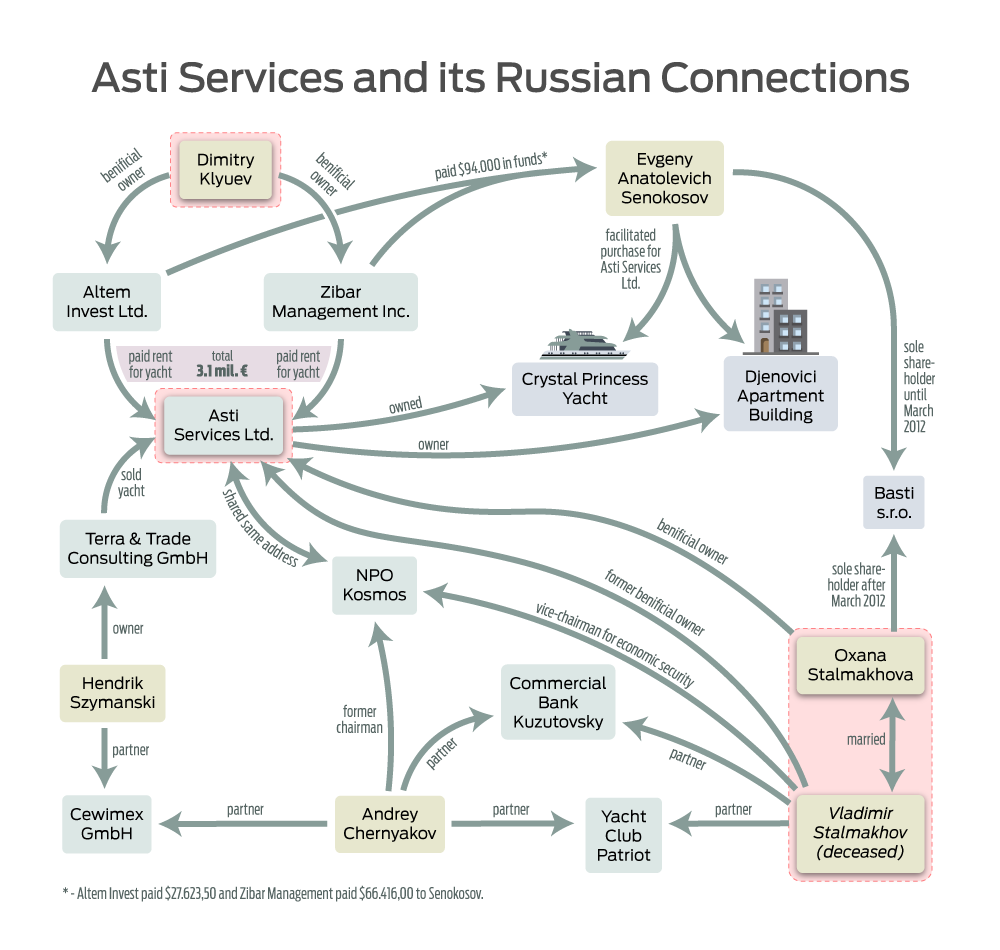 Credit: Edin Pasovic Asti Services and its many connections. Click to enlarge.

To start with, Ukios Bankas records show that, when Asti Services registered the Crystal Princess in the Cook Islands, it did so using the services of the UK-based Blue Ensign Ltd. That company’s invoice for the job offers an important clue to Asti Services’ background, listing its address at Schosse Entuziastov 38, a five-story building in Moscow’s eastern suburbs.

Another notable tenant of the building was NPO Kosmos, once one of Russia’s largest construction companies.

Kosmos liquidated in 2015 after its chairman, Andrey Chernyakov, allegedly misappropriated large sums from a bank loan unrelated to the Troika Laundromat or the fraud discovered by Magnitsky. Chernyakov was arrested in Poland in 2017 but fought extradition to Russia. It’s unclear where he is now.

Beyond the Moscow address, Chernyakov is linked to the owner of Asti Services and to the Crystal Princess through two former business associates. He and Hendrik Szymanski, the German whose company sold the yacht to Asti, were partners in Cewimex GmbH, another liquidated company that dealt in silicon intermediary products and construction equipment.

Chernyakov also had multiple ties to the late Vladimir Stalmakhov, Oxana’s husband. A former FSB officer and majority shareholder in the security company Baikal, Stalmakhov was elected to the Duma in 2003 as a member of Putin’s United Russia party. That same year, Stalmakhov became vice chairman for economic security at Kosmos.

Stalmakhov and Chernyakov were also partners in the Yacht Club Patriot, north of Moscow, as well as in the now-defunct Commercial Bank Kutuzovsky. Another bank partner, board chairman Oleg Novoselsky, disappeared in 2005. His body was found in a barrel at the bottom of the Moscow Canal a decade later. 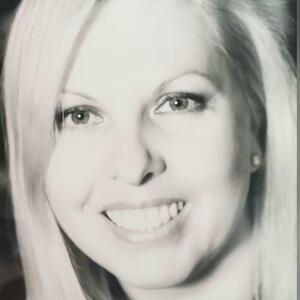 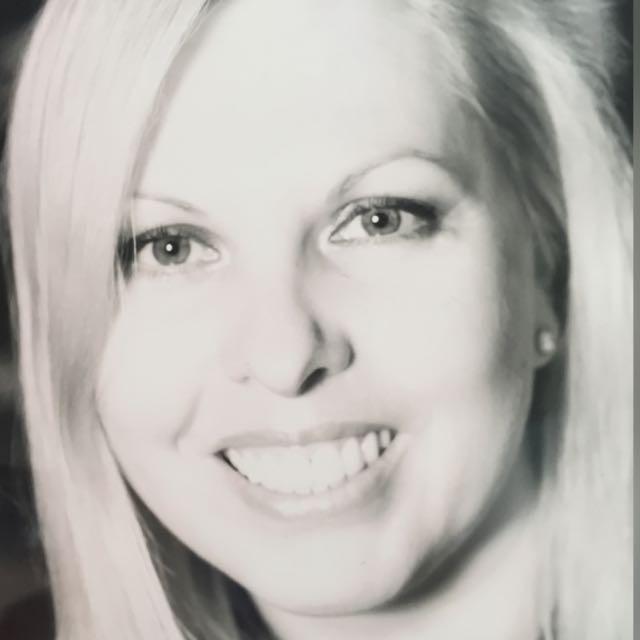 Stalmakhov died in July 2011 of an undisclosed “serious illness” at age 41, according to a Duma announcement. Business records show his widow is no stranger to Asti’s regular representative, Evgeny Senokosov.

Meanwhile, photos posted in July 2014 by a Stalmakhova family member on VKontakte, a Russian social media site, show views of the Bay of Kotor from the Djenovici apartment building.

Stalmakhova didn’t respond to messages asking for comment. Contacted by telephone, she immediately hung up.

Additional reporting by Karina Shedrofsky and Jelter Meers in Sarajevo, and Graham Stack in Berlin.