OCCRP has previously exposed three such schemes: The Proxy Platform, the Russian Laundromat, and the Azerbaijani Laundromat.

Now, OCCRP and its reporting partners reveal a unique new Laundromat, created by a prestigious financial institution. This time, the work shows not only its beneficiaries but also exposes its mastermind and operator — Troika Dialog, once Russia’s largest private investment bank.

The scheme was discovered in a large set of banking transactions and other documents obtained by OCCRP and the Lithuanian news site 15min.lt. The data, which was compiled from multiple sources, represents one of the largest releases of banking information ever, involving some 1.3 million leaked transactions from 238,000 companies.

The main purpose of the system we’ve named the Troika Laundromat was to channel billions of dollars out of Russia. But it was much more than a money laundering system: The Laundromat allowed Russian oligarchs and politicians to secretly acquire shares in state-owned companies, to buy real estate both in Russia and abroad, to purchase luxury yachts, to hire music superstars for private parties, to pay medical bills, and much more.

To protect themselves, the wealthy people behind this system used the identities of poor people as unwitting signatories in the secretive offshore companies that ran the system.

Read on below for the details.

One of the largest-ever leaks of banking records and related documents reveals an $8.8 billion network of offshore companies that allowed corrupt politicians and criminals to secretly launder money, evade taxes, and hide assets abroad.

How the Inner Circle of a Prominent Croatian Businessman Received Russian Money for Fake Real-Estate Deals.

Multiple financial scandals uncovered in recent years have relied on the shadowy world of offshore shell companies to make them work. In case after case, the schemes have one thing in common: The companies were created by a corporate formation agent called IOS Group. 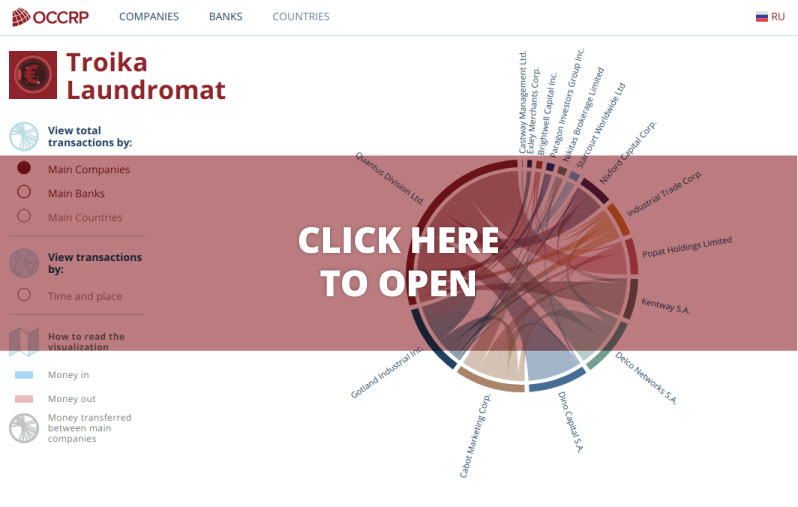 Leaked bank records show transactions between one of Zoran Bećirović’s companies and a firm at the center of a massive money laundering operation.

A law firm Nicos Anastasiades founded — and left just before assuming the presidency — moved millions of dollars among shell companies that were deeply entwined with the secretive global money transfer system.

For American Amusement Park, Russian Money Was the Wildest Ride of All

Russian businessmen used a network of shell companies to buy a South Carolina theme park before leaving it bankrupt.

Montenegro aspires to join the EU. But banking documents from the Troika Laundromat show that the country is a destination for millions of illicit dollars from Russia — and expose how the money was moved.

Celebrities and royals have long flocked to the palm-fringed Spanish village of S’Agaro, about 100 kilometers up the coast from Barcelona. Now it attracts Russian statesmen– and their money.

Perhaps one of the most powerful tales of the Troika Laundromat comes from a dead man: a Viennese lawyer who regretted his involvement in the scheme — and whose body turned up in an Austrian forest.

Among the many items paid through the Troika Laundromat was a lavish party hosted by Ruben Vardanyan — to celebrate the investment bank that created the money laundering system.

A wealthy Russian politician funded his maritime passions through a complex network of offshore companies set up by Troika Dialog.

PARTIES TO THE TRANSACTIONS

In Troika’s Wake, Some Action, Some Waffling

Spain’s anti-corruption body is investigating the purchase of four Costa Brava properties by close allies of Russian president Vladimir Putin, who are believed to have laundered money through the Troika Laundromat.

How a Russian Bank Secretly Moved Millions Around the World

The records of a small Lithuanian bank that was closed by regulators in 2013 are drawing attention to a Russian investment bank, raising questions about the flow of money between the bank, the investment bank, and their clients.

A mysterious shell company based in New Zealand wired half a billion dollars to five Austrian bank accounts held by other opaque entities. The case is part of a criminal complaint that alleges the involvement of Austrian banks in money-laundering activities.

Over 650 Belgian companies that exported goods and provided services to former Soviet countries were paid by shell companies in tax havens. Even former Belgian Red Devils player Emile Mpenza received notable sums through Lithuanian bank Ukio Bankas, which is at the center of the Troika Laundromat investigations.

UkioLeaks: Was the FCIS in the Pocket of Vladimir Romanov?

In 2010, a new director took over Lithuania’s Financial Crime Investigation Service and relieved more than 10 senior officers of their duties. The reason for this, in his words, was a “refined form of bribery” that tainted several.

Russian money – some legitimate, some the proceeds of fraud – was channeled through a Lithuanian bank into the UK, according to a major leak of banking documents. The Guardian’s Juliette Garside has been investigating for months, and on this podcast she describes how Prince Charles and some of England’s most exclusive schools have benefited.

Do You Have What It Takes to Be an Anti-Money-Laundering Professional?

The new "Troika Laundromat" data leak reveals how Swiss banks took millions from dubious sources. Would you have stopped the cash flow? Take the test - with real cases drawn from the leak.

Hundreds of millions of euros coming from a group of companies involved in the Troika Laundromat spilled into ING through an account at its Moscow branch.

For years, the Moscow branch of ING did not stop working for a company the bank already suspected of money laundering in 2009.

Bulgarian Companies, Institutions and Politicians in the “Troika”

About 130 million euros were sent to Bulgarian accounts from more than 150 offshore companies related to the Troika Laundromat, a large-scale system for transfers of money from Russia.

From Putin to Prince Charles – and to Vesterport in Copenhagen. Follow the suspicious money track in a new leak

A leak of 1.3 million bank transactions paints a new and detailed picture of alleged international money laundering. The trail of suspicious cash flows goes from the top of the Russian power company to the British throne, and to a Danish bank branch in Vesterbrogade.

Banking leak reveals how LLPs allowed people to move money under the radar.

Charterhouse one of 50 private education providers to have received funds via Baltic bank.

A leak reveals that the company sold tens of thousands of handsets to a company owned by an illegal arms dealer.

For the first time, leaked data reveals in detail how the Russian elite hid and transferred huge cash flows, including some with criminal origins.

A leak reveals that hundreds of millions of euros of money from suspicious sources ended up in Nordea's accounts.

Nordea bank in Finland received hundreds of millions of euros, some of it from suspicious sources, according to leaked documents.

For years, ABN AMRO, ING, the Dutch branch of GarantiBank and the Russian-led Amsterdam Trade Bank were part of a money laundering operation that took in billions, according to leaked bank transactions.

No Matter How Dirty You Make It, We’ll Clean It Up

Billions in suspicious Russian money was channeled through Lithuania to banks in the Netherlands and other countries.

Brabant Shipyard Built Two Luxury Yachts for Tens of Millions, But Where Did the Money Come From?

Part of the money from the Troika Laundromat ended up in Oss for the purchase of two luxury yachts.

Almost a Billion Euros Flowed From Lithuania to the Netherlands

The two banks that are central to the Troika Laundromat sent hundreds of millions to the Netherlands. The money’s main recipients were Amsterdam Trade Bank and Garantibank.

Through a complex system of anonymous companies in tax havens, Russia’s Troika Bank channeled billions of euros of dubious origin into Europe. Tens of millions of that sum went through the Netherlands via a former subsidiary of ABN AMRO.

A former subsidiary of ABN AMRO was a key link in a Russian laundromat.

Heesen Shipyards, based in Oss, gets another shady client.

Over 650 Belgian companies that exported goods and provided services to former Soviet countries were paid by shell companies in tax havens. The origins of the Russian money – over 131 million euros – are almost untraceable.

Troika Laundromat, the Money Laundering Machine of the Russian Elite

Using two Lithuanian banks, shell companies in tax havens sent billions of euros of Russian money across the world. Part of the suspicious money ended up in Belgium.

Canada: The Globe and Mail

Every year, billions of dollars obtained through corruption spin through the global economy – and Canadian-registered shell companies are a favoured mechanism for making that money clean. The Globe pored through documents obtained by a journalism non-profit to see how it works.

The Wallet of the Russian Elite

How does the Troika Dialog empire work? An OCCRP investigation.

Hetq, in conjunction with its partner OCCRP, has investigated a multi-billion-dollar money laundering scheme involving Russian political and criminal circles who used the fake signatures of seasonal migrant workers from Armenia to divert money from the eyes of state tax authorities.

UkioLeaks: The Links to Vienna

It’s not just about a small Lithuanian bank that got involved in shady businesses--the UkioLeaks reveal relations with Raiffeisen Bank International, which acted as Ukio’s correspondent bank. And a considerable number of Caribbean offshore companies had their own accounts at Raiffeisen.

Erich Rebasso, a Viennese lawyer killed in 2012, was part of a Russian money laundering scheme. As a trustee for Russian clients, he funnelled at least $100 million originating from obscure sources to offshore entities holding bank accounts at Ukio Bankas in Lithuania.

The Prince, the Oligarch, and the Stately Home

In 2007 the Prince of Wales personally intervened in a last-minute bid to stop the sale of Dumfries House, a stately Ayrshire home with a precious collection of Chippendale furniture.

An investment bank led by an oligarch who collaborated with Prince Charles on charity work managed a network of offshore companies moving billions out of Russia.

Ruben Vardanyan, whose bank channelled $4.6 billion to the West, helped fund the restoration of Dumfries House.

A new data leak exposes a system that has pumped money from Russia to the West, allowing politicians, businessmen, and criminals to launder money and hide assets. The profiteers include a good friend of Vladimir Putin.

How the Russian Laundromat Works

For the first time, bank documents show in detail how huge sums of money flowed to Swiss banks, with $37 million landing in the Zurich account of a Putin straw man.

Nordea's Vesterport branch was the center of hundreds of offshore and shell companies for more than a decade, involved in hundreds of millions of suspicious transactions.

An exclusive investigation reveals how Troika Dialog channelled $4.6 billion to Europe and the US.

More than 6 billion euros was spun through a massive network of companies and accounts that facilitated the laundering of money tainted with fraud, corruption, and even blood. That network operated through Ukio Bank.

A video laying out how the Troika Laundromat operated.

Tens of millions to one of Vladimir Putin's closest friends. A mansion in Spain built from money borrowed from a pensioner from Moscow. Luxury yachts from an elite shipyard. These are just a few of the stories from the Ukio Bank leaks.