Cypriot police raided on Friday the premises of FBME Bank in Nicosia and in Limassol, looking for evidence of money laundering, two sources told OCCRP. 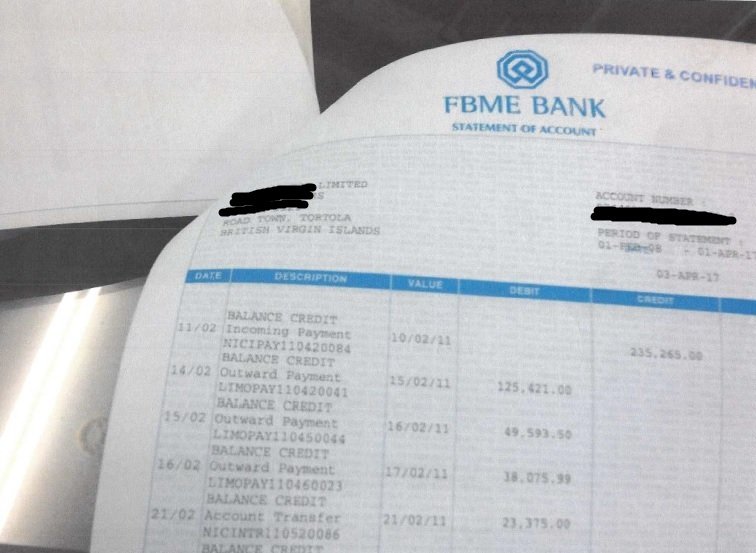 FBME bank statement (Photo obtained by OCCRP)“Evidence was taken and will be evaluated,” an official who requested anonymity said.

A second source familiar with the matter said that the police had made no arrests. “We questioned the employees who were inside,” the source said and added that officers had made “copies of the servers” and searched for documents.

The investigation concerns “many cases” of legalization of illegal proceeds from various activities, including drug smuggling, as well as terrorism financing, he explained, adding that the bank’s owners had not been questioned yet.

The raided bank’s headquarters is in Tanzania and has two service points in Cyprus.

In July 2014, the US Treasury’s Financial Crime Enforcement Network (FinCEN) described FBME Bank as a “financial institution of primary money laundering concern” and banned US banks from dealing with it.

Immediately after the US ban, the Central Bank of Cyprus (CBC), which supervises the island’s banking system, installed a new management and reduced the bank’s operations.

In December 2015, the CBC fined FMBE Bank €1.2 million (US$1.3 million) for gaps in the implementation of the anti-money laundering legislationand revoked the license of its branch which performed 90 per cent of its business. In May 2017, the Bank of Tanzania also revoked the bank’s license.

The owners of the bank denied any wrongdoing and resorted to arbitration but the judges of the Paris-based arbitration court of the International Chamber of Commerce dismissed their requests.

Since July 2014, the bank’s operations have been restricted  and in 2016, it considerably reduced its staff.

Attorney-general Costas Clerides and a spokesperson of the Central Bank of Cyprus declined to comment Friday’s raid. The owners of the bank, contacted via their London-based PR company, did not immediately respond to a request for comment.

Chrystalla Georghadji, the former governor of the CBC said two years ago that the supervisory authority’s action had preserved the island’s ailing banking system’s ability to transact in US dollars.

In 2013, Cyprus agreed as part of a bailout agreement to do more against money laundering. According to press reports, pressure from the US led to the introduction of stricter anti-money laundering rules last year.