Two decades ago, at a meeting with top business leaders in his oil-rich Central Asian country, Kazakhstan’s President Nursultan Nazarbayev is famously known to have lost his temper.

“I have created opportunities for you,” he said. “And you don’t pay taxes. You take your earnings abroad or buy real estate and luxuries.”

“I could take any of you to court by the hand!”

It was a pointed threat in a country with a politically compromised judicial system that’s often little more than a tool in the hands of those in power.

Nazarbayev would go on to rule Kazakhstan for another 18 years before stepping down in 2019 — though not before anointing himself “Leader of the Nation.” The system he built and oversaw, which revolves around patronage, favor-trading, and competition over political and economic resources — is still in place. Some Kazakhs have amassed huge riches, but those seen as unloyal have been ruthlessly crushed.

So it may come as little surprise that, during his rule, the regime’s surveillance appears to have been deployed against top Kazakh oligarchs. At least four major players, including a close friend to Nazarbayev, are on the list.

Their phone numbers were among 92 identified on a leaked list of nearly 2,000 numbers linked to Kazakhstan believed to have been selected for targeting with Pegasus, a sophisticated spyware tool developed by Israeli surveillance company NSO Group. The operator of the software appears to be the government of Kazakhstan.

The 2,000 numbers were among a list of 50,000 leaked to Forbidden Stories, a French journalism non-profit, which coordinated an international collaborative investigation called The Pegasus Project. Read about the wide range of evidence, including forensic analyses of dozens of phones, that led reporters to conclude the list represents targeting by NSO Group’s Pegasus software.
Read more

Among the most prominent names selected for targeting is Bulat Utemuratov, once the richest man in Kazakhstan and a close friend and adviser to Nazarbayev. His number appeared in the data — along with his wife, two sons, and several employees. The list also included Alibek Kulibayev, the nephew of Nazarbayev’s son-in-law Timur Kulibayev, and two of his personal assistants.

The arm of the regime appears to have stretched far beyond its borders. Among those selected was Mukhtar Ablyazov, the fugitive former head of BTA Bank, who the government has accused of stealing billions from its coffers. The well-known regime opponent has been living in France for nine years.

Without forensic analysis, it is impossible to tell whether these devices were indeed successfully breached.

But the oligarchs selected for targeting “are the most powerful people in Kazakhstan,” said Nate Schenkkan, Director of Research Strategy at U.S.-based human rights group Freedom House. “So it doesn’t surprise me that the security services are trying to monitor them and surveil them. … That’s where the most powerful political threats have always come from.”

Earlier, OCCRP revealed that some of Kazakhstan’s most senior officials were also on the list. Among them is former prime minister Bakytzhan Sagintayev, current president Kassym Jomart-Tokayev, and prime minister Askar Mamin.

But the list also contains phone numbers belonging to a number of other senior officials, including a regional governor, former and current ministers, and heads of state companies.

The dozens of numbers suggest that the entire Nazarbayev regime, practically from top to bottom, was being spied on — most likely by its own security services.

The available data points to a particular focus on the inner circle of Nazarbayev, who also named himself Chairman of the Security Council for life. The Kazakh Security Council controls the country’s security services. Before stepping down, Nazarbayev changed the constitution to give the security council additional powers that place it even above the president and prime minister.

The Kazakh security services didn’t respond to reporters’ requests for comment. Dauren Abayev, first deputy of the Kazakh presidential administration, told state television channel Khabar that he couldn’t comment on the allegations that there was a list of people selected for targeting with spyware, because he knew nothing about it.

“We got some intriguing information without any evidence,” he said of the revelations of The Pegasus Project.

“It is easy to include anyone on this list and, through that, sow the seeds of doubt among the elite, among journalists, et cetera. I believe it’s better to stay smartly skeptical.”

Read more of NSO Group’s responses to The Pegasus Project.

NSO Group has consistently said that its software is sold only to governments, and only for the purpose of targeting criminals. It has refused to confirm or deny whether Kazakh government was a client, and has claimed not to have any access to its customers’ records except in cases of abuse.

For over a decade, Mukhtar Ablyazov has been a nemesis of Kazakhstan’s government. The 58-year-old businessman has previously been targeted for surveillance, with his wife and daughter allegedly tracked in Italy and then, as he describes it, kidnapped by Kazakh authorities.

Once a senior government official, Ablyazov served as minister for energy, industry and trade in the 1990s. He first appears to have angered President Nazarbayev in 2001 after co-founding an opposition movement that was later banned as “extremist.” Shortly afterwards he was jailed on corruption charges, then pardoned and released. 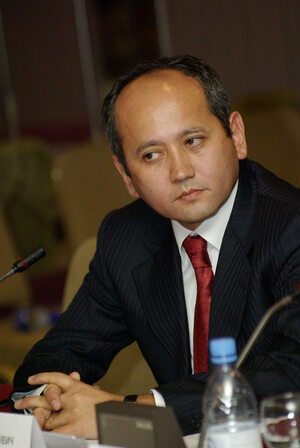 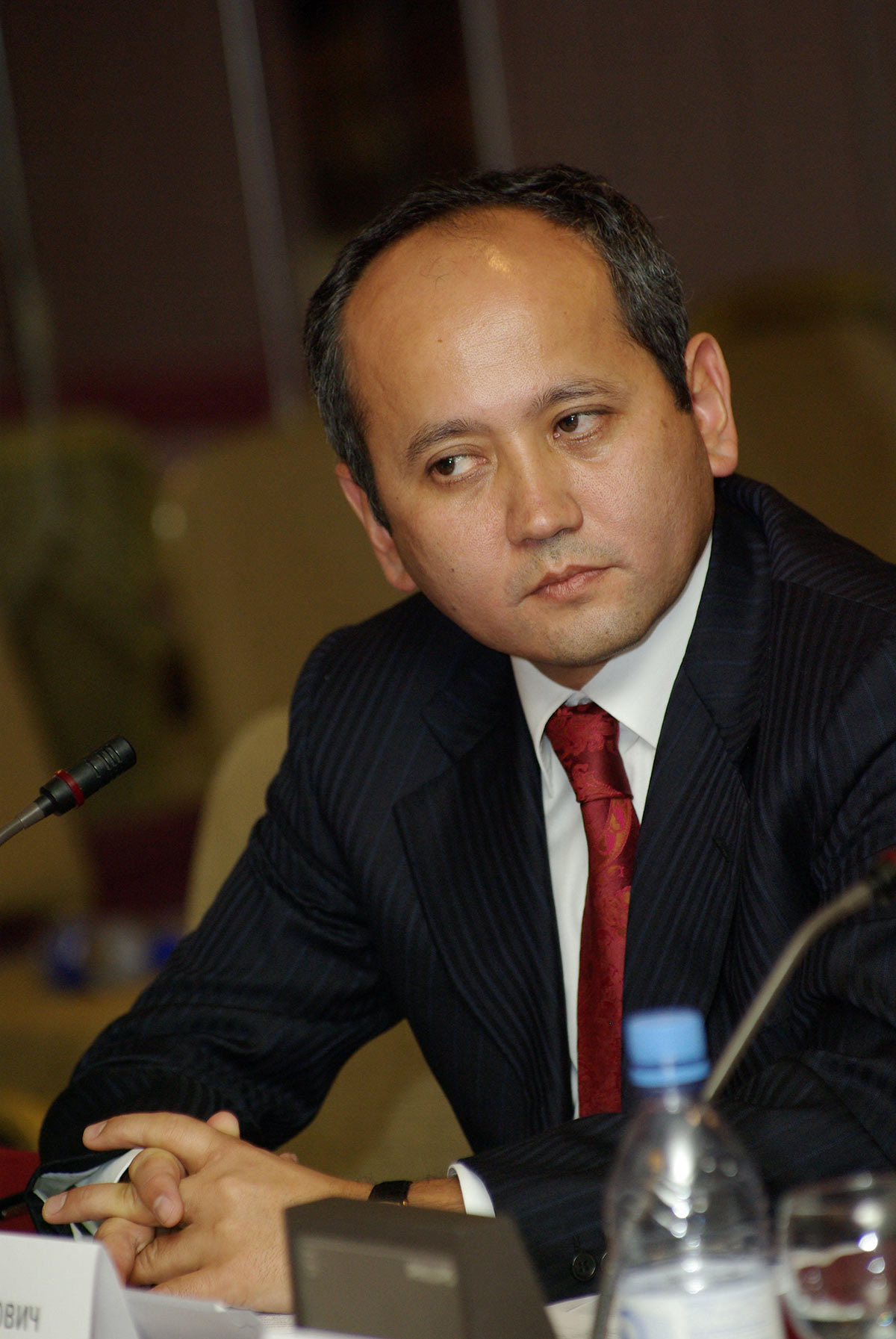 But by 2009 he was in trouble again, fleeing Kazakhstan for London as the state accused him of stealing more than $10 billion from his own financial institution, BTA Bank. Ablyazov has described the charges — for which he was sentenced to life in prison in Kazakhstan and a 15-year term in Russia — as political. He was arrested in France in 2013 on the basis of an Interpol “red notice,” but released after a court ruled that the extradition request was politically motivated.

Two of Ablyazov’s French phone numbers appeared on the leaked Pegasus list in late 2018, though reporters were unable to conduct a forensic analysis to confirm that the phones were breached.

Ablyazov told Le Monde, a partner in the Pegasus Project, that he hoped the new information about his possible targeting with Pegasus would prompt French prosecutors to open an investigation.

“The Kazakh regime has been trying to silence me for the past twenty years to stop me from denouncing the kleptocracy that is eroding the country,” he said, adding that he expected the revelations of potential widespread surveillance to make waves among Kazakhstan’s ruling elite.

“I imagine that those high ranking Kazakh officials will be upset by your revelations and this will probably revive fratricidal struggle within the Nazarbaev clan,” Ablyazov said.

The list also included Bulat Utemuratov, one of Kazakhstan’s wealthiest people. Two of his phone numbers were selected between 2017 and 2019. In addition to the oligarch himself, his sons, wife, a close relative, his personal assistants, and his employees also appear to have been selected for targeting.

In addition to his interests in banking, real estate, hospitality, and natural resources, Utemuratov once served as the head of the office of the president under Nazarbayev. He was known as Kazakhstan’s “gray cardinal” and described by a U.S. diplomat as the president’s “personal financial manager,” according to a leaked diplomatic cable published by Wikileaks. 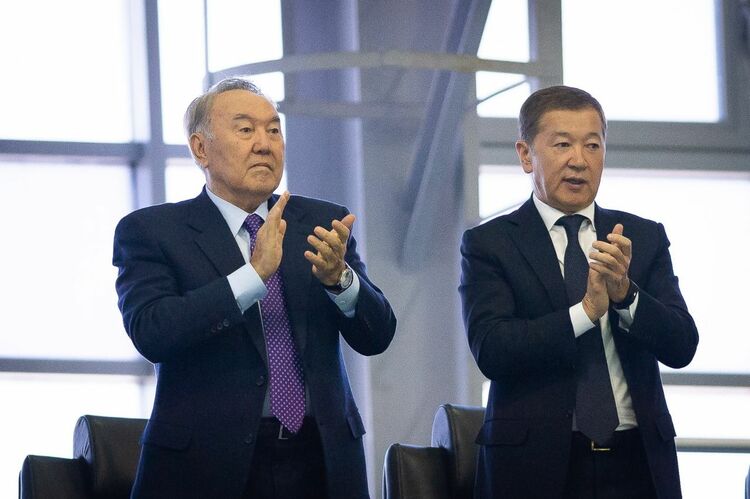 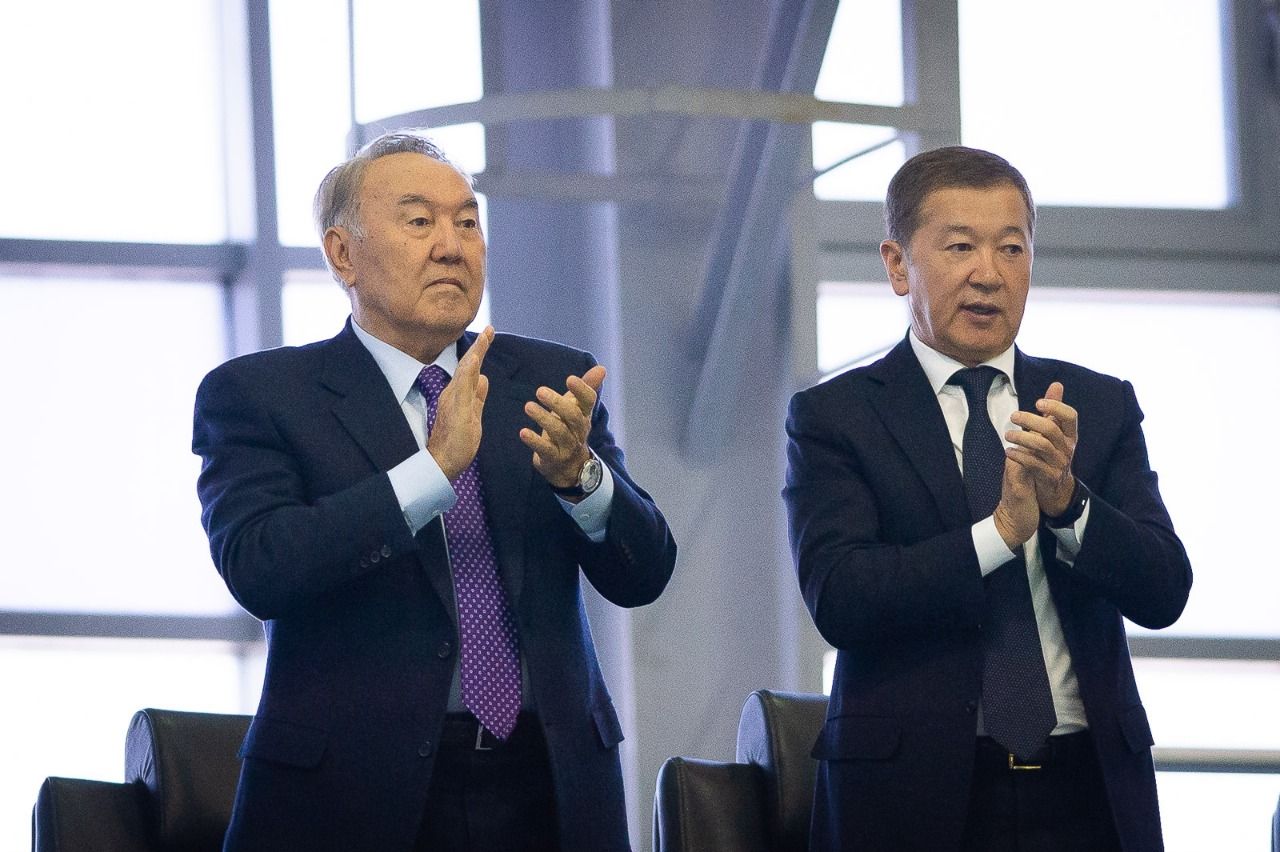 Credit: Press Service of the President Nursultan Nazarbayev and Bulat Utemuratov at a tennis match in February 2019.

In 2015, Forbes described Utemuratov as the richest man in Kazakhstan, with a fortune of $2.6 billion that he built, in part, through acquiring privatized state firms and reselling them to Western corporations.

No specific reason for any surveillance of Utemuratov is known. But the businessman was entangled in the same BTA Bank case that resulted in Ablyazov’s flight from Kazakhstan.

After being seized by the state, the bank sued both businessmen, accusing Utemuratov of helping Ablyazov hide the stolen money.

🔗All Eyes on BTA Bank

Another Kazakh billionaire connected to the Ablyazov affair was also on the Pegasus list.

Kenes Rakishev, the son-in-law of a former prime minister, acquired a stake in BTA Bank from the government after it had been seized from Ablyazov.

Over the next few years, Rakishev grew his share of BTA into a controlling stake and transformed the institution, shedding its banking business. In effect, he turned BTA into an investment company whose main assets were its claims against Ablyazov, estimated at $6 billion.

A considerable portion of the Ablyazov property that BTA was claiming is located in Russia, including plots of land, development projects, and a port. As previously reported by OCCRP and Russian news site The Project, when Rakishev went after it, he entered a fierce battle that involved people close to Ramzan Kadyrov, the strongman leader of Chechnya.

Straddling the worlds of politics and business, Timur Kulibayev is one of the richest and most powerful men in Kazakhstan. He’s also literally family to Nazarbaev, having married his daughter Dinara.

Though Kulibayev’s number doesn’t appear to have been selected, three people in his inner circle — his nephew and two assistants — were on the list of potential Pegasus targets. 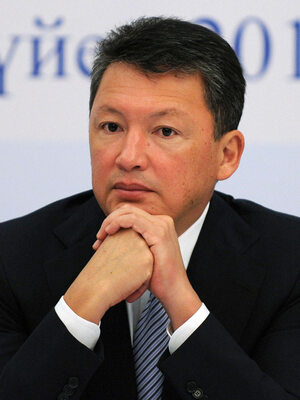 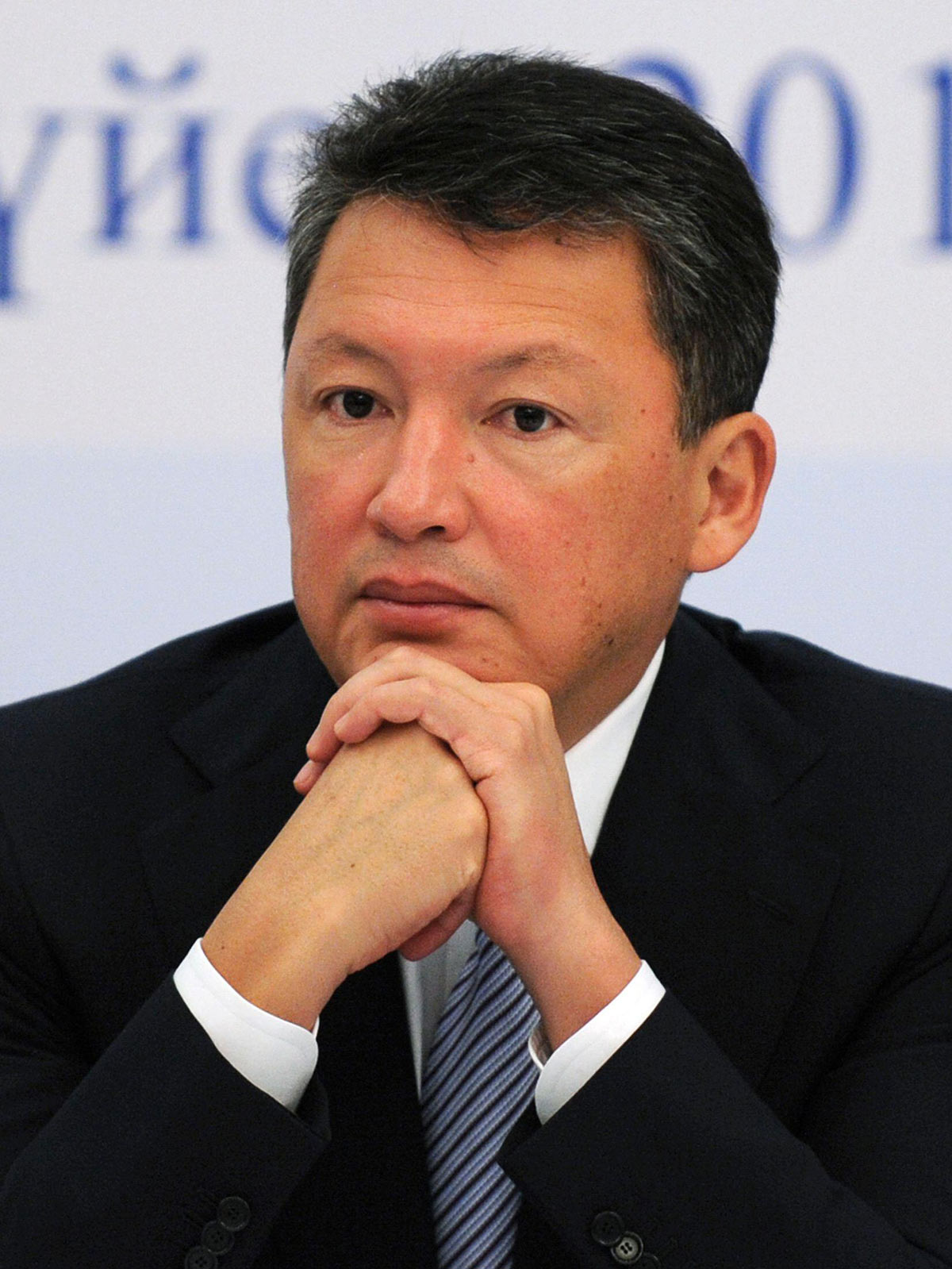 “He’s come in and out of favor over the years,” said Schenkkan from Freedom House about the possible reasons for interest in Kulibayev. “There was a perception that you have to keep him in line and make sure he doesn’t go freelancing anywhere.”

In 2011, when he was forced to step down amid a series of controversies, Kulibayev headed a number of state entities that controlled the country’s vast oil, gas, and mineral resources.

Today, he and his wife are comfortably among the richest people in the country, with a net wealth of $2.9 billion each, according to Forbes’ 2021 ranking. They control a vast business empire that includes interests in banking, agriculture, oil trading, and real estate.

Kulibayev’s wealth extends far beyond Kazakhstan. He was investigated in 2010 for money laundering in Switzerland, following evidence given in London’s High Court that he had used “laundered money” to buy a house from Britain’s Prince Andrew. Swiss prosecutors dropped the case in 2013.

Unlike in many other countries for which data was available, reporters identified relatively few journalists or human rights activists selected for targeting from Kazakhstan. Instead, the Kazakh list was full of current and former senior officials, businessmen, and even members of the special services. The vast majority of those selected are known for their loyalty to the government. Their inclusion may be a way to ensure that loyalty.

Explore other Kazakh names selected for targeting in our interactive infographic.

Politically Active Mexican Teachers May Have Been Targeted for Digital Surveillance
Grieving Parents of Murdered Mexican Students on List of Suspected Targets of Military-Grade Israeli Spyware
World Leaders on Pegasus List Include France’s President Macron, Morocco’s King Mohammed, Kazakhstan’s President
Where NSO Group Came From — And Why It’s Just the Tip of the Iceberg