In December 2011, just a few days before the new year, Azerbaijani President Ilham Aliyev attended the inauguration of a 40 million manat (US$50.9 million) construction material plant outside of the country’s capital, Baku.

Among the people greeting Aliyev at the entrance was Ashraf Kamilov, an investor in the plant and the owner of Synergy Group, a well-known conglomerate that includes hotels, agriculture, and internet technology companies in its portfolio.

Kamilov, who is known to be a close business partner of the president’s family, had much to be thankful for. 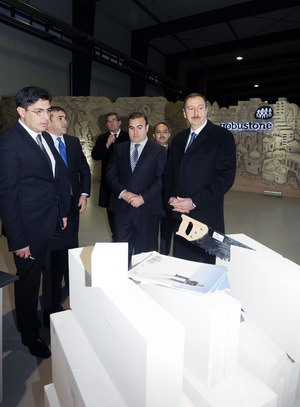 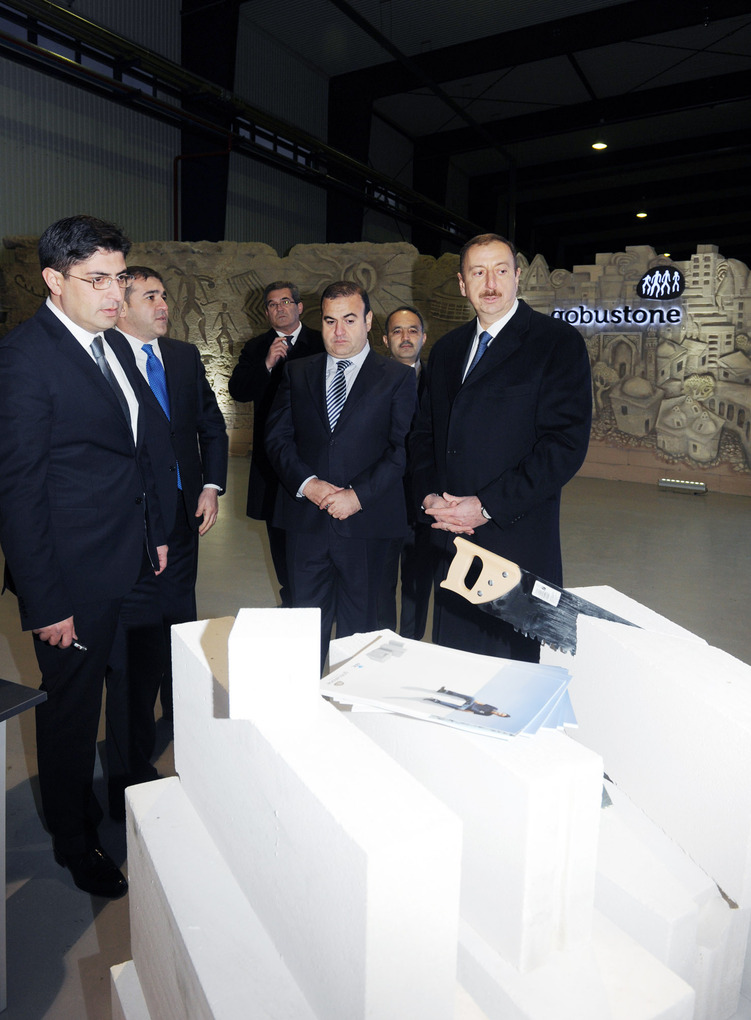 Credit: president.az Kamilov, center, and president Aliyev, right, join other attendees at the opening of the new construction materials plant.

After all — as a prominent sign reminded the viewers — his new plant was built in part thanks to a 10-million-manat ($12.8 million) loan from the state. After its completion, the aerated concrete blocks it produced were used in the construction of a number of prominent state projects.

But Kamilov wasn’t alone. The plant had a secretive co-owner that also benefited from its success, a company based in the British Virgin Islands.

As it turns out, the offshore company is owned by President Aliyev’s youngest daughter, Arzu, who became its beneficial owner at the age of 19. Though the offshore structure was meant to keep her ownership a secret, it was revealed thanks to documents obtained by the International Consortium of Investigative Journalists and shared with OCCRP as part of the Pandora Papers project.

Kamilov, Arzu Aliyeva, and the economic ministry did not respond to requests for comment. 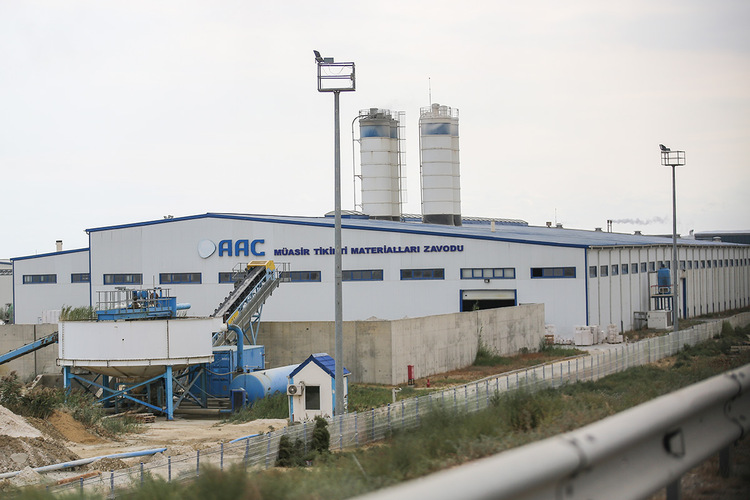 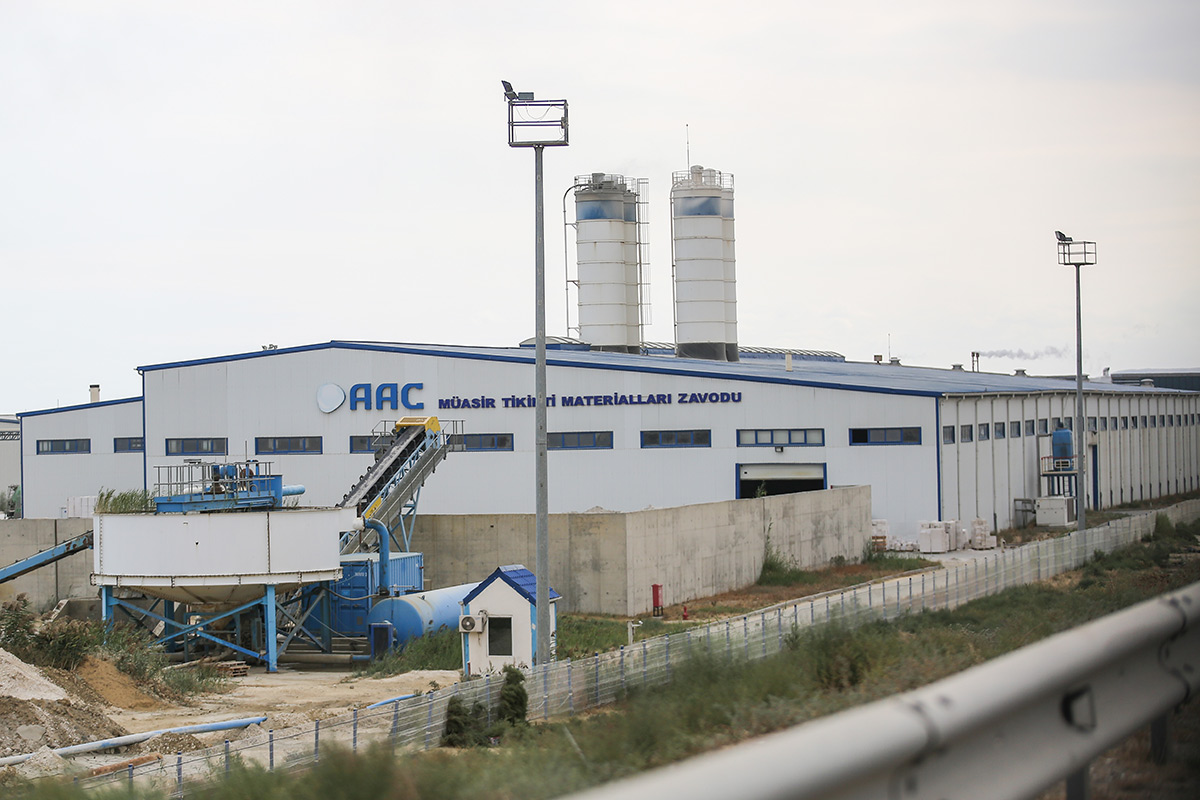 Company records in Azerbaijan are not open to the public, and reporters could only obtain partial ownership information through Tax Ministry data that was available online until 2012. But it does provide several glimpses of who was behind the plant.

When it was founded, AAC, the company that built the plant, had three owners:

The exact stakes each of them held are unknown, and the timing of subsequent changes are also unknown. But an annual report by Kamilov’s Synergy Group shows that, by 2012, it held a 39 percent stake in AAC.

Ergokon was just one of dozens of offshore companies owned by the Aliyev children and the family’s associates. Leaked documents show they hid a vast real estate empire.
Read more

In November 2017, Aliyeva’s offshore company, Ergokon, filed a form to its offshore service provider stating that it was dormant and held no assets, suggesting it no longer held a stake in the plant.

But it still belongs to the family. According to the company’s LinkedIn page, it is now part of PMD Group, a property development company that reportedly belongs to the Aliyevs.

Because AAC does not publish its financial statements, it is unknown how much the plant may have earned Arzu Aliyeva or its other owners.

But it appears to have done a brisk business. A year after its inauguration, its director at the time, Teymur Abduragimov told a state outlet that its products had already aroused great interest among customers.

Several “major construction companies” have started to use them, he said.

In a 2014 interview with the business publication The Business Year, the chairman of Synergy Group’s Supervisory board at the time, Riyad Huseynov, described AAC as “the main player for almost all megaprojects in our country” and said its production capacity would double that year.

The company’s products were used in the construction of major state projects including the State Oil Fund building, the Heydar Aliyev Center, the SOCAR Tower, the Azerbaijan Diplomatic Academy, and the National Gymnastic Arena, which hosts the gymnastic federation headed by the president’s wife.

It also supplied private projects that belong to the Aliyev family, such as 28 Shopping Mall and a Bravo hypermarket.

On February 21, 2015, the Central Bank of Azerbaijan carried out a massive devaluation of the currency, which lost a third of its value against the U.S. dollar. This economic shock robbed citizens of much of their purchasing power, demolished their life savings, and ruined at least four major banks.

But just two days earlier, AAC was able to restructure a loan it received the previous year from AtaBank, a lender that was owned by Kamilov and the Aliyevs.

The restructuring was unusual: The company repaid 60 million in manat ($76.5 million), and immediately re-borrowed a slightly higher amount in U.S. dollars.

As a result, while everyone else lost out, the company massively reduced its exposure to the manat at just the right time, winning about 20 million manat ($19.3 million) as a result.