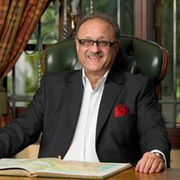 A businessman on trial for a huge Kenyan government procurement scandal had a Credit Suisse account that appears to have remained active even after official investigations were launched.
Who else is in the Suisse Secrets data? >

As Kenya reeled after a high-level official blew the whistle on a sprawling corruption case at the heart of government, a businessman allegedly central to the scandal was stashing millions of dollars in his secret Swiss account.

Deepak Kamani opened a Credit Suisse account in 2000, according to leaked records from Suisse Secrets, an investigation coordinated by OCCRP and based on a huge trove of banking data leaked to Süddeutsche Zeitung.

Kamani, identified as an architect of the embezzlement scheme, held the account jointly with his brother, Rashmi, and other family members. It recorded its highest balance of 5.16 million Swiss francs ($4.1 million) in September 2006, months after Kenyan authorities had declared the brothers wanted.

Deepak and Rashmi Kamani have been on trial in Kenya since 2015 for their role in the scandal. Their father was also charged over the case, but died during the course of trial proceedings.

John Githongo, Kenya’s former “anti-corruption czar,” exposed the procurement scandal — known as the Anglo Leasing affair — after he secretly recorded his government colleagues while investigating how $234 million in public funds had been paid out, some of it to phantom companies, for inflated contracts.

In one case, the Kenyan government had contracted an unknown U.K. shell company called Anglo Leasing and Finance Ltd. to supply a passport printing system for five times the cost of a competing bid from a French firm. Anglo Leasing’s proposal was to subcontract the actual work to the French firm.

A total of 18 procurement contracts worth $751 million, plus interest, were awarded without any competitive bidding. A number of high-level government officials, spanning two administrations, were implicated in the scheme.

Credit Suisse may now be added to that list.

The Swiss foreign ministry did not respond to questions on whether the three Kenyans under investigation in Switzerland were the Kamanis. Swiss authorities have never named Credit Suisse among the banks involved in the Anglo Leasing scandal, and the foreign ministry declined to say if investigators were aware of the Kamanis’ account there.

The accounts in this story are denominated in Swiss francs. Since the value of the franc has fluctuated over time, we have converted the account holdings to their historic U.S. dollar equivalents.

What is clear from the leaked banking data though, is that the Kamanis were able to move most of their money out of their Credit Suisse account sometime after September 2006 when the Anglo Leasing affair had already blown up. The data shows that the account remained active a decade later, but the balance had fallen to just under 115,000 Swiss francs ($118,000).

The foreign ministry said Switzerland’s criminal case is on hold, and the funds will remain frozen, until there is a verdict in the Kenyan trial, which has now stretched into its seventh year.

“The outcome of the Kenyan proceedings, which relate to the predicate offense [of] money laundering, will indeed have a decisive influence on the Swiss national proceedings in connection with the money laundering acts of which the defendants are suspected in Switzerland,” the ministry said in an email.

In an emailed response, Credit Suisse declined to answer specific questions, saying it was aware of its responsibility to adhere to the “highest standards” and that it operates in compliance with all laws and regulations at home and abroad.

“In recent years the bank has taken a series of significant measures in line with Swiss financial reforms, including considerable investment specifically in compliance and combating financial crime,” Credit Suisse said.

The Kamanis did not respond to questions sent to their lawyer.

The leaked data shows that another figure associated with the Anglo Leasing affair also had Credit Suisse accounts around the time of the scandal and its aftermath:

Alfred Getonga was an aide to President Mwai Kibaki, who was in power during the period when six of the Anglo Leasing scandal contracts, worth $322.6 million, were signed. Getonga was named by Githongo as a chief co-conspirator in the scheme, and was described in similar terms by U.S. officials.

In a 2006 classified cable, the U.S. ambassador in Nairobi confirmed Githongo’s findings on Getonga, and sought to revoke his U.S. visa, citing “the serious and far-reaching nature” of corrupt activities.

“As Personal Assistant to the President, Alfred Getonga used his position in the Office of the President (OP) to push forward fraudulent contracts in the OP and in other ministries, and then divert a large portion of these government resources for political campaign fundraising, and for personal gain,” the leaked U.S. Embassy cable stated.

Getonga, who has not been charged in connection with the case, confirmed via text message that he has had foreign bank accounts, but refused to answer questions about the source of the 710,956 Swiss francs ($540,000) in his Credit Suisse account in December 2005.