In mid February 2019, raw from torture, weary from sleep deprivation, and more alone than he’d ever been, Sharofiddin Gadoev waited in the dank basement of a government office in Dushanbe, the capital of his native Tajikistan. Just two weeks earlier he’d thought himself safe, well away from the dangerous politics of his homeland, living in the Netherlands and visiting Moscow.

He wasn’t. Russian operatives had scooped him up and rushed him back into the clutches of the regime he’d become known for opposing.

He now says he was betrayed by Nikolai Nikolaev, a Russian lawyer he thought was a friend and ally of the Tajik opposition. A new OCCRP investigation tells the story of Nikolaev and the Tajik opposition leaders who were kidnapped — or worse — after establishing relationships with him.

But this is Gadoev’s story. It is one only he can tell: Though he’s not the first Tajikistani dissident to be kidnapped in a foreign city and forcibly brought home, he is the first to get out alive. This makes him uniquely positioned to tell the world what it’s like to be forcibly repatriated to Tajikistan — and what happens afterwards. (Most specific elements of Gadoev’s story could not be independently verified, though the broader outlines of his disappearance in Moscow and reappearance in Tajikistan have been confirmed.)

Birth of an Opposition Leader

Gadoev was once a successful businessman who ran a transportation company in Dushanbe. His life was comfortable, but he was frustrated by Tajikistan’s stifling authoritarianism and became involved in opposition politics. This might be why Tajik security forces seized his business in 2012, hounding him from the country with what he describes as false charges of forgery and smuggling.

Gadoev eventually received asylum in the Netherlands. His long journey there was harrowing, and it was only after living in safety for several years that he began to express himself more boldly — and politically. “I began to understand life differently,” he said. “It’s better to live without fear. Fear … leads to many mistakes.” 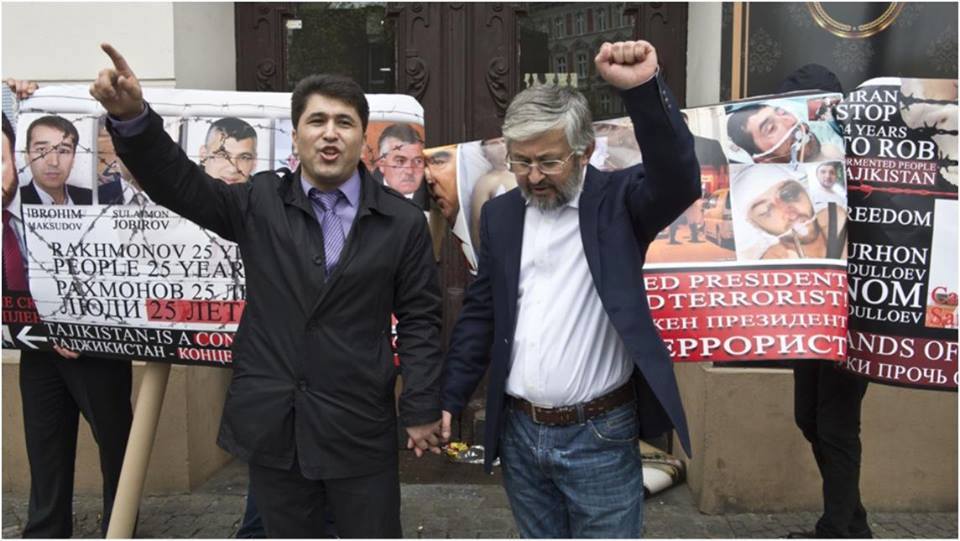 He soon turned his attention to the potential of the 2 million Tajik migrants in Russia. With elections in Tajikistan approaching in 2020, he believed mobilizing this population would be the best way to end President Emomali Rahmon’s dictatorial rule.

In November last year, he took advantage of an invitation to meet with senior Russian officials in Moscow to discuss his plans. Considering the alarming frequency with which Tajik dissidents have disappeared from Russia, it was a risky endeavor.

But Gadoev’s first trip to Moscow went well. Encouraged by the meetings he was granted, he travelled there again in February.

This time, he was met at the airport by Russian intelligence officials and driven to the 5-star Crowne Plaza Hotel in central Moscow. That evening he saw “Maxim,” the man responsible for arranging his meetings, whom he describes as “an assistant to a high-ranking politician close to Putin.” He later texted his family to reassure them that he was OK.

The next day, February 14, he met with Nikolaev, the man who arranged his trip and who he now says betrayed him. Nikolaev was the last person to see Gadoev before his kidnapping.

Immediately after meeting Nikolaev shortly before 6 p.m., Gadoev said, he left the hotel and got into a black BMW, sitting down next to Maxim. He was told that he would meet representatives of Putin’s administration, who would pick him up at an agreed-upon location. Twenty minutes later, the BMW parked next to a minivan. Gadoev grew concerned. The new vehicle had black tinted windows and was surrounded by eight identically dressed figures.

Prompted by Maxim, Gadoev got in and was immediately handcuffed. “We’re from the Interior Ministry,” Gadoev recalls one of the men saying.

He says his mouth was taped and a plastic bag wrapped tightly over his head. His pockets were emptied. Gadoev estimates the minivan drove for an hour before he was transferred to another, finally arriving at the airport long after nightfall. Gadoev recalls hearing the sound of airplanes and realizing that he would be taken to Dushanbe.

There they waited in the van for hours. At one point, Gadoev ripped open the bag, receiving numerous blows in return. Looking around him for the first time, he saw masked men he thought must have been with the FSB. His head was taped again.

Finally, Gadoev was taken onto an airplane.

“I heard the sounds of children and people speaking Tajik,” he remembers.

In a final flash of hope, he ripped off his bag for a second time and saw that he had been seated in the business class section. He screamed for help: “I’m Sharofiddin Gadoev and I’ve been kidnapped!” and called for the other passengers to contact the media.

With his two guards unable to restrain him, several air stewards were enlisted to get him under control, Gadoev says. They taped his legs together, forced him into the seat, and bent him over in a prayer position. “I was in this position for four hours. Head down and hands together,” he says.

Gadoev noticed that he was on a Somon Air flight. The airline did not respond to requests for comment. As the sun broke over Dushanbe, Gadoev’s plane finally touched down in Tajikistan.

Upon arrival, the authorities immediately transferred Gadoev to the basement of the interior ministry’s criminal investigation department.

Sleep-deprived and beaten, Gadoev was alone for the first time since his kidnapping in Moscow the previous night.

When Col. Bakhiyor Nazarov, deputy head of the department, walked into the dungeon, Gadoev knew not to expect a warm welcome.

What he got was three choices.

“Through torture or pressure … you will tell us everything you know. And then we will kill you,” the colonel told him. That was choice number one. The second was to spend at least 25 years, and possibly the rest of his life, locked up in prison.

Or, the colonel told him, he could denounce his allies in Tajikistan’s opposition movement. He could cooperate, stand in front of a camera, and say whatever the government needed him to say.

In particular, he was asked to denounce his associates in the opposition, especially the Islamic Renaissance Party (IRPT), now banned in Tajikistan. Gadoev had grown to know them well while exiled in Europe together.

He says he was asked to allege that IRPT had received funding from the Soros Foundation and Iran while branding its leader, Muhiddin Kabiri, a Shiite Muslim.

“They also told me to say that the IRPT and the opposition want to destabilize Tajikistan. And that I should say all this at a press conference,” Gadoev says.

He says he tried to stall for time, telling the men that he was sleep-deprived, injured, and in no condition to make important decisions. “They hit me with their fists,” he says. “I covered my face. They mainly hit me in the head, the back, the ribs, and stomach.”

The group in the basement was soon joined by more officials, including the first deputy minister of internal affairs, Abdurakhmon Alamshozoda, and the options were presented to him again.

“Alamshozoda said he had just left a meeting with the president,” Gadoev recalls. “‘They’re waiting for a decision from you,’” he says he was told. “‘If you cooperate with us, the president himself will pardon you. If not, we’ll tell the president you don’t agree and put you behind bars.’”

After some deliberation, reasoning that he had no way out, Gadoev agreed.

“And then the whole comedy began,” he says. “A movie that was made about me.”

Gadoev was provided with a new jacket, his own now being too blood-stained to appear on screen. In one video, filmed at a dacha outside Dushanbe, he was made to praise President Rahmon and call him “Founder of peace, leader of the nation.” He recalls three senior officials, including Alamshozoda, directing his actions, repeatedly cutting in and telling him how to stand and speak.

In another video, he is shown coming into a police building, as if he had just arrived in Dushanbe. Though he thought the scenario would come across as unlikely, Gadoev did as he was told, telling the camera that he had come to surrender to the Tajik authorities.

At that point, however, the news emerged in the outside world that Gadoev had been taken to Tajikistan against his will. He was taken back to the dacha, along with his mother. Kabiri had issued his own video saying that Gadoev had been kidnapped, he was told, and it was necessary to record a response.

As a small token of protection, a few days before his trip to Russia, Gadoev filmed a message at his home in the Netherlands. “You will see this video in the event that they kill me or kidnap me,” he said. “Or if I disappear without a trace.”

“If I suddenly appear on the screen of state television or on any YouTube channel declaring that I am in Tajikistan, where I returned by my own will … this should not be believed,” he said in the video.

It was published on YouTube on February 19, while Gadoev was in captivity.

“My mother was forced to insult Kabiri and say that he had deceived me and set me on the wrong path. All these generals, it’s like they have no mothers. They don’t have these motherly feelings. They forced her, used her motherly feelings to get what they wanted to hear. This was their worst act, inhuman,” Gadoev said. 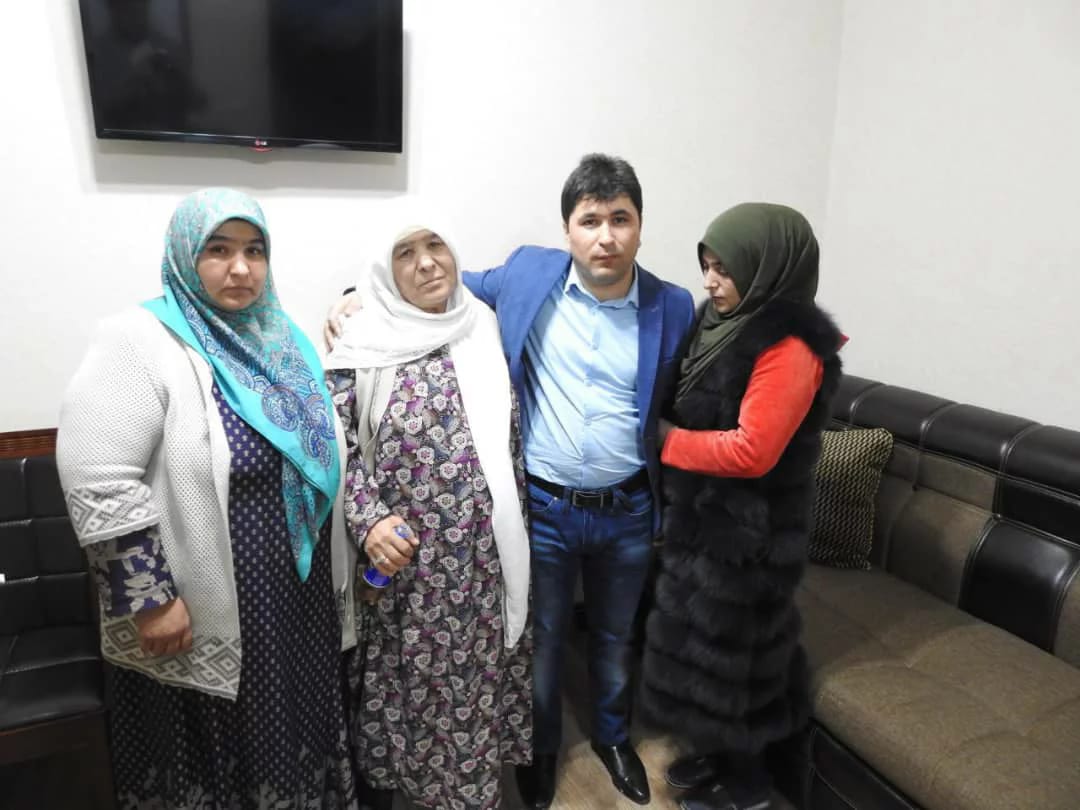 Credit: Mekhrubon Sattorov, Facebook Gadoev with his mother, sister, and niece before they were forced to hold a press conference in Dushanbe. February 2019.

Gadoev was kept in a one-room apartment in Dushanbe in between his appearances on camera. Although his torture ended after he agreed to cooperate, officials continued to issue threats.

“They interrogated me, showed photos of friends, journalists, human rights activists. I had to say if I knew anything about them,” said Gadoev.

On February 28, Gadoev’s ordeal finally ended. The German and Dutch foreign ministries had demanded his release, he said, and President Rahmon agreed.

“Mr. Gadoev was provided consular assistance through the German embassy in Tajikistan at request of the Netherlands,” confirmed Willemien Veldman, a Dutch consular spokesperson.

No representatives of the Russian or Tajikistani governments responded to reporters’ questions about the kidnapping.

Despite his ordeal, Gadoev does not intend to stop his opposition work.

“I’m convinced that the Tajik people should not live under a dictatorship,” Gadoev now says. “The Rahmon regime really threatens the lives of the citizens of Tajikistan. I’m convinced of it. And I will follow my convictions.

With additional reporting by Christo Grozev of Bellingcat and Roman Dobrokhotov of The Insider. (Read the Insider’s version of this investigation).