A Bulgarian Arms Broker with a History of Controversial Deals

Bulgarian Industrial Engineering and Management (BIEM), a Sofia-based arms broker, exported 205 Serbian-made “Coyote” machine guns to Saudi Arabia in 2015 and 2016. The weapons were later diverted to Syria, according to an investigation by the Balkan Investigative Reporting Network (BIRN) and the Organized Crime and Corruption Reporting Project (OCCRP).

But who is Petar Mandjoukov, the Bulgarian tycoon behind BIEM? 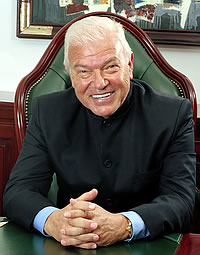 The 74-year-old, who owns a majority of the company, is known in his home country as an arms dealer, a role he performed as an agent for State Security for more than two decades during the Cold War, according to documents released by the Files Commission, a special panel investigating Bulgaria’s Communist era secret service.

In 1977, he started work for Kintex, a powerful state-owned trading company that trafficked arms to rogue states and terrorists, as the Bulgarian state has since admitted. It is not clear when this job ended.

Few details are known of Mandjoukov’s work in the weapons trade. He makes no mention of BIEM on his website, which describes his business empire, and the company has received little media attention since it was set up in 2001. It was previously known by the name Norwood Bulgaria.

But both Mandjoukov and BIEM are mentioned in US diplomatic embassy cables published by WikiLeaks in 2010.

As part of Washington’s official process for approving the export of US-made weapons to Georgia sometime around 2009, the State Department performed background checks on BIEM, which was acting as a middleman in the deal.

An official request dated July 2009 from the State Department in Washington to US embassies in Sofia, Tbilisi and other regional embassies, and published by WikiLeaks, described BIEM as being connected to “organized crime and grey arms trafficking.” Questions were also raised about why the firm was receiving a commission on the sale, despite it not being listed on the export license and not being registered as a broker in the US “as required by the International Traffic in Arms Regulation (ITAR).”

In November 2016, the UN sanctions committee on South Sudan revealed that in July 2014 BIEM had sold 4,000 assault rifles 2014 to a Ugandan company that delivered them to Uganda’s Ministry of Defense. The weapons were then diverted to South Sudan in breach of UN sanctions and fueled the bloody conflict in the world’s youngest state.

Mandjoukov’s private office declined to respond to questions related to his past. BIEM said it was unable to comment on claims about arms deals in Georgia and Uganda.

Mandjoukov’s electronics firm, Mashinoexport, was also named in a CIA-led investigation into weapons of mass destruction in Iraq. The Duelfer Report, published in 2004, found that the firm took part in the Iraqi oil-for-food program, helping to funnel funds from Saddam Hussein’s regime to the Bulgarian Socialist Party in the 1990s. Following the report’s publication, Mandjoukov insisted none of the money from the oil trade had gone to the party.

But the tycoon is closely tied to the Socialist Party, currently the second-largest party in Bulgaria’s Parliament. Rumen Radev, the country’s current president, was backed by the party in his 2016 campaign.

Mandjoukov was at one point the owner of the pro-Socialist newspaper Duma, and was awarded Bulgaria’s top honor, the Stara Planina, in 2002 by Socialist President Georgi Parvanov.