Disgraced United States lobbyist Paul Manafort plotted with partners in Ukraine to rig that country’s largest telecommunications privatization deal, which would have netted him a large payoff had he found financing, according to emails obtained by OCCRP. 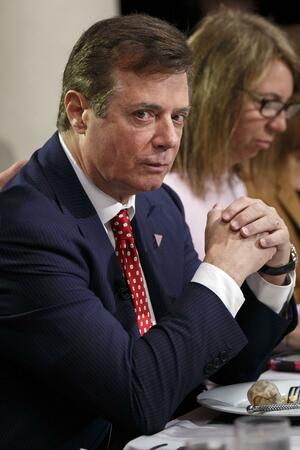 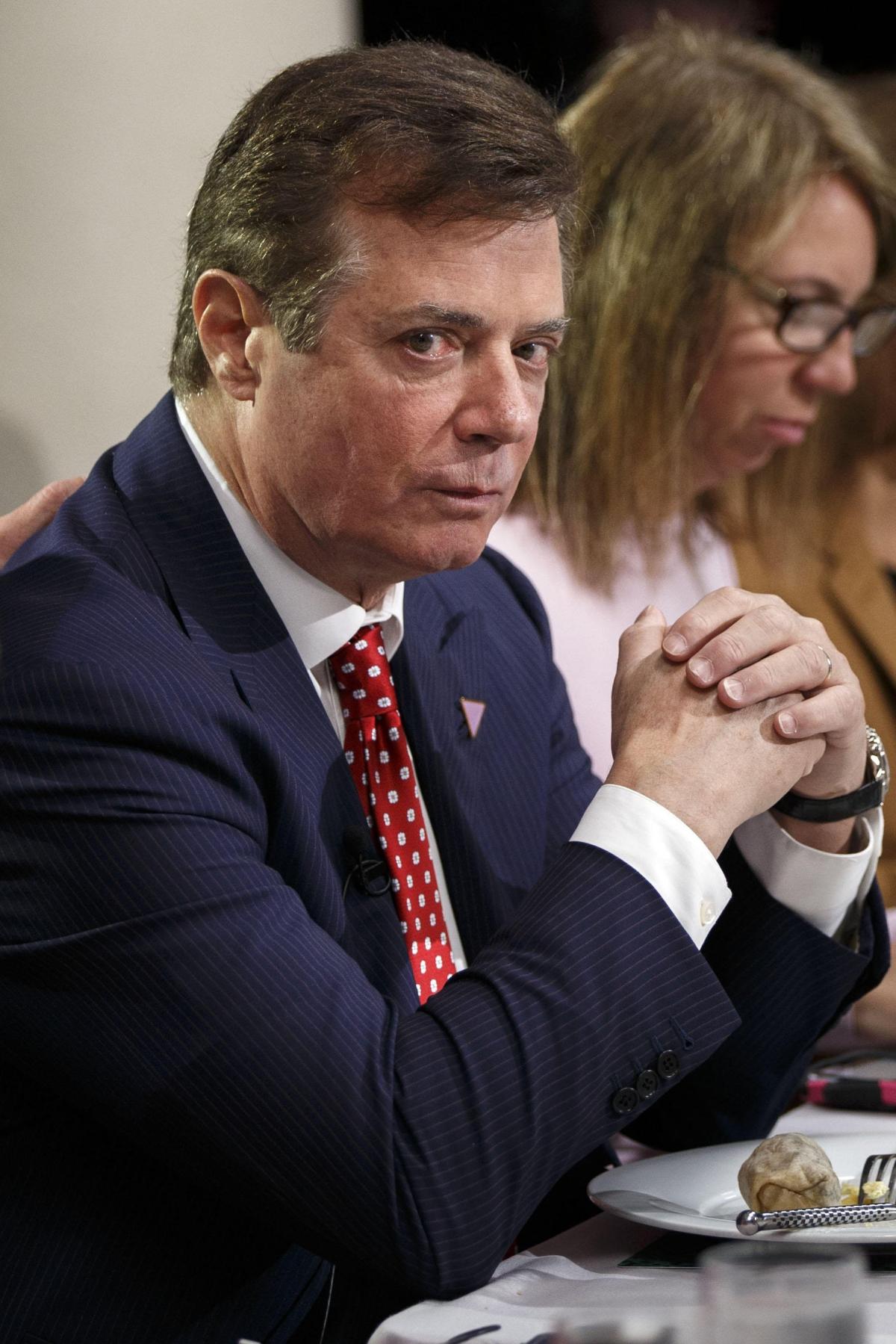 After Manafort’s search for investors fell through, the deal went ahead without him. When Ukrtelecom, Ukraine’s public telephone operator, was finally privatized, one of the buyers appears to have been Dmytro Firtash, a gas and media mogul who is fighting extradition from Austria to the United States on corruption charges.

Manafort, who is now serving a prison sentence for tax and bank fraud offenses, was for a time chairman of U.S. President Donald Trump’s 2016 campaign. His conviction stemmed from the U.S. Department of Justice investigation led by Robert Mueller into Russian interference in the 2016 election.

Manafort has a long history in U.S. politics and business, and a network of connections spanning the globe. His relationship to Ukraine stretches back to the early 2000s, and he was involved in efforts to elect Viktor Yanukovych as president in 2010.

During that campaign, Manafort worked closely with two local politicians: Yulia Lovochkina, a member of parliament, and her brother, Serhiy Lovochkin, who became Yanukovych’s chief of staff. Manafort and the Lovochkin siblings lost no time in planning deals to capitalize on Yanukovych’s victory, according to thousands of emails leaked to OCCRP that document a decade of correspondence between those three and others.

Seven months after Yanukovych won the election, Lovochkina wrote to Manafort about the planned Ukrtelecom privatization, suggesting that their influence on the bidding process could enable them to snap up the company at a favorable rate.

The leaked emails also reveal that Serhiy Lovochkin was the secret funder of a lobbying campaign Paul Manafort orchestrated in the European Union.

“Dear Paul! Please see below some thoughts on projects we discussed,” she wrote in a letter attached to a Sept. 13, 2010, email. The letter made it clear that her brother’s position as a top official in the Yanukovych government could prove useful.

“We can influence the conditions of the auction. So there is a space for maneuver,” wrote Lovochkina, who, in addition to sitting in the Ukrainian parliament, was also a delegate to the Parliamentary Assembly of the Council of Europe.

She informed Manafort that she and her brother could work to “structure the conditions of the tender” in their favor, including barring any companies in which any state had a stake of over 25 percent. 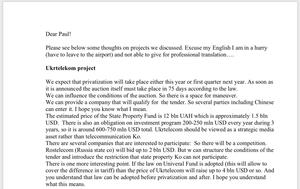 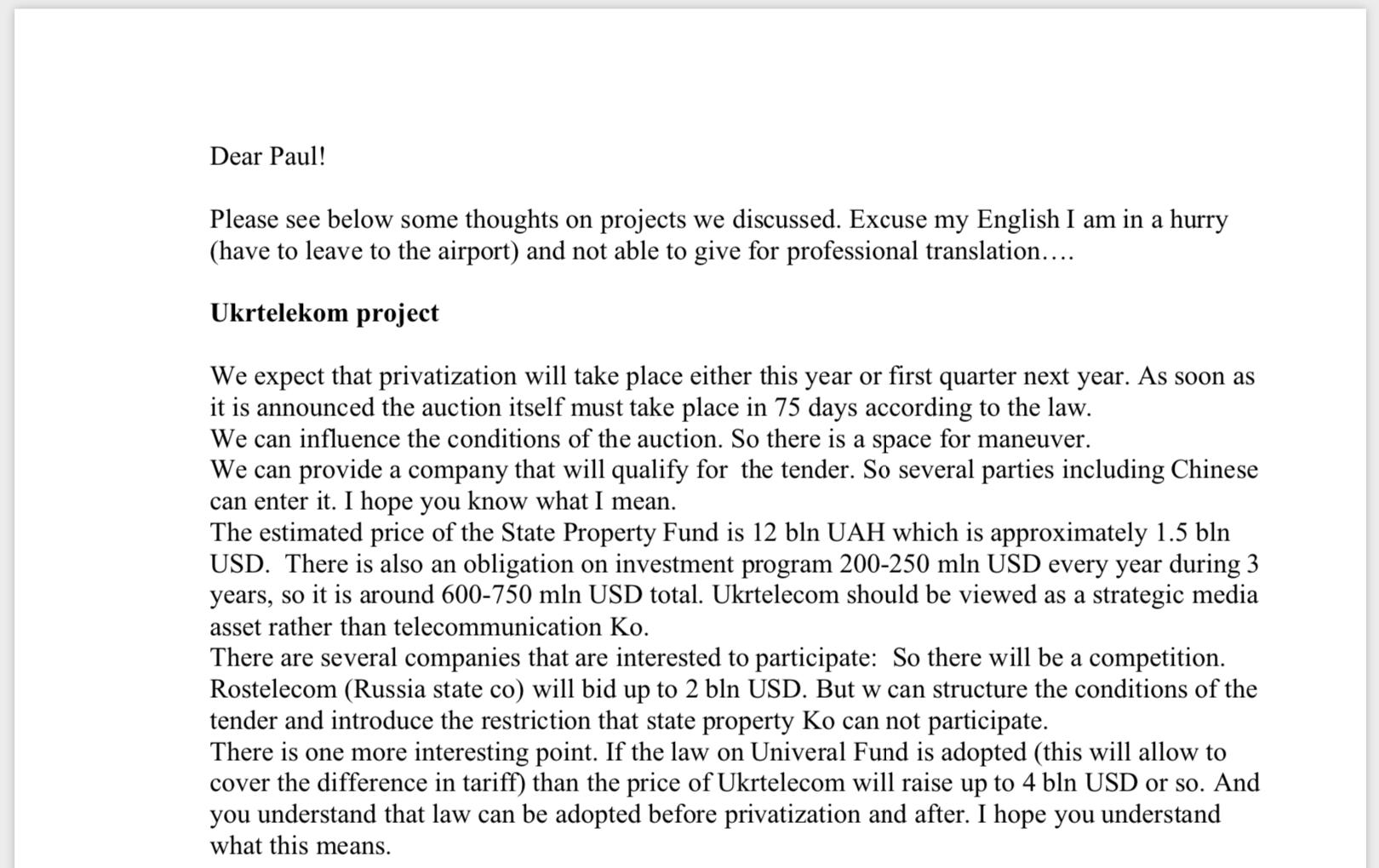 “We can provide a company that will qualify for the tender,” she wrote.

Lovochkina also noted that proposed legislation — a fund that would cover Ukrtelecom’s losses in servicing rural areas — could nearly double the company’s value, to around $4 billion.

“And you understand that [the] law can be adopted [either] before privatization [or] after. I hope you understand what this means,” she wrote, referring to the fact that the timing would affect the group’s plans.

The fund to cover Ukrtelecom’s losses was never implemented. But in the moment, Manafort responded to Lovochkina’s email with enthusiasm.

“I have forwarded the information to the appropriate people,’’ he wrote on Oct. 14. “I will have a conf call with them tomorrow. I will propose a meeting to be held next week. Goal of meeting is to have players at the table to discuss framework, proposal and next steps. Who would attend from your side?”

In reply to Manafort’s invitation, Lovochkina wrote that Grigori Dzekon, then the head of Ukrtelecom, would be among the attendees of his proposed meeting, suggesting that he was party to the insider privatization scheme. In an Oct. 5 email, Dzekon had advised Lovochkina against sharing too much information about the expected conditions of the tender with potential investors.

Ultimately, Manafort was unable to secure financing for the purchase of Ukrtelecom, he wrote to Lovochkina on Nov. 16, despite “pressuring” a potential funding source in China. The scheme went ahead without him.

Manafort’s lawyers did not respond to requests for comment.

The leaked emails also reveal that, through a proxy, Serhiy Lovochkin and Yulia Lovochkina were co-owners of a Latvian bank that hosted the Russian Laundromat, a vast financial scheme unmasked by OCCRP in 2014.

Just under ten percent of the bank, Trasta Komercbanka, was held by U.K. citizen Charles Treherne.

But according to the emails — in which the Lovochkin siblings are referred to as ‘Ginger’ and ‘Fred’ — Treherne in fact ran their family office. Under Lovochkina’s direct supervision, he handled their offshore firms, French villa, and art collection.

A key part of Treherne’s work was to find ways of hiding the Lovochkins’ beneficial ownership of various assets. To this end, he and others acted as proxies for the power-broker siblings.

“[Y]ou should never and nowhere use Principle`s name,” one of the consultants in the family office advised Treherne in an email, referring to his client. “All politicians must stand apart from business during three-five generations,” he continued. “Foreign businessmen with good reputation should be ultimate beneficial owners.”

A lawyer for the Lovochkins denied their ties to any wrongdoing, saying reporters’ questions had “no basis in fact.”

Besides being owners by proxy of the bank that hosted the Russian Laundromat accounts, the Lovochkins also used a system that showed up in OCCRP’s Laundromat data for their own payments, according to the leaked emails.

For instance, in 2010, Treherne instructed Yulia Lovochkina’s secretary how to correctly draw up a fake contract to make secret payments via New Zealand shell firm Lynform Capital, an offshore suspected of being part of the Laundromat.

“The Business activity [in the fake contract] should be consistent with the stated activities of the company, e.g. Metal trading, or ice cream manufacturer, gun running; whatever company Lynform has told the Bank,” Treherne explained.

Dzekon remained CEO of Ukrtelecom after it was privatized, until 2011, and retained a supervisory board seat until 2013. He then relocated to California, where he co-founded an information technology company. He told OCCRP he could neither “deny or confirm the authenticity” of the emails and said he knew nothing about the Lovochkin siblings’ efforts to influence the Ukrtelecom privatization.

Lawyer Dan Shefet represents the Lovochkins, who today are both members of Ukraine’s parliament, where Serhiy is one of the leaders of the country’s largest opposition party. Shefet rejected any suggestion that Serhiy Lovochkin was involved in manipulating the telecom privatization, responding with a “clear, emphatic and unequivocal rejection of any and all of the ill-concealed accusations in question.”

In a message sent from her parliamentary e-mail address, which was CC’d to Shefet, Lovochkina told OCCRP that she had neither written nor ever seen the letter that had been sent from her account. She called the leak of the emails an attempt “to destabilize the political scene in Ukraine by defaming duly elected Members of Parliament and thereby inciting discord and distrust.”

“We Introduced Our Bidder”

The deadline to bid for Ukrtelecom came in December 2010.

In accordance with Yulia Lovochkina’s email to Manafort, the tender excluded any companies in which governments owned a stake of 25 percent or more. National or international firms that already controlled a quarter of Ukraine’s telecom market were also excluded.

These stipulations ruled out a number of companies that had expressed interest. In the end, the sole offer came from the European Privatization Investment Corporation (EPIC), a little-known investment firm based in Vienna. While Ukrtelecom had estimated its own value at $2 billion in the run-up to the privatization, EPIC acquired it for just over the minimum bid of $1.3 billion.

At the time, EPIC co-owner and managing partner Peter Goldscheider told London’s Financial Times newspaper that the company was not a proxy for any oligarch and that the tender had been fair.

Goldscheider, who now works with Rivada Networks, a wireless technology company, told OCCRP that ongoing litigation and a non-disclosure agreement prevented him from commenting.

But evidence obtained by OCCRP contains clues about who was behind EPIC. 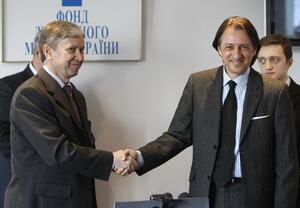 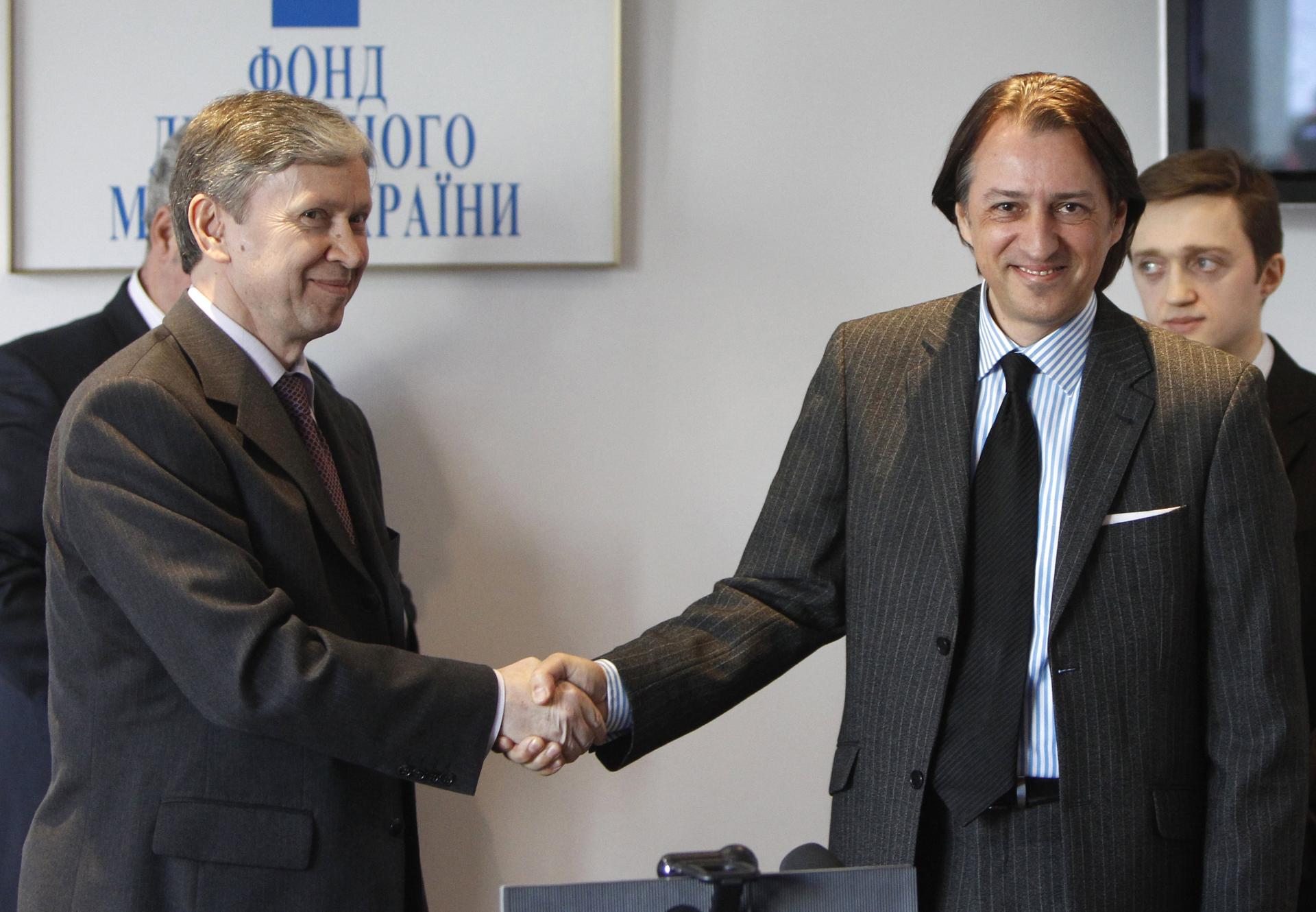 Credit: Gleb Garanich/Reuters Oleksandr Ryabchenko (L), head of the Ukraine State Property Fund, shakes hands with Wolfgang Herritsch, a representative of Austrian investment firm EPIC, during the meeting in Kyiv in 2011 at which EPIC bought a major stake in Ukrtelecom from the Ukrainian government.

In November 2010, just a few weeks before the privatization, Yulia Lovochkina had written to Manafort: “This is to inform you that we introduced our bidder. There was no possibility to wait any longer.”

In its privatization bid, EPIC declared its beneficiaries to be Goldscheider and his four co-owners. But corporate records show that just two years after acquiring Ukrtelecom, EPIC’s role in the ownership structure was replaced by a Cyprus-registered firm called Raga Establishment.

A Fight for the Spoils

In June 2013, Raga sold Ukrtelecom to System Capital Management (SCM), a company owned by Rinat Akhmetov, one of Ukraine’s wealthiest citizens, for $886 million. But the deal went bad and Raga sued SCM in London and Cypriot courts, having received just one installment of $100 million.

The court proceedings offer some additional detail on the beneficiaries of the various companies involved, again highlighting Firtash’s role.

SCM said in a June 6, 2018, statement that it attempted to back out of the purchase after discovering that Raga had failed to fulfil commitments to invest in Ukrtelecom’s infrastructure, raising the risk that the company would be repossessed by the state.

In its lawsuit against SCM, Raga declared — in a contradiction of EPIC’s previous position that its beneficiaries were Goldscheider and his business partners — that its sole beneficiary at the time of the sale was a Ukrainian banker named Denys Gorbunenko. SCM, in turn, argued to the court that Gorbunenko was a Firtash proxy.

Leaked emails show further links between Gorbunenko and Firtash: Gorbunenko took part in efforts by Firtash’s legal and public relations teams to build a defense case following Firtash’s 2014 arrest in Vienna on charges that he had paid bribes to acquire a titanium mining permit in India.

While Manafort was unsuccessful in cashing in on the telecommunications privatization scheme, it was not his first time doing business with Firtash. In 2009, the two men discussed the possibility of establishing an international fund to buy distressed properties, according to the leaked emails.

That same year, Manafort ended an email to Firtash with an optimistic salutation: “Our friendship and partnership will last for many years to come. To our current and future successes!”