Mercury in the Air, in the Water, in the People

by OCCRP
DONATE
Above: A miner prepares to descend one of the gullies (mining shafts) in the La Culebra of El Callao sector to extract gold-bearing rock. Credit: Juan Barreto

Using circular motions, Misael Reyes massages soft wet mud over a copper plate, causing it to flow – and reveal its riches. “Do you see that silver drop forming?” he asks. “That’s the mercury we use to start separating the gold from the ore we pull out of the mines and grind in these mills.” 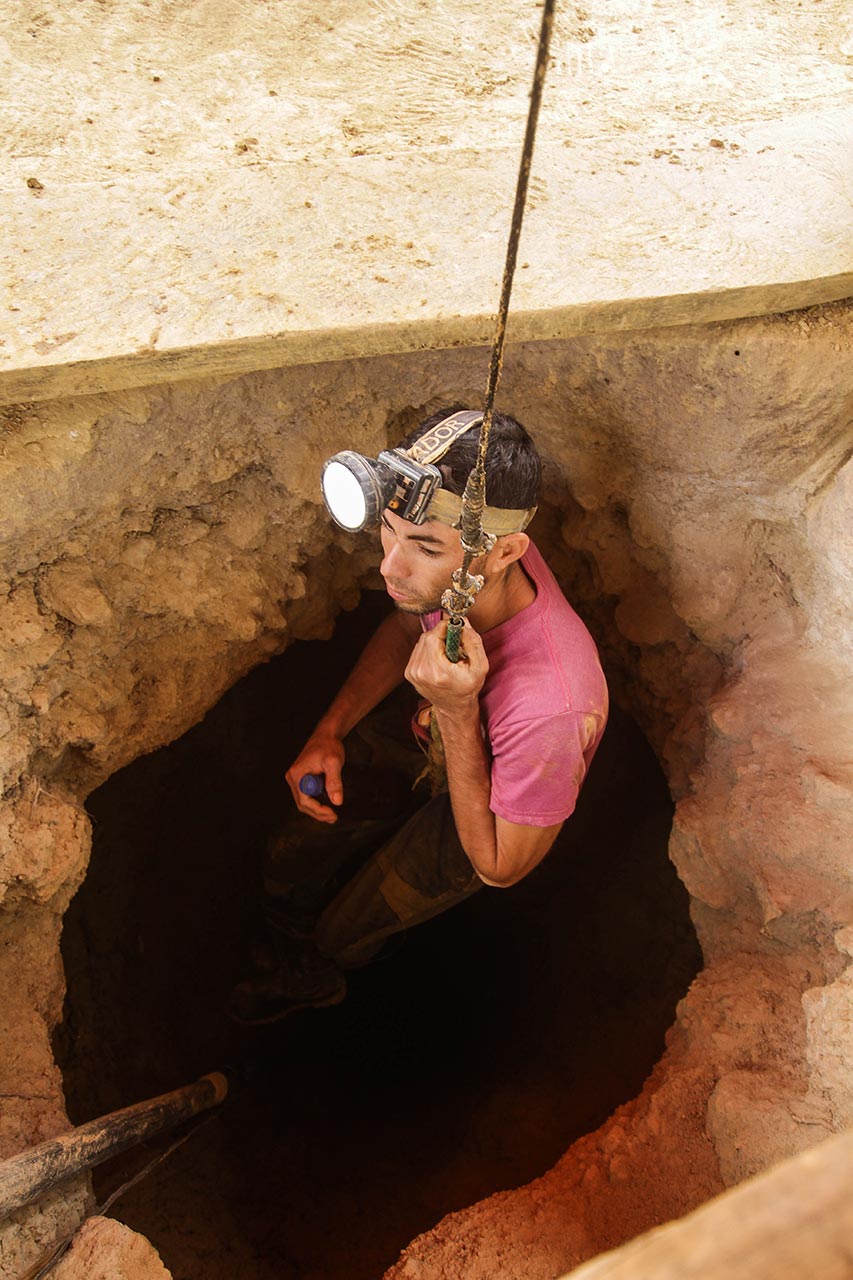 Credit: William Urdaneta A young miner begins his trip down into the gully, where he will gather gold-bearing rocks.

Reyes knows the process well. He has spent 36 of his 56 years working the gold deposits of El Callao, a rural municipality in Venezuela’s Bolivar state near the eastern end of the Orinoco Mining Arc.

Reyes demonstrates the process and explains each step: First, mercury is mixed with the crushed ore that contains gold. The gold and mercury react to form an amalgam, a clay-like substance which sticks to the copper plate. With a spatula, he collects the amalgam, puts it in a damp cloth, and squeezes it. Then he puts it on a shovel, adds more mercury, and heats it with a blowtorch to vaporize the mercury, leaving only gold.

The miners work in a zinc-roofed shed without walls. Yet the mercury vapor still permeates the air, so that neither the nine miners working there nor two visiting journalists can avoid breathing it in. The process uses 10 to 25 grams of mercury for each gram of gold produced.

Mercury, a heavy silver-white metal highly toxic to living tissue, poisons all by-products of the operation. The drier materials – ground-up ore, sand and dirt – collect in mountains that will be re-processed to extract any remaining gold. The soft mud goes into an artificial pond about five meters in diameter and less than a meter deep. None of the miners use any equipment to protect them from the mercury.

Reyes claims there’s no need. “We’ve been working on this our whole lives, we’re immune already,” he insists. He also dismisses the idea that the water they drink from the nearby river could be poisoned. “The land sucks in the mercury before it reaches the river,” he says.

Reporters witnessed this gold processing demonstration in early April 2017 in Molinos Calderón, one of approximately 60 “mills” or ore-processing facilities that have operated for decades in El Callao’s La Ramona sector. This mill is a part of the Socialist Mining Brigades, a pilot initiative promoted by the government this year as a new way to organize the area’s small-scale miners. (See: Socialist Mining Brigades Face Crime and Falling Output)

But nobody is supposed to be using mercury. 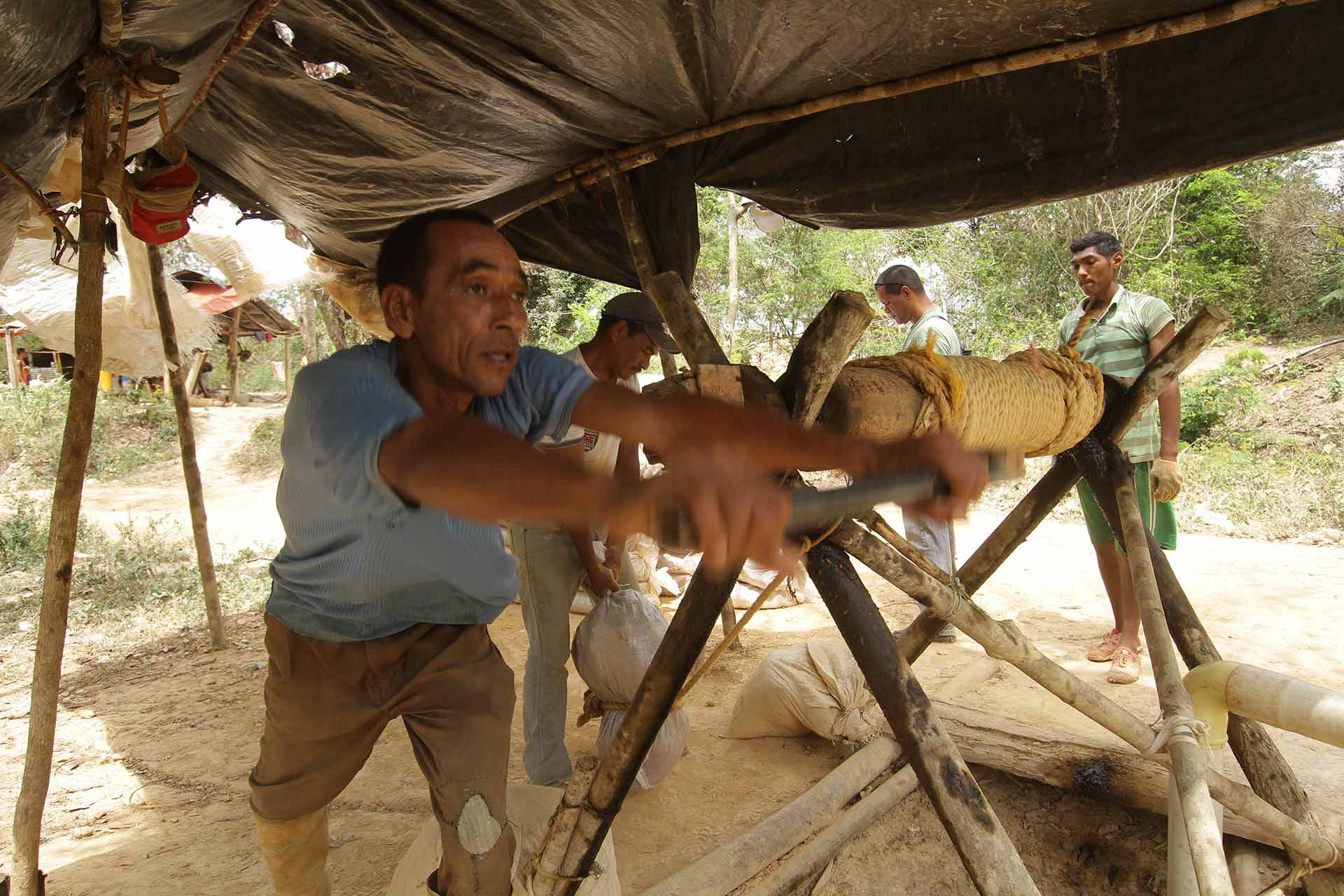 A presidential decree, published in the Official Gazette in August of 2016, forbids the use, possession, storage, and transportation of mercury as a method of obtaining or processing gold or any other mineral in any mining operation in Venezuela. The ban, part of the Orinoco Mining Arc project, was intended to placate environmentalists but is widely ignored by miners – many of whom have never even heard of it.

Many in government, on the other hand, believe mercury is no longer in use. Officials proudly announced in November of 2016 that the first gold transferred from the Orinoco Mining Arc to the Central Bank’s vault was “green,” meaning that it had been extracted using environmentally friendly practices.

In fact, the miners in La Ramona say, they do extract gold using mercury, and without taking even the most minimal safety measures for the workers or the environment.

Despite efforts by the brigades to organize the small-scale miners of La Ramona sector in El Callao, they say nothing has changed in the way they work, except for risks posed by the growing power of criminal gangs operating in the area. (See: Gang Lords Rule the Orinoco Mining Arc)

Credit: William Urdaneta Gold-bearing rocks are fed into the grinding machine in the milling operation.

The Socialist Mining Brigades, announced in November 2016 and created by formal decree in January 2017, is a pilot project that may be intended to bring illegal small-scale mining under control. 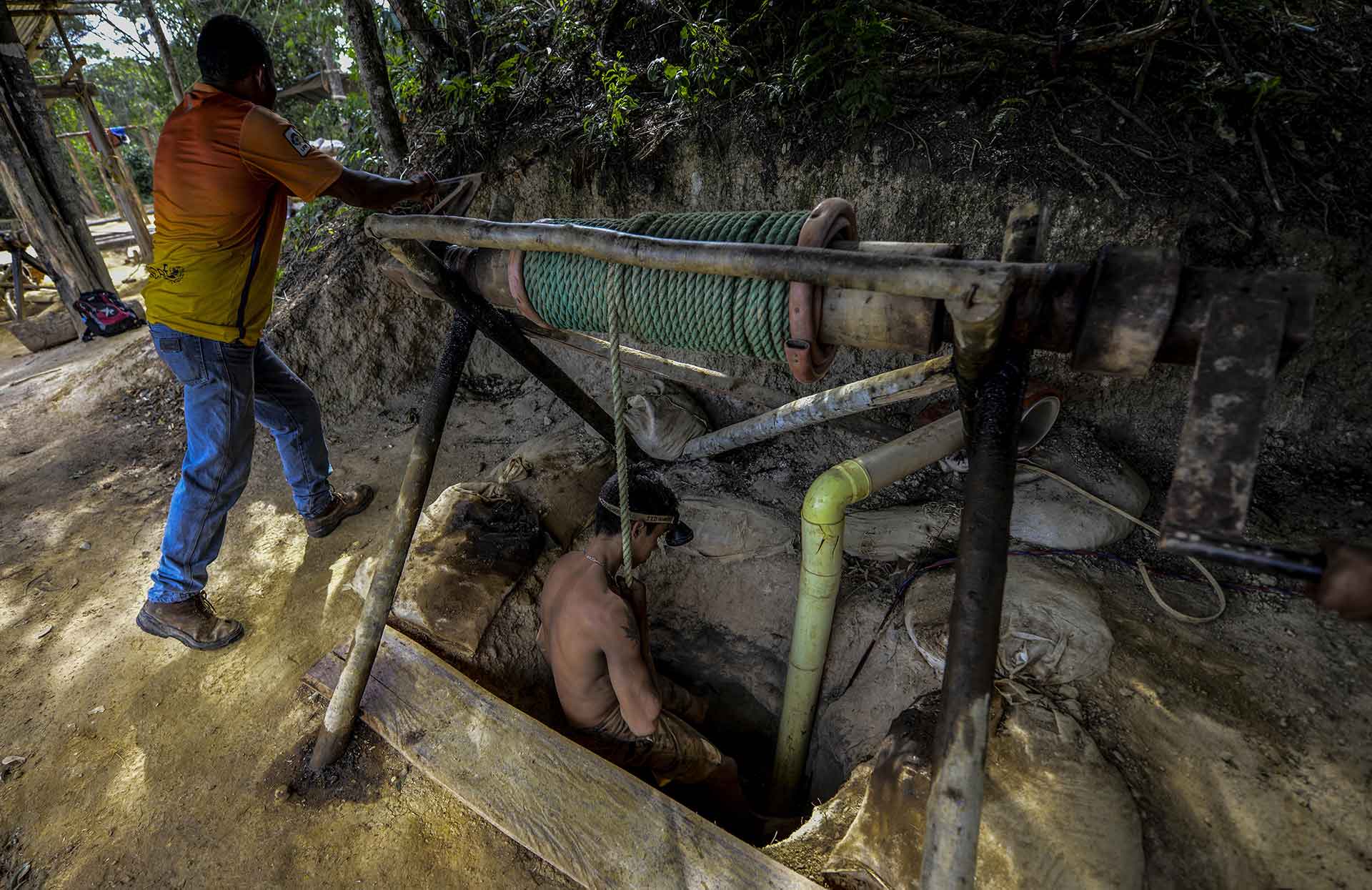 The plan is to ally hundreds of miners working in the Nacupay sector, a part of the larger 97-hectare El Callao district where the Venezuelan General Mining Company is located. The brigades, formed from groups of miners, have the right to exploit minerals in Nacupay only. But brigades have also formed in the La Ramona sector as well.

The authorization is valid for up to nine years. It doesn’t imply ownership of the land nor of the minerals underneath it, and it can’t be transferred, rented, sublet, sold, or bought by any other individuals.

The government said that each brigade would pay the Venezuelan state a small royalty of 3 percent of the value of the final mineral product, which would be sent to the Social Mining Fund and be reinvested in social projects.

Miners, however, say nothing like this has happened, and that they are continuing to work as they always have, selling their gold to whoever offers the best price.

The picture is complicated by rapid-fire changes in the newly formed Ministry of Ecological Mining Development, which has had three ministers in the past seven months. Roberto Mirabal was replaced in February by Jorge Arreaza, who was promoted and replaced in August by Victor Cano.

What has remained consistent, however, is the ministry’s stance that it’s all good news: more and more gold is being mined, in an environmentally responsible manner.

In November 2016, the brigade concept was announced and then-Minister Mirabal almost immediately declared that the brigades had produced the first gold ingots to arrive from the Orinoco Mining Arc. He described them as “ecologically produced” – in other words, the miners hadn’t used mercury. One month later, he claimed that 400 kilograms of gold (in round numbers and without much detail) had been extracted over six months. 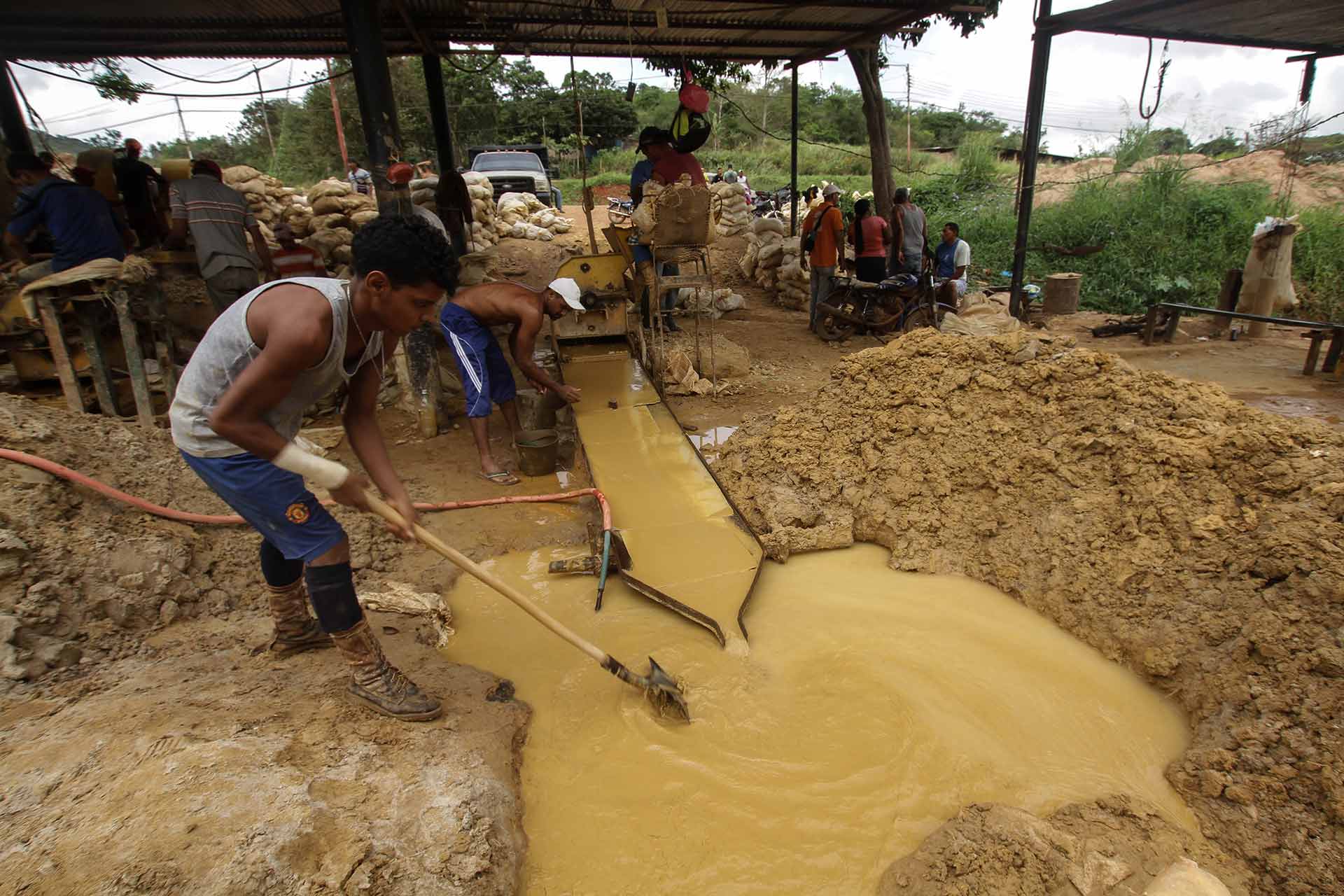 During his six-month stint as minister, Arreaza made similar claims. But he also admitted that, since the decree, local miners have continued using mercury. It will take months to persuade them otherwise, he said in a May interview published on the ministry’s website.

And in September, Cano, the current minister, announced additional gold amounts that brought the total gold production in the Orinoco Mining Arc to nearly 4,000 kilograms over 15 months.

Back in the mill, Reyes raises his voice over the noise of the machine grinding the ore. “There are no changes in the way we’ve always worked,” he says. “We’re still breaking off the ore in the [mines], transporting the material to the mills, and using the mercury to separate the gold.”

Gullies and Our Daily Bread

Itamar Fernández and Germín Gutiérrez work in El Callao’s La Culebra sector, and they are not a bit worried about the mercury ban – because they have no idea that there is one.

The sector has approximately 20 “gullies,” as the miners call the mines. These are holes in the ground about 1.5 meters in diameter and up to 40 meters deep, dug at least a decade before the Orinoco Mining Arc was created. Says Fernandez, “Nothing’s changed here. Mercury is our daily bread.”

Gutiérrez says that miners here have not been organized into any brigades, and that they continue to work as they always have, without any help from the state.

The World Health Organization has determined that informal or small-scale mining accounts for 37 percent of mercury emissions worldwide, and that it is the biggest single cause of mercury pollution in air and water.

Jorge Paolini of the Universidad Politecnica de Catalunya investigated how much mercury was being consumed by inhabitants of the once-pristine Caroní river basin, a tributary of the Orinoco River in Bolivar state. He concluded that between 2000 and 2007, the concentration of mercury in fish consumed increased from 2.7 to 7.9 milligrams per gram.

A study by the Society for Wildlife Conservation, the La Salle Foundation, and the Universidad de Oriente conducted between 2011 and 2012 revealed that 92 percent of the 152 women belonging to the local Yekuana and Sanema ethnicities who were evaluated were contaminated by eating fish contaminated with mercury.

Though the World Health Organization has established a tolerable level of mercury of 2 parts per million (ppm), the hair samples of the women were found to have an average level of 9.38 ppm. Almost 37 percent exceeded 10 ppm, 7 percent were at 20 ppm, and one extreme case reached 45 ppm – over 22 times the permissible limit.

“These results show that the indigenous population is contaminated with mercury even at distances greater than 200 km from the discharge point of the pollution generated by the mines to the main channel of the Caura river, although the levels appear to be slightly lower in distant sites,” said Salvador Penna, one of the scientists who participated in the research.

What Alternative Do We Have? 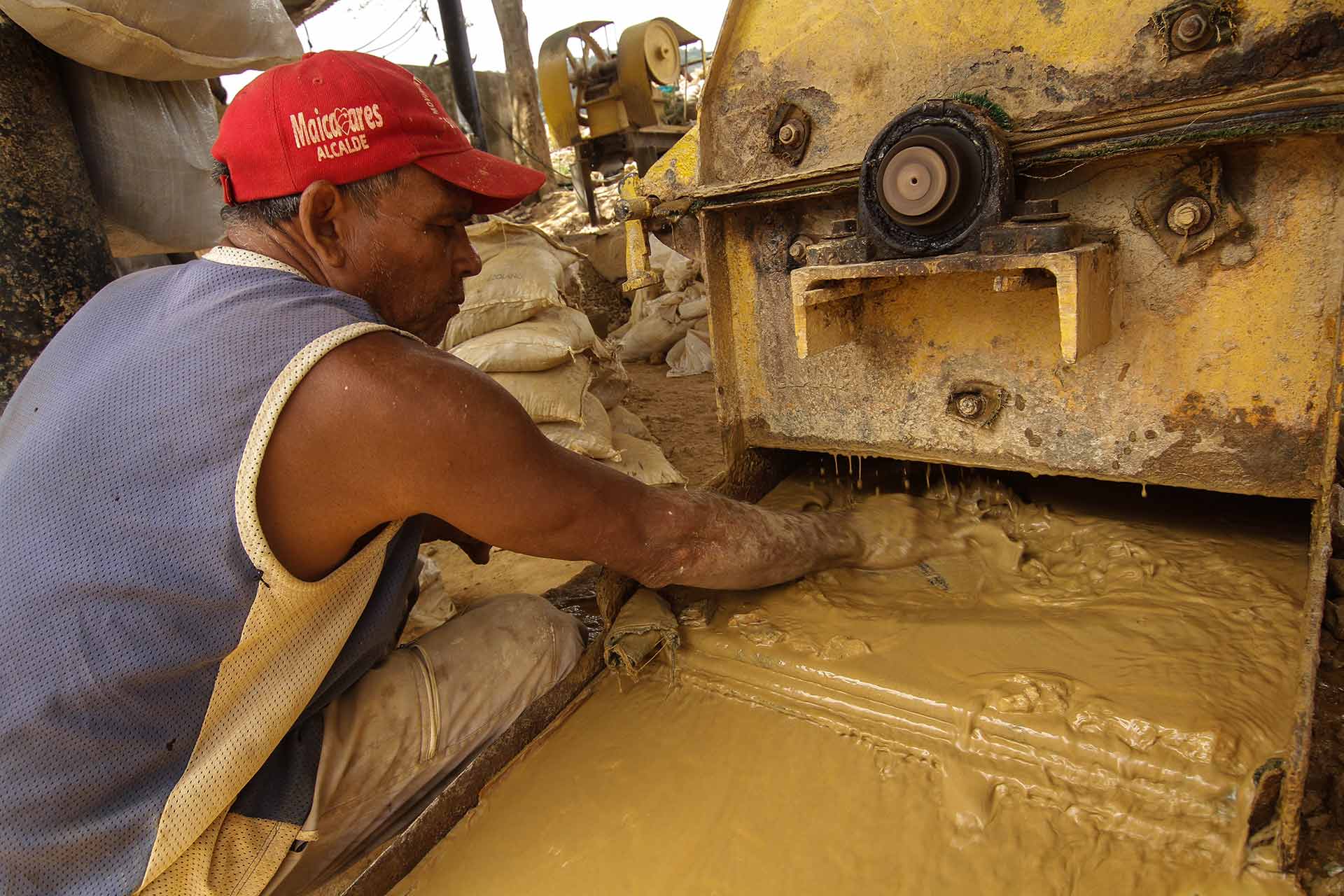 Miners say the mills – small companies that have the machinery and equipment to grind the rocky ore extracted from the mines – are a key step in the gold extraction process. They also provide the miners with the mercury they need to extract the gold.

Alexis Chaurán, spokesman for La Ramona’s Revolutionary Miners and Millers Association, says they have no choice. “We keep working the traditional way. If we stop using mercury, how do we extract the gold? We don’t comply with the ban on mercury because the state must be the one to offer alternatives. If we ban mercury, we destroy small-scale mining, and 80 percent of the people in El Callao make a living from this.”

A number of groups have pointed out that there are alternatives to mining gold with mercury. In the Philippines, a system using borax and gravity is equally or more effective. But in Venezuela, it appears that these other methods are not being considered.

According to the World Health Organization, mercury is among the top ten chemicals of major public health concern, but in El Callao’s mines, precisely where the government is trying to organize small-scale miners into Socialist Mining Brigades, its use is deeply ingrained – and considered indispensable.