by Édgar López for Efecto Cocuyo and OCCRP
Tweet this Share this on Facebook DONATE
Above: The government has launched a pilot project to to form small-scale miners into “socialist mining brigades”. Credit: William Urdaneta

In 2011, as then-President Hugo Chavez nationalized the gold mining industry, the leftist leader claimed he had a new idea that would make life better for all Venezuelans. He described a new “mining arc” south of the Orinoco River, in the northern Amazon, that could be exploited for vast minerals. 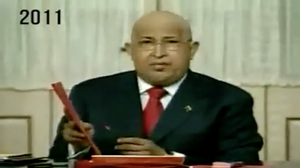 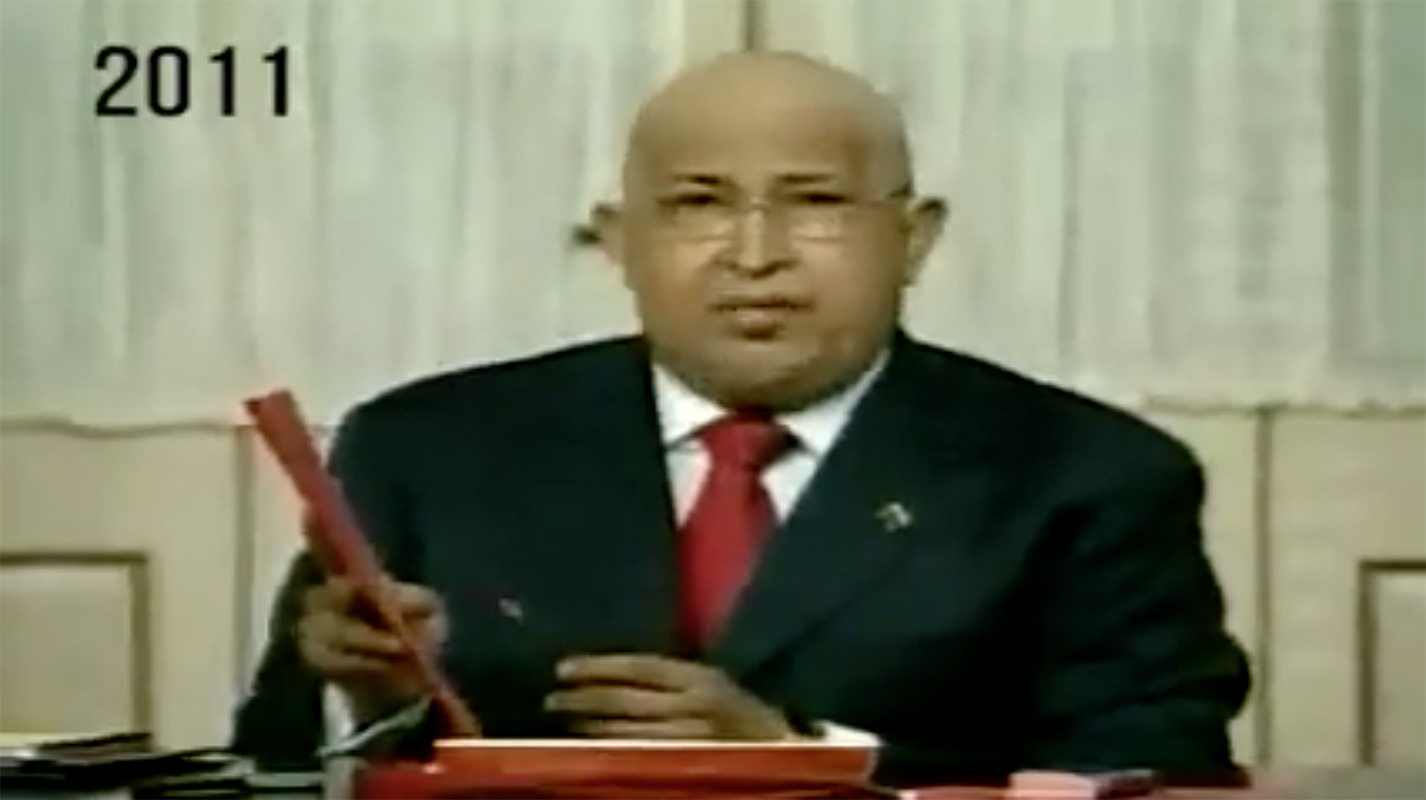 Credit: screen capture from Government of Venezuela website video In 2011, then-President Hugo Chavez talked about a new mining “arc” south of the Orinoco River in the northern Amazon that could produce minerals worth billions.

“There is a huge potential for economic power,” Chavez said.

While Chavez died before he was able to enact his plan, in February 2016 his successor Nicolas Maduro started implementing the Orinoco Mining Arc. That November, Maduro promoted a new model of extracting minerals that would revive the country’s stagnant mining industry – an “army” of miners called the Socialist Mining Brigades.

The brigades were intended to replace the illegal mining that had flourished in the region. They would sell the gold they extracted to Minerven, the state mining company, which would keep 3 percent of its value for itself. The gold, Maduro said, would then go to the national bank to “strengthen the reserves,” while half of the proceeds would go to health, education, and other social spending. And the miners would no longer use mercury – he had banned the use of the dangerous chemical in any mining operations in an August decree. The system was finally begun in January 2017.

The president had promised that Venezuelan mining would become cleaner, safer, and more productive – but that’s not how it has worked out.

The brigades continue to use mercury as they have in the past. Many sell their gold not to the government as the plan envisioned, but to the highest bidder. And meanwhile, the miners face the continuing problem of organized crime groups demanding a cut of their earnings and fixing the price of gold in the region. (See: Gang Lords Rule the Orinoco Mining Arc)

Gold production in Venezuela has been plummeting for a long time. 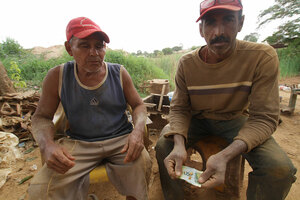 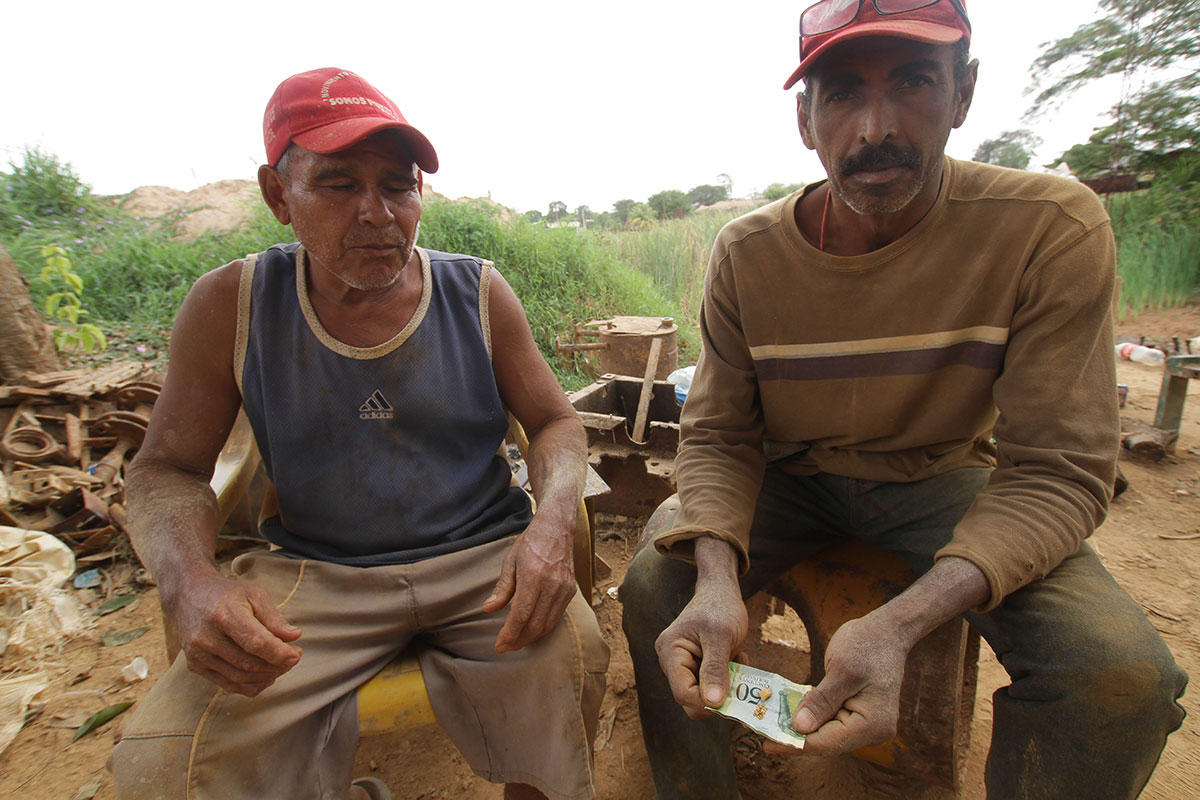 Credit: William Urdaneta At Molinos Calderón, in the village of La Ramona of El Callao sector, a miner shows portions of gold on a bill of 50 bolivars. Gold is used as currency in towns in the south of the Bolivar state.

In 2011, when the industry was first nationalized, the official annual gold output of the country’s mines was nearly 4,700 kilograms. It fell steeply in the following years. By 2015, the Venezuelan Mining Corporation said it produced just 430 kilograms – 28 percent of the planned total and a 91 percent drop from the first year of nationalization. The Energy and Oil Ministry reported a different figure of 558 kilograms for 2015 – 47 percent lower than in 2014.

In the 2015 annual report of the Ministry of Oil and Mining, the Venezuelan Mining Corporation provided various reasons for missing its goals: lack of transportation for the staff, protests over drinking water supplies, power failures, and supply shortages.

The official output has only continued to drop since, while an unknown amount of gold has been mined and sold illegally. 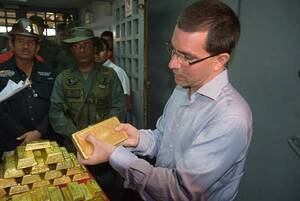 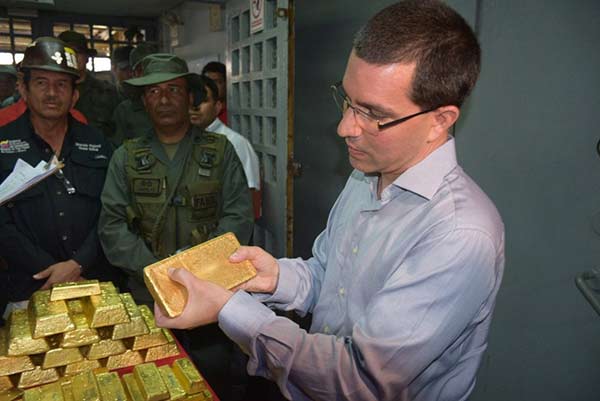 State ministers insist the new mining brigades are working. During Roberto Mirabal’s short tenure as Environmental Mining Development minister (he was replaced in February 2017, just seven months after his appointment), he claimed that 400 kilograms were mined in six months in 2016, a rate of gold output double that of 2015.

This year, now that the Socialist Mining Brigades are at work, the claims regarding gold extraction in the Orinoco Mining Arc have kept on climbing:

The figures provided by Arreaza, amount to over 1,000 kilograms of gold transferred to the Central Bank’s vaults in just under two months. His tally does not even include the 400 kilograms claimed by his predecessor. And in September, Victor Cano – who replaced Arreaza one month before, announced additional gold amounts that brought the total claimed gold production in the Orinoco Mining Arc to nearly 4,000 kilograms over the last 15 months.

The Environmental Mining Development Ministry emphasized that the tons of gold that were allegedly produced by organized small-scale miners used clean technologies:

“This delivery of gold … was accomplished thanks to the commitment made by the traditional workers of El Callao and the [Ministry] to work together to boost gold exploration, exploitation, and commercialization of gold, in compliance with the laws established by the national government, where the conservation of the environment plays a crucial role.”

But miners say that this is not true. (See: Miners Say They’re Still Using Poison)

Credit: William Urdaneta At Molinos Calderón in the village of La Ramona of El Callao sector, a miner displays gold on a 50-bolivar bill. Gold is used as currency in towns in southern Bolivar state.

Most of the production attributed to the Socialist Mining Brigades relies on artisanal miners working in the Orinoco Mining Arc. While the workers use crude tools and dangerous chemicals, that’s not their only problem.

Vladimir Vegas, a miner in La Ramona, a small town just northwest of the mining center of El Callao, told reporters he is afraid because the new Brigades are under threat from the gold gangs that infest the area. (See: Gang Lords Rule the Orinoco Mining Arc)

“All we want is for the government to help us, to protect us from criminal gangs. One of our partners was killed five months ago,” he says. “They killed him because he stood up and denounced tribute payments and gold trafficking.”

It’s not just the gangs – the state is implicated too.

“It’s no secret that the government’s got its hands in there,” says Alexis Chaurán, spokesman for La Ramona’s Revolutionary Miners and Millers Association. “Generals, heads of all public institutions and, mainly, the Bolívar state police, the most corrupt of all. Everything’s business. We’re victims of the so-called syndicates, which are nothing more than armed gangs.”

Chaurán confirms that the artisanal miners participated in the gold collection mentioned by ministers Mirabal and Arreaza, even before the formal creation of the Socialist Mining Brigades was published in the Official Gazette of Jan. 9, 2017.

“Yes, we worked with the government. We received the gold produced by some miners in the sector and last year, we sold gold to the Central Bank” twice, he says, noting the gold was produced like it’s always been – with mercury. 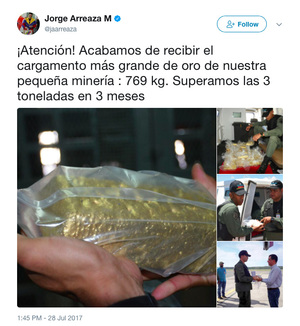 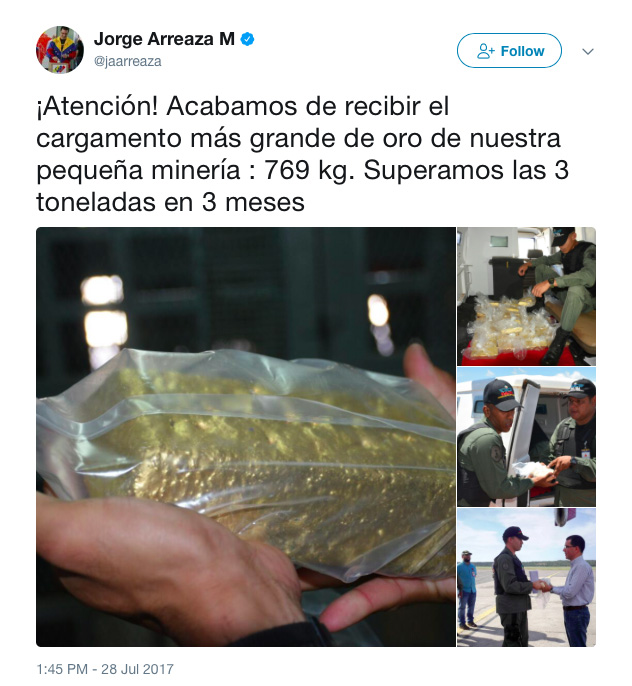 There are no reliable figures on how many people are engaged in small-scale mining and even fewer on how much illegal mining goes on in the area. The government news agency reported in 2016 that the number of small-scale miners could be as high as 40,000.

The chaos of gold extraction in Venezuela was examined in a report released by the Global Initiative against Transnational Organized Crime in April 2016. The document claims that 18 tons of gold were produced in Venezuela in 2013, 16 of which were extracted and sold illegally. This discrepancy with the government’s much lower figures suggests that a large percentage of the country’s mining industry has moved into the shadows – and may account for the dropping official statistics.

Ramón Calderón, a representative of La Ramona’s miners and millers, thinks that the Venezuelan government “has done justice” in its attempt to empower those who have worked in gold extraction at their own risk. But he has reservations concerning the involvement of foreign capital in the Orinoco Mining Arc.

“What we want is to show the state that we can manage our own companies, that there’s no need for foreign investors here. We’ve had terrible experiences with transnational companies before,” says Calderón. La Ramona’s millers justify their resistance with political arguments, questioning the wisdom of Chavez’s policies and indicating that the government’s plans to involve large foreign companies in the mining industry will spur resistance.

“In 2010, we were barred from accessing the mines, particularly those located in Increíble, where we had 60 gullies,” says Chaurán. “The struggle of La Ramona’s miners [forced Chávez to] decree the nationalization of gold and expel foreign companies from the country. They’d been messing with the environment for many years and left us with huge holes in the ground, a horrible deforestation and growing poverty.”

Four men are on trial in Kyiv for allegedly attempting to murdering a Balkan drug lord. Three police officers played a role in the plot, but it’s unclear how much they knew, and none have been charged.

Among the apparent targets of NSO Group’s Pegasus spyware was the biggest nemesis of “Leader of the Nation” Nursultan Nazarbayev — and people surrounding his son-in-law. Also on the list were dozens of loyal government officials.

Politically Active Mexican Teachers May Have Been Targeted for Digital Surveillance

The administration of President Enrique Peña Nieto publicly clashed with Mexico’s 1.4 million teachers in 2013 over his efforts to impose reform on the country’s education system. But the government had a secret weapon.