Israeli courts have convicted the wife of Prime Minister Benjamin Netanyahu of misusing public funds to pay for US$100,000 worth of private meals. 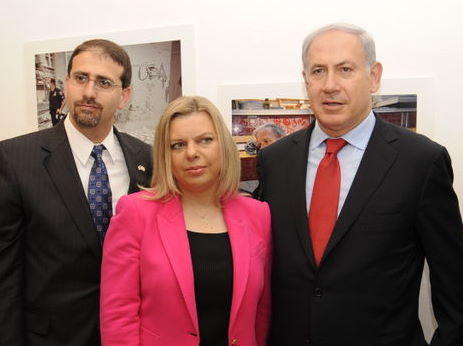 (Sara and Benjamin Netanyahu / Wikimedia Commons)The investigation into Sara Netanyahu was made public in 2015 when police alleged that she had also misused funds to pay for her late father’s nursing care, as well as for furniture and renovations at the couple’s coastal vacation home.

When she was officially charged by state prosecutors for fraud last year, this pertained only to the misuse of funds that were spent on catering for private meals at the couple’s residency.

She had faced a maximum sentence of 8 years in prison but her plea deal on Wednesday reduced the punishment significantly.

The lesser charge of “taking advantage of a mistake” and fraudulently misusing state funds was approved on Sunday.

She will pay a fine of US$15,200, just a small fraction of the sum spent on the private catering. Roughly 80% of this fund will be paid directly back to the state, and the remainder will be paid as a fine.

"I have suffered enough,” Sara said in a short statement in response to the court’s decision.

In a video posted to his official Facebook page, Netanyahu explained that his wife pleaded guilty to avoid prolonged “suffering” that a trial would entail.

“She wanted that hell to end,” he said.

He admonished the charges against his wife, calling them a “strange four-year witch hunt” and added that she would not have been investigated or put on trial if Sara had not been his wife.

An anonymous senior judicial source disputed the Prime Minister’s characterization of his wife’s conviction to Hebrew media, saying that Sara had pleaded guilty because “she knows very well that this was not a case of ‘there will be nothing, because there is nothing.'”

The charges against Sara were one small part of a larger corruption probe into the Prime Minister.

In February, the country’s attorney general recommended indicting him on three separate charges of bribery, fraud, and breach of trust.

Netanyahu had also characterized the charges against him as a “witch-hunt” designed to hurt him during April’s elections, which his party ultimately emerged victorious from.

On May 21, a Member of the Knesset introduced a new immunity bill which, if passed, would clear all corruption charges against the Prime Minister.

Only a few days later, it was announced that Netanyahu had failed to form a government by the six-week deadline, prompting a new round of general elections that will take place on Sept. 17.

The Prime Minister’s pre-trial hearing is set to take place in October, following the rejection of his request to delay it until 2020.