The former head of Interpol, whose disappearance in China last year prompted international concern, is to be prosecuted on charges of bribery, China’s Communist Party announced on Wednesday. 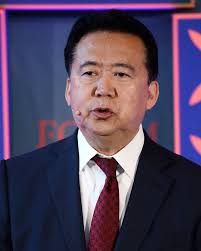 Meng Hongwei (Photo: Diarmuid Greene, CC-BY-2.0)Meng Hongwei, 65, was the president of Interpol when Chinese authorities detained him in September. He stands accused of accepting bribes and using state funds to fund his "extravagant lifestyle".

Meng has been expelled from the party and stripped of all government positions, according to the Central Commission for Discipline Inspection (CCDI).

China has not presented evidence to support the allegations.

Meng was China’s vice-minister of public security until 2016. During his time working for the Communist Party, he oversaw security organisations such as the armed police force and the counterterrorism division.

He was elected Interpol president in November 2016, becoming the first Chinese person to hold the position. Interpol received a resignation letter soon after his disappearance in China, prematurely ending his leadership term that was expected to last until 2020.

The case has focused international attention on the Chinese legal system, with Meng the latest official to fall foul of President Xi Jinping's anti-corruption campaign.

Lu Wei, China's former head of internet censorship, was sentenced to 14 years in prison for bribery on Tuesday.

Meng’s wife, Grace, has applied for asylum in France where Interpol is based, having previously expressed fears for her life after threats against her and her children. Her last communication with her husband was the day he disappeared when he sent her an message containing a knife emoji.

Last week, she urged President Emmanuel Macron to discuss the case with President Xi during an official visit.

The case has been handed over to China’s state prosecutor’s office.