China Cracks Down on ‘Himalayan Viagra’ Used to Bribe Officials

Chinese anti-corruption authorities in the northwest Qinghai province have launched a three-month campaign to crack down on “Himalayan Viagra,” a fungus that is more valuable than gold and is used to bribe officials, the country’s anti-corruption watchdog, the Central Commission for Discipline Inspection (CCDI), said in an online statement. 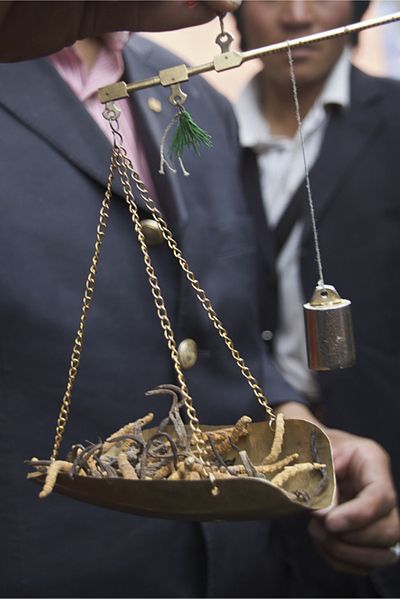 This fungus, thought by many to cure dozens of ailments, including male sexual dysfunction, is worth more than gold. (Photo: Wikipedia, Mario Biondi, CC BY-SA 3.0)The fungus, a genus called Ophiocordyceps sinensis, or simply cordyceps, lives on certain caterpillars in the mountainous regions of China and Tibet and has been used by traditional healers since ancient times, according to a 2011 article published in the Journal of Ayurveda and Integrative Medicine.

It is thought to cure dozens of ailments, but it is mostly used to treat kidney disorders and male sexual problems.

There remains, however, significant scientific debate as to its medical powers. According to an article in the Journal of Traditional and Complementary Medicine, scientists are still unable to cultivate cordyceps in a lab, rendering its biology “a secret” and “its commercial cultivation still a dream.”

Growing only in wild, remote regions, the fungus fetches a heavy price. A cordyceps dealer told the Hong-Kong based South China Morning Post that he sells the fungus for US$47 (HK$370) per gram, about $5 more per gram than gold.

The expensive fungus, sometimes referred to as “soft gold” in reference to its price, has been used for years to bribe officials in Qinghai province, but the Chinese government’s new initiative may see arrests of those who “us[e] the special products and resources within the jurisdiction to seek personal gain and profit transfer,” the CCDI’s statement said.

Although the campaign marks a significant step in the fight against corruption, cordyceps has been the downfall of some Chinese officials for years.

A former deputy secretary of the Guangdong Provincial Discipline Inspection Commission was found with more than 440 lbs of cordyceps in his home in 2015, a stash worth $9.4 million in today’s money. The man, Zhong Shijian, was found guilty of bribery and sentenced to fifteen and a half years in prison.

Another man, a former party chief of the state-owned Assets Supervision and Administration in Dongguan, Guangdong Province, was sentenced to five years in prison for accepting bribes worth $520,000. In his testimony, Liang Jianxin admitted he spent most of the money on cordyceps to treat high blood pressure and diabetes caused by excessive alcohol consumption.

The fungus also appears to be a new favorite among the foodie community. The Guardian recently published an article on the growing popularity of fungi in coffee drinks, energy bars and other snacks that mentioned cordyceps sinensis.