In Troika’s Wake, Some Action, Some Waffling 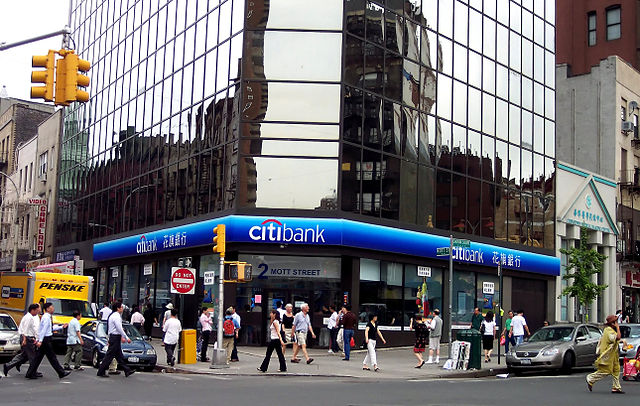 A Citibank branch in New York (CC 3.0) “RBI complies with all anti-money laundering requirements. Its compliance systems and processes have been, and continue to be, regularly reviewed by external parties and are confirmed to be in compliance with the legal requirements,” wrote Raiffeisen bank in a statement to OCCRP, responding to an inquiry about how it intends to address evidence of its entanglement in the scandal.

“Nevertheless RBI takes the allegations in the media very seriously and is conducting an internal investigation.”

As a response to the investigation, shares of a number of European banks tumbled in the days following the publication.

Vitas Vasiliauskas, the head of Lithuania's central bank, said on Friday that the revelations were a serious blow to the reputation of Lithuania’s financial system and that the Nordic countries should together address the problem.

“No doubt I believe that the reputation of jurisdiction is touched and will be touched. It will take time for you to actually smell all that smoke,” he said.

But he emphasized that the Lithuanian bank which hosted the accounts of the 75 shell companies, Ukios Bankas, was not a worthy subject of investigation--as it was closed in 2013--instead saying the investigation should be pointed at Swedbank and other entities.

“We have been alienated all the time, and you know, as I say, sometimes the Baltic states are mixed with the Balkans,” he added.

The Troika Laundromat investigation comes after years of revelations of illicit Russian cash making its way into European banks--including through three other massive laundromats.

It reveals how a complex network of 75 shell companies managed to move billions of dollars of money belonging to wealthy Russians, including prominent politicians, into major Western banks. The money bought lucrative properties in Spain and Vienna, chartered jets and yachts, and may have made its way into a charity run by the Prince of Wales.

Hermitage Capital Management, led by prominent Kremlin critic Bill Browder, filed a complaint to Austrian prosecutors about Raiffeisen Bank, alleging that the bank played a significant role in the scandal and saying that some of the transactions “should have raised immediate red flags and reporting of money laundering suspicion by Austrian bank employees.”

Spanish authorities started to investigate four lucrative properties allegedly bought with the laundered money off of Costa Brava, whose cost ran to $14 million.

Some others were less clear on whether action was needed.

New York-based Citigroup, whose shares dropped four percent over the week, declined to comment on the reporting itself.

“We continually take steps to strengthen and enhance our program in order to anticipate and respond to the changing patterns of criminal behavior and protect the financial system,” Citigroup said.

A spokesman for Prince Charles told the BBC that the Prince was not involved in the day-to-day operation of his charity which allegedly received some US$202,000 of the money.

Russian officials largely dismissed the revelations, according to Moscow Times.

“We have fiscal departments and financial intelligence [agencies] that have all the needed powers to monitor the financial activities of the institutions in this sector of the economy,”  Putin’s spokesman Dmitry Peskov told RBC.