Three years ago, OCCRP exposed the “Russian Laundromat” - an immense financial fraud scheme that enabled vast sums to be pumped out of Russia. The money was laundered and moved into Europe and beyond through bribery and a clever exploitation of the Moldovan legal system.

Recently, OCCRP and Novaya Gazeta obtained detailed banking records for more than 120 accounts that made up the Laundromat. We shared the data with dozens of reporters from around the world who tracked down the money locally. The results are "The Russian Laundromat Exposed" - a new project which reveals far more about how the scheme worked and where the money went. The stories below explain how more than $20.8 billion was taken out of Russia and laundered, who got the money, and why some of the world’s largest banks failed to shut the scheme down. 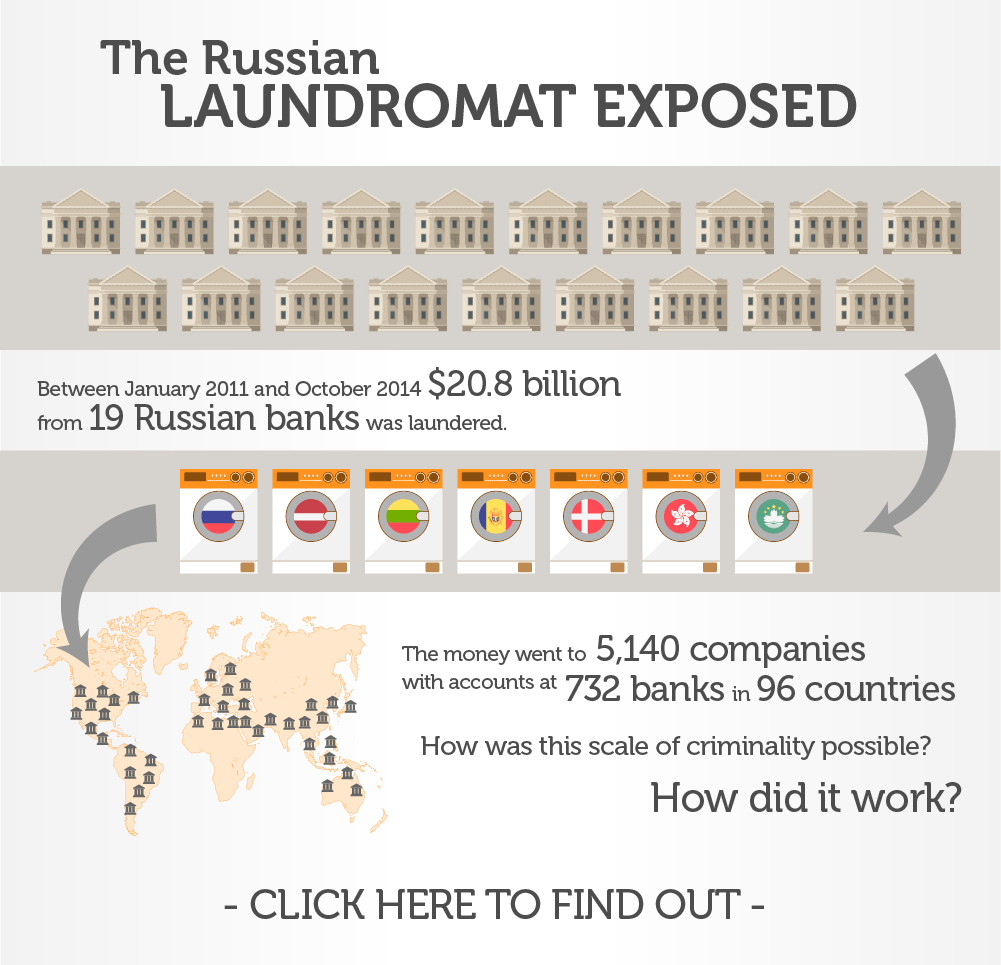 The daughter of a top Moldovan judge lived large in London thanks to 1.6 million lei (US$ 130,000) that was channeled through two companies involved in the Russian Laundromat -- a massive money laundering scheme that pumped billions of dollars through Moldova from Russia.

Three years after the “Laundromat” was exposed as a criminal financial vehicle to move vast sums of money out of Russia, journalists now know how the complex scheme worked -- including who ended up with the $20.8 billion and how, despite warnings, banks failed for years to shut it down.

The Russian Laundromat: The World Responds

Russia’s dirty laundry has been put out to dry by investigative reporters working together across 32 countries in a major project led by the Organized Crime and Corruption Reporting Project (OCCRP) and Moscow-based Novaya Gazeta.

Tiny Moldova, sandwiched between Romania and Ukraine, was deluged by a financial tsunami. For four years starting in 2011, secretive Russian companies poured more than $20 billion into just a single bank in the republic -- more than double the country’s GDP.

Maija Treija is director of compliance control for the Latvian Financial and Capital Market Commission (FCMC) which regulates the country’s banking system. She spoke recently with the Finnish Broadcasting Company (YLE) about Latvia’s efforts to rein in its notorious banks, which played key roles in two of the biggest financial scandals in Eastern Europe: the $20 billion Russian Laundromat money-laundering ring and the still-unsolved theft of $1 billion from Moldovan banks. She sidestepped questions about whether Finnish banks should have asked more about the $26 million that flowed through them to destinations unknown.

How Veaceslav Platon’s High Life in Kyiv Came Crashing Down

In the Republic of Moldova, they call it the “Theft of the Century.” In 2014, $1 billion was drained from three banks in Europe’s poorest country into a web of secretive offshore companies.

The Russian Laundromat was a money-laundering platform, which provided specialized services for various “clients”. One of the main techniques in aspects of money laundering is devising a way to pool together streams of money originating from various the mixture of money, which originates from different dubious sources.

Behind the superstructure of banks, courts, and businesses real and fake that comprised the Laundromat are three Russian businessmen whose firms took in enormous sums -- Alexey Krapivin, Georgy Gens, and Sergy Girdin.

After its work on the 2014 series on the Russian Laundromat, the biggest known money laundering operation in Eastern Europe, a source provided OCCRP and Novaya Gazeta with banking records used by the offshore companies that comprised the operation.

Where did the money go?

More startling cases reveal the involvement of big Danish banks, according to American and Italian authorities.

The former head of the Estonian branch of Danske bank, Aivar Rehe, says he did not know anything about transactions from Moldova and that this story sounds very illogical.

What Regulators Do When the Russians Launder Millions

15 million Euros poured into Slovenia right past the Office for Money Laundering Prevention, which detects any transfer above €15,000.

The case of the laundered billions once again sheds critical light on Nordea's explanations in the wake of last year's Panama Papers scandal.

Shipping Brokers With No Agents and No Ships

Among the four biggest recipients of money from the Laundromat with Slovenian bank accounts are two shipping companies registered in Cyprus.

The lion's share of the $1.6 billion of Russian money laundered through Estonian banks came straight from a suspicious Moldovan bank.

A video about Samsung’s role in the Russian Laundromat with English subtitles.

Barron’s presents a detailed examination of what Eastern European authorities claim is questionable money leaving the Russian Federation to fund payments around the world.

A Factory for the Chechen President From the Laundromat

Omnia Arhing got €5.2 million on its NLB bank account. The company’s head got certificates of honor from Kadyrov.

A story focused on funds received through Laundromat by Samsung’s European subsidiary.

Banks in Estonia were used to move nearly $1.6 billion of criminal funds from Russia, OCCRP uncovered with help from Postimees and Novaya Gazeta.

What started in Moscow stopped in Gänserndorf. The money flowed in 16 tranches to the Lower Austrian municipality just an hour from Vienna...

The story has all the ingredients of an exciting movie. Swiss bank accounts full of millions destined for fur coats, jewelry and even pop concerts…

The three major Swedish banks, Handelsbanken, Swedbank, and particularly SEB, as well as the major Norwegian bank DNB, received bank transfers in a large-scale case of money laundering from Moldova. Handelsbanken was "aware" of suspicious transfers and cut off cooperation with the participating Latvian bank.

The Role of German Banks in the Russian Laundromat

For a long time, Deutsche Bank, Commerzbank, and others accepted questionable transfers from Eastern Europe…

Most of the Laundered Millions Came to Accounts of NLB Bank

A Matrioshka of Bentleys

The arrow on the speedometer of the opulent Bentley points to 250 km/hr..

In cooperation with the media throughout the world, Berlingske investigated where the money came from…

Millions from Laundromat for the Shor Group

The Era of Leaked Data

Almost exactly a year after the disclosure of the Panama Papers, journalists have once again uncovered…

Switzerland as a Hub

Video: How the Laundromat Works

To hide its origin, the alleged black money is shoved across Europe…

Billions of dollars were moved out of Russia in ‘Global Laundromat’ operation, with anonymously owned UK companies playing major role…

It all began with a different story…

This is how the Russian Laundromat Works

More than €19 billion were shipped across the world through an ingenious network of "mailbox companies” from Russia. We will show you how.

The Brotherhood of Financial Laundromats from Russia

The Czech banks are pulling money from Russian sources, and they’re doing it in style…

The Czech Link in the Russian Laundromat

How to Steal 20 Billion

A series of stories about the Russian Laundromat’s reach into the Baltics - with a focus on the banks involved.

Offshore companies, government money laundering investigations, and hundreds of companies around the world allegedly not aware of those who sends them money…

No money? Here you go.

700 billion rubles were taken out of the country. Novaya Gazeta answers the question of who got this enormous sum.

The bank theft was so outsized and bold that citizens of the Republic of Moldova came out in the streets this past May by the thousands to protest: “We want our billion back!”

The Russian Laundromat, a large multi-billion money laundering machine uncovered last year by the Organized Crime and Corruption Reporting Project (OCCRP), used the services of several residents of a small town near Kyiv.

When US$ 20 billion in dirty money swirled out of Russia and into Europe in one of the biggest money laundering operations yet uncovered in Eastern Europe, investigators in Moldova and Russia set to work to track down how it was done and who was behind it.

It may be the biggest money-laundering operation in Eastern Europe -- a virtual laundromat operating through banks and companies connected to powerful people in the region.

The Russian Banks and Putin's Cousin

The Laundry Cycle, From Start To Finish

Ruslan Milchenko, formerly with the Russian police, today heads the anti-corruption agency Analitika and Bezopasnost (Analyses and Security) and knows all about Moscow-style money laundering.

The $20 Billion Bank in the Country of the Poor

Law enforcement reports obtained by OCCRP indicate that one of the oldest and biggest banks in the Republic of Moldova, Moldindconbank, has been used in the biggest money laundering operation in Eastern Europe in recent years.

Banking records obtained by the Organized Crime and Corruption Reporting Project (OCCRP) indicate that the Latvian bank Trasta Komercbanka was the final destination for billions of dollars that left Russia in a massive money laundering scheme.