Jesus Eugenio Ramos Rodriguez has become the second journalist to be murdered in Mexico so far this year, after he was shot while having breakfast on Saturday morning. 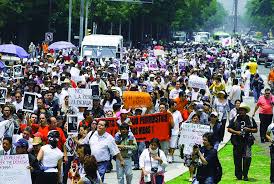 Journalists protest against rising violence in Mexico, 2010 (Photo: Knight Foundation, CC BY-SA 2.0)Fellow journalist and Coordinator of Social Communication for the President’s Office, Jesus Ramirez Cuevas condemned the murder on twitter and announced that the government will “strengthen the protection measures for human rights defenders and journalists.”

“Freedom of expression is a right and fundamental element for democracy, justice and freedom,” said Ramirez.

The Governor of the state of Tabasco, where Rodriguez was murdered, also made the announcement that local legislators are working on the creation of a Law for the Protection of Journalists, according to Mexican media.

Local media interviewed witnesses to the shooting, who said that more than eight bullets hit Rodriguez at point blank range. The attacker had, after exiting a vehicle, headed straight towards Rodriguez while he was having breakfast with a local Morena (ruling party) leader and a former mayor.

While the motive for the murder is not yet known, Rodriguez was the host of a popular radio show that aired twice daily.

A few weeks earlier, on January 20, journalist Rafael Murua was discovered in ditch after having been reported missing. Murua had been in a government protection program for journalists and rights activists since 2016, after he had received death threats.

Local media noted that, in his work, he was critical of the municipal president of Mulege Felipe Prado.

A 2018 Reporters Without Borders report found Mexico to be the deadliest country for journalists which was not at war. Covering political corruption and organized crime makes journalists a target in the country, said the body.

Murders in Mexico have increased in recent years, with more than 33,000 recorded last year – a decade after the start of a military-led campaign to battle drug trafficking.