Police in Spain recovered hundreds of looted archaeological items, including a prehistoric ax mold and a medieval seal, that were stolen from sites in the Tietar Valley more than three decades ago, authorities announced Wednesday. 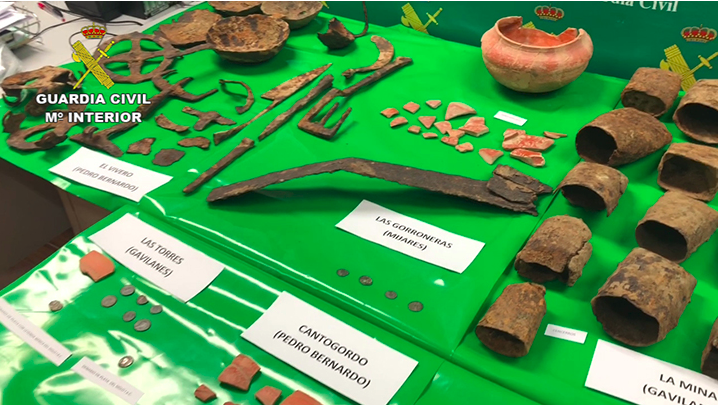 Police uncovered a total of 257 artifacts. (Source: Guardia Civil)In addition to great historic value, the Spanish Civil Guard said the 257 antiquities, which span from prehistory to the 15th century, are worth an estimated US$350,000.

The operation, named “Fibulas,” began last April after authorities received a report from the Junta of Castilla and Leon, the governing body of the autonomous Spanish community where the items were retrieved from a city council office in the province of Avila.

The main suspect of the investigation had been studying the objects without authorization, and then publishing his findings in several specialized archaeology journals in order to gain recognition in the field.

The recovered items included one stone ax mold and one flint arrowhead from prehistory; one bronze and one silver Iberian coin from the first century; 124 Roman coins, 70 metallic and lithic objects, and 58 pieces of ceramic pottery from the first to the fourth centuries; and one medieval seal from the 15th century.

Over the course of the operation, police found that the suspect had examined more than 8,000 artifacts stolen from sites in Avila, Soria, and Guadalajara between the 1980s and 1990s, which have all since been given to the Museum of Avila.

The Civil Guard says the newly recovered items will also be given to the museum.