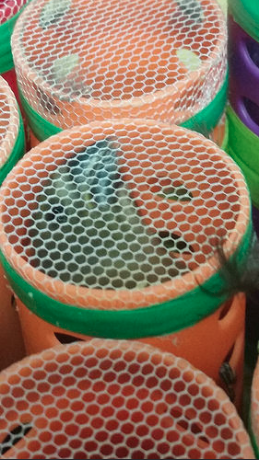 Smuggled Finches seized from a New York airport in 2017 (Source: flickr)Customs authorities say they seized 70 finches from a passenger arriving from Georgetown, Guyana, on Saturday. The birds were “detained under quarantine” and turned over to the Department of Agriculture Veterinary Services.

Finding the tiny songbirds - often in hair rollers, but sometimes in socks or toilet paper tubes - has become a somewhat unremarkable experience for New York customs officials. So far this year, the New York Times reports that agents have seized nearly 200 finches, who are usually sedated and in the luggage of passengers coming from South America.

The smuggled finches are used primarily for gambling purposes, according to the Times. Gamblers set the birds against each other in underground singing contests and place bets on which bird will chirp the loudest or how many times it will chirp in a minute.

Finches can be bought for around US$20 in US pet stores, but a winning male finch with a good track record on the black market can sell for up to $10,000.

“The most common animal we see trying to be smuggled through the passenger environment are these birds, the finches,” Anthony Bucci, a spokesman for CBP in New York, told the Times. “It’s not an everyday occurrence or an every month occurrence, but it does happen.”

It is legal to travel with pet birds in the US or import them for commercial use, so long as passengers follow proper protocols to ensure health and safety.

“CBP Agriculture Specialists are the first line of defense to prevent the introduction of animal diseases that have the potential to cause significant damage to the Nation’s agricultural economy,” said Troy Miller, director of field operations of CBP’s New York office.

The passenger from Guyana, whose name was not released, was barred from entering the country on Saturday, according to the Washington Post, but was allowed to withdraw his application for entry so that he may re-apply to visit in the future.

There are penalties for smuggling birds into the US, primarily fines, but authorities said there were no further punishments applied in Saturday’s case.