Following a series of scandals, ranging from fraud and bribery to illegal betting and doping, more than 100 government ministers, experts, and leaders of international sports organizations met in London on Thursday to affirm a global commitment to tackling corruption in sport. 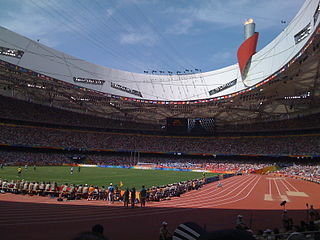 Inside the Beijing National Stadium during the 2008 Summer Olympics (Tom Nguyen, CC BY 2.0)Delegates at the International Partnership Against Corruption in Sport (IPACS) gathered to discuss strategies to manage conflicts of interest in awarding major sporting events, and how to develop tools to battle corruption in procurement processes.

“Today’s event is another important step in the ongoing fight to eliminate corruption from sport,” said Jeremy Wright, secretary of state for the UK Department of Digital, Culture, Media and Sport.

“Every fan and athlete should have faith that contracts are fairly awarded, events are given to the strongest bid and the highest standards of governance are being upheld.”

Launched last year at the International Olympic Committee's (IOC) forum for sports integrity, IPACS’s mission is to bring together governments, international sports organizations, and relevant stakeholders to tackle corruption and promote a “culture of good governance” in sport.

“We know we cannot win this fight alone, but need the support of governments when it comes to anti-corruption legislation and law enforcement.”

Attendees of the three-day summit included representatives from the Beijing 2022 Winter Olympics, the British Olympic Association, Interpol, and the Commonwealth Games Federation.

It was coordinated by a Core Group of partners including the Council of Europe, the IOC, the Organisation for Economic Development and Cooperation, the UK Government, and the UN Office on Drugs and Crime.