The European Commission castigated Romania for regressing in its anti-graft reforms, but generally praised Bulgaria for meeting its commitments in two separate annual reports on the administration of justice released Tuesday. 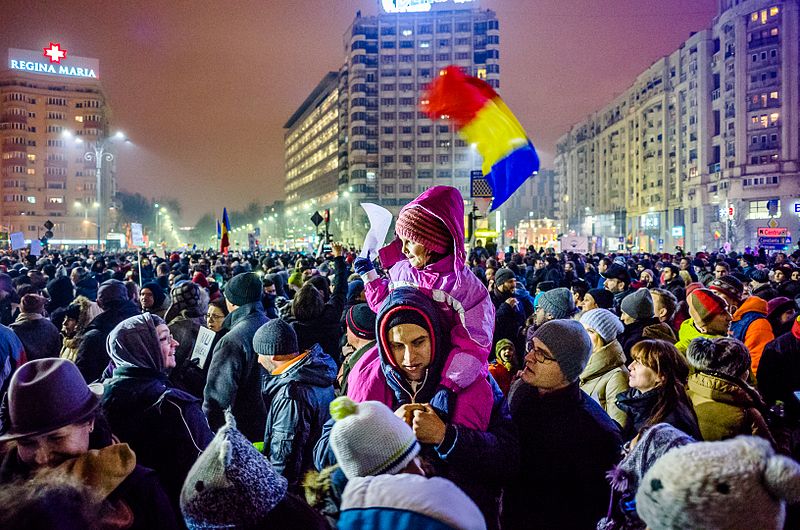 Anti-corruption protests in Bucharest, Romania, 2017. (Photo: Wikipedia, CC BY-SA 4.0)When they acceded to the European Union in 2007, both Eastern European nations were required to sign up to the Cooperation and Verification Mechanism (CVM), a program that establishes specific benchmarks for reforms and monitors their implementation.

The countries will remain under supervision until numerous requirements encompassing judicial reforms and anti-corruption measures are met to the Commission’s satisfaction.

“I regret that Romania has not only stalled its reform process, but also re-opened and backtracked on issues where progress was made over the past 10 years,” Commission First Vice President Frans Timmermans lamented.

In particular, the report cited “pressure on judicial independence and on the National Anti-Corruption Directorate (DNA) in particular.” The Commission condemned early this year controversial changes to the criminal code that overhauled abuse-of-power legislation. In August tens of thousands took to the streets of Bucharest in anti-government protests that quickly turned violent.

The status of the DNA, the anti-graft investigative body, is also uncertain. This July, President Klaus Iohannis bowed to pressure and fired the agency’s chief prosecutor in compliance with a Constitutional Court ruling supported by the ruling Social Democratic Party (PSD).

Romania is set to take over the EU’s rotating presidency for six months starting in January, but even the country’s own president says the nation is not ready.

“Things have gone off the rails,” Iohannis told the Associated Press on Monday. “It’s the 12th hour (and) we are totally unprepared...There’s no chance of a good government...or proper involvement in European affairs.”

The European Commission thinks corruption is so rampant in Romania, in fact, that it added eight additional recommendations, saying in Tuesday’s report that the original 12 set out in January 2017 are “no longer sufficient.”

By contrast, the Commission commended Bulgaria for its recent progress in areas of justice and transparency.

The report praised the country’s “determination” to implement the CVM reforms, with Timmermans saying, “If the current positive trend continues and progress is maintained sustainably and irreversibly, I am confident that the CVM process for Bulgaria can be concluded before the end of this Commission's mandate.”

Still, the Commission said that Bulgaria must “develop a track record of concrete results” and that “transparent reporting” by authorities is crucial to completing the CVM process.

However, the report additionally noted a “significant deterioration in the Bulgarian media environment” which the Commission fears could restrict public access to information and “have a negative impact on judicial independence.”

Back in September, two OCCRP-affiliated journalists were detained by armed Bulgarian police for more than seven hours after they had received a tip that crucial documents related to an ongoing investigation known as the “GP scandal” were being burned in a field.

Late last month Bulgarian television journalist Viktoria Marinova was brutally raped and murdered in the city of Ruse. She was also investigating the so-called “GP scandal,” which alleges the Bulgarian government is handing out state contracts at inflated rates and paying large commission to mayors, deputy ministers, and top officials in construction and agriculture agencies.

Police, however, still maintain that Marinova’s murder was unconnected to her profession.

These disturbing trends in Romania and Bulgaria come at a pivotal moment in European history in which the relevancy and efficacy of the European Union has been thrown into doubt as the United Kingdom prepares to exit the bloc and far-right populism rages in Poland, Hungary and beyond.

A new study published this week by the German Economic Institute, a Cologne-based think tank, seeks to explain why Eastern Europeans’ faith in EU-style democracy has declined in the past decade.

The answer, say the authors of the report, is corruption, which has doubled in Eastern Europe over the same period.

“Democracy and corruption are complementary institutions,” the report says, and “increased experiences of corruption in these states undermine the support for democracy.”

How, then, can post-Communist states like Romania and Bulgaria achieve full democracy and accede to the EU? Get rid of corruption.

“Only in the absence of corruption can the experience of democracy have its full effect on pro-democratic attitudes,” the authors conclude.