Chinese demand for luxury timber is driving logging in the Solomon Islands at an unsustainable rate, and may see them stripped of forest by 2036, according to a new report by Global Witness. 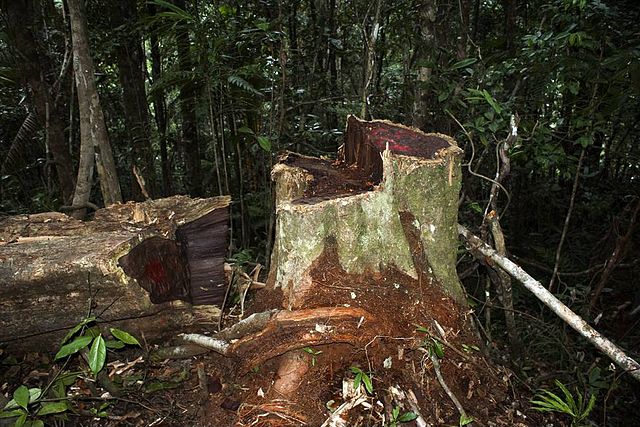 A stump of illegally logged rosewood (CC 3.0)“The level of unsustainable harvesting is such that it is estimated that all natural forests in the country that are accessible to logging companies--i.e. not on a steep mountainside--will soon be commercially exhausted,” it says.

The result is that enough timber to completely fill Beijing’s Bird’s Nest stadium, the world’s largest enclosed structure, makes its way to China from the Solomon Islands each year.

The report estimates that the Solomon Islands exported 3 million cubic meters of wood in 2017, about 19 times more than their estimated sustainable harvest. China imports 82 percent of these logs.

Referencing new data from the Solomon Islands’ Ministry of Finance, it finds that timber on the island chain will be utterly gone by 2036 if logging continues at its current pace--and that even if this rate were halved, timber would be gone from the by islands in 2046.

Much of this timber is illegal, says the report, with loggers felling timber outside of concessions and on private land without receiving approval of landowners.

It adds that though the country has instituted Timber Rights Hearings to allow landowners to decide who logs their land and how, Transparency International finds that “the whole process of Timber Right[s Hearings] is usually corrupted.

“The risks of illegality are high enough that without extensive site visits, European and American importers are unlikely to be able to satisfy their legal due diligence requirements,” says the report.

China, the global destination of one-third of the world’s tropical logs, has not yet taken steps to scrub illegally-sourced or unsustainable raw materials from its supply chains.