The day before his wife was arrested over her ties to a scandal that saw some US$4.5 billion dollars looted from a state investment fund, beleaguered Malaysian Prime Minister Najib Razak went on Facebook to vent his frustration about how everyone makes everything his fault. 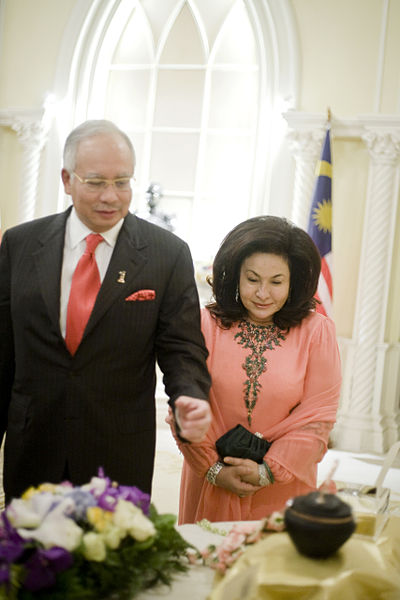 Najib said these were “gifts” to Rosmah and their daughter.

“There are all sorts of wild accusations lately. It is easy for everyone to use the phrase 'it is all Najib's fault.

“Prices did not go down? Najib's fault.

“If it rains tomorrow and you're late for work? Najib's fault," he wrote in the post on Tuesday evening.

Najib himself was arrested just two weeks ago after being slapped with four charges of abuse of power and twenty one charges of money laundering for his role in the 1MDB scandal, in which senior Malaysian officials are alleged to have siphoned millions of dollars from a fund that was set up in 2009 to attract foreign investment.

His Facebook post came shortly after it was alleged that he had offered $1.16 million to a man charged with killing a Malaysian anti-corruption prosecutor--in exchange for him pleading guilty to the murder.

News reports say that the anti-corruption prosecutor, Kevin Morais, was killed after he became involved in the investigation of the 1MDB scandal, potentially implicating Najib in the murder.

Najib called this “slander.” He maintains that he is innocent of the abuse of power and money laundering charges.

"It is illogical that Kevin Morais was made a victim but many more who investigated the case are still alive, no?" he said.

The US Department of Justice estimates that about $4.5 billion was looted from the 1MDB fund between 2009 and 2014. Its forfeiture list gives a snapshot of how the money--intended for Malaysia’s development--was spent.

The list includes a $250 million yacht with a helipad, a pink diamond pendant and the movie rights to a film called “Daddy’s Home.”