Mexico’s “Worst Governor in History” Gets Nine Years for Corruption

A Mexican court Wednesday sentenced a former Mexico governor who once lead the embattled state of Veracruz to nine years in prison and fined him US$3,100 after he pleaded guilty to criminal association and money laundering charges, the Guardian reported. 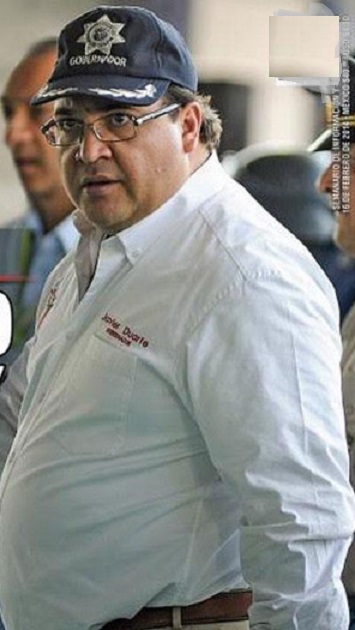 When he was elected governor in 2010, he won upwards of 1.39 million votes, the most of any candidate in the history of Veracruz.

Soon, though, it became clear that the new governor was not exactly a standard bearer in the fight against corruption in Mexico. Numerous investigations such as one conducted by the digital media group Animal Politico found that tens of millions of dollars had been funneled into shell companies controlled by Duarte and his friends over the years.

A 2017 report by the International Crisis Group (ICG) says that since 2010, 11 governors of Veracruz have been investigated for corruption, “amounting to an estimated total of $15 billion of allegedly embezzled funds.”

A staggering 94.6 percent of the total crimes in Veracruz go unreported.

Over a dozen journalists were killed during Duarte’s reign over Veracruz, a battleground region where one man, the son of a slain reporter, remarked “it’s easy to kill a journalist.”

“He was the worst governor in the history of Veracruz - and we’ve had bad governors,” Noé Zavaleta, the Veracruz correspondent for the newsweekly Proceso, told the Guardian this week.

Mexico’s ruling Institutional Revolutionary Party (PRI) - to which Duarte belonged until he was stripped of his party rights - lost the June 2016 gubernatorial election in Veracruz for the first time.

Andres Manuel Lopez Obrador of the National Regeneration Movement won the presidency, bringing an end to the reign of the PRI, which had governed Mexico for 77 of the past 89 years.

Facing federal corruption allegations in October 2016, Duarte stepped down two months before his term ended. He denied all allegations of embezzlement and diversion of government funds abroad.

In December of that year, a police raid of his ranch turned up scores of artworks, including 17 paintings by famous artists such as Joan Miro, Fernando Botero and Leonora Carrington.

His ranch outside the city of Cordoba in north-eastern Veracruz, allegedly paid for with public money, boasted 25 rooms, a helicopter landing pad, and two tennis courts.

Duarte subsequently fled the country in a government helicopter, but was tracked down after a six-month manhunt in the Guatemalan town of Panajachel, 140 kilometers west of Guatemala City. He was arrested on an Interpol warrant and extradited back to Mexico to stand trial.

His wife, however, reportedly continues to live a life of luxury in a “superb” apartment in the affluent Central London district of Belgravia with the couple’s three children.

The reaction in Mexico to this week’s ruling was one of frustration and anger, as critics complained Duarte’s prison sentence was too lenient.

“Once again the justice system is mocking society,” Zavaleta, the correspondent, protested. “Behind all this money laundering and illicit enrichment are dismantled hospitals in Veracruz, unpaid scholarships, pensioners who died because they couldn’t pay for their medicines, the 3,600 disappeared persons because we lived in a state of anarchy.”

“Duarte got off easily, without doubt,” said Luis Pérez de Acha, a lawyer in Mexico City. “In terms of prison and his wealth? Very easily.”

Despite the outgoing president Enrique Pena Nieto’s dismal 18 percent approval rating and the fact that Duarte was ousted from the PRI two years ago, the ex-governor maintained an unswerving allegiance to his party at his Wednesday sentencing.

“I am still a soldier of the president; I am loyal to him,” he said.