Slovakian police arrested Thursday eight people in connection with the brutal murder of a local journalist who was shot dead at close range in his home in February while investigating the infiltration of the Italian mob into his home country. 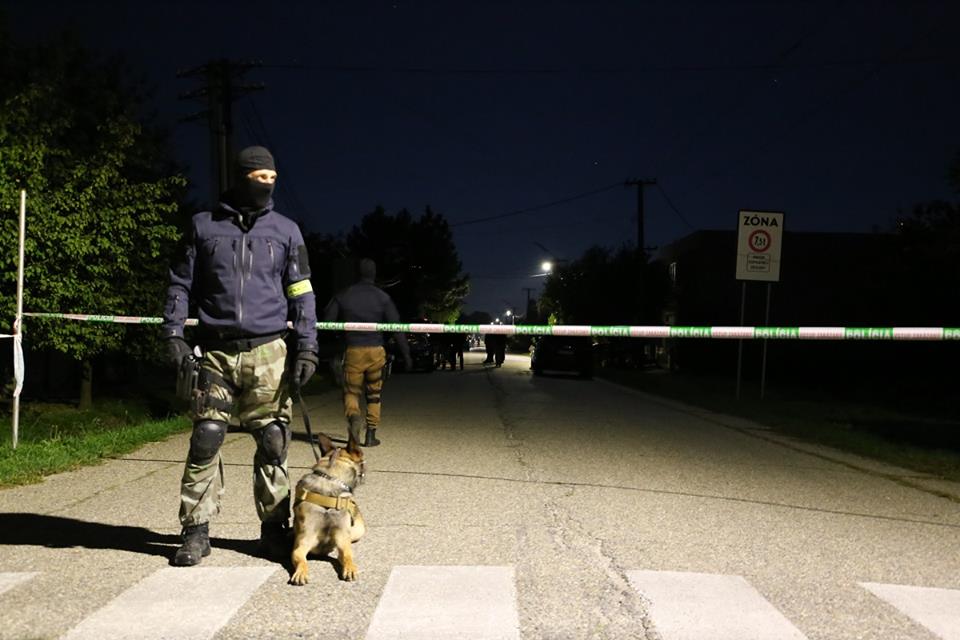 A policeman on a street in Kolarovo, Slovakia, on the day of the arrests (Photo: Facebook, Slovakian Police Department)The news came from a Facebook post published early Thursday morning by the Slovakian police, which said only that officers “apprehended suspects suspected of violent crime” and that “House searches and other procedural operations are currently underway.”

Later in the day, the Kuciak family lawyer, Daniel Lipsic, confirmed on his Facebook page that the arrests were made for the reporter’s murder.

Prime Minister Peter Pellegrini posted on Facebook that “Police have arrested the suspects in the murder of two innocent young people,” adding that the ongoing investigation was “a priority” for his government.

Jan Kuciak was an OCCRP-affiliated investigative journalist who at the time of his assassination was working on a joint investigation between the Slovakian news outlet Aktuality.sk and the OCCRP into the Italian ‘Ndrangheta, one of the world’s most powerful and fearsome crime syndicates, and their growing presence in Slovakia. His final investigative work was published posthumously.

Kuciak and his fiancee, Martina Kusnirova, both 27, were murdered in their home in the village of Velka Maca, east of Bratislava, on the evening of February 21.

Kuciak was the first journalist killed since the country gained its independence in 1993.

Thousands took to the streets in March to show solidarity with the slain reporter and to protest what they perceived as a botched investigation of his murder.

The protests sparked a political crisis in Slovakia that eventually led to the resignation of numerous top-level officials, including the prime minister, the interior minister, and the police chief.

It appeared as if Slovakian police had little interest over the past seven months in solving the murders, sometimes displaying open hostility to those who sought justice.

Pavla Holcova, an investigative reporter from OCCRP partner Czech Center for Investigative Reporting and a friend of Kuciak’s, was invited in May to a “friendly meeting” by Slovakia’s National Crime Agency that quickly soured. Authorities temporarily seized her phone and kept her in an interrogation room for eight hours, seeming more interested in her activity after Kuciak’s murder than in solving the crime.

But after Thursday’s arrest, police posted a photograph on their Facebook page of a cabinet filled with files they claimed were about the Kuciak case. The files, they said, represented “endless hours of work” and “overtime at the expense” of their families, adding that murders are solved within hours only in movies.

“I reiterate that the proper investigation of the murder case of Jan Kuciak and his fiance Martina Kusnirova was and still is my top priority as Interior Minister,” Denise Sakova, the Interior Minister of Slovakia, said in a statement.

Lipsic, the family lawyer, told the daily newspaper SME on Thursday he believed there is enough evidence to keep the suspects detained. He told Reuters in a text message that he had already been briefed by prosecutors.

The arrests were made in the village of Kolarovo, in southern Slovakia, by the National Crime Agency (NAKA).

Authorities have not identified any of the suspects but Slovak media identified a man named Tomas Sz. as one of the detainees.

Serbian investigative reporters determined the man’s name is Tomas Szabo and that he worked previously as a police investigator and received training as a private bodyguard at the European Security Academy, which Bellingcat reported last month also trained members of Ukrainian far-right organizations, including the Azov Battalion.

His Facebook profile shows that between Kuciak’s murder and Thursday’s arrest, Szabo took trips to Serbia and Comoros, an archipelago in the Indian Ocean off the eastern coast of Africa. He appears to be a lover of motorcycles and a martial artist.

Another detainee is Szabo’s cousin.

Zlatica Kusnirova, the mother of Martina, spoke to SME following the arrests. “I’m in shock, I have no further information,” she said.

“I know it won’t bring our children back to life, but I wish for justice to be served,” she added. “I hope the police will detain not only the executioners, but the ordering parties as well.”