Former Arkansas State Senator Jonathan E. Woods was sentenced on Wednesday to 18 years and four months in prison for organizing and leading a bribery scheme, The US Justice Department announced. 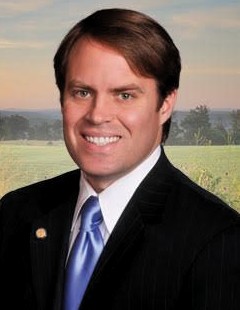 Jonathan E. Woods (Photo: Facebook)He was found guilty of 15 counts, including conspiracy and money laundering. He accepted kickbacks and with associate Randall Shelton covered this up by funneling the money through his consulting company.

Woods was also sentenced to three years of supervised release and ordered to pay more than US$ 1.6 million in restitution to the state of Arkansas and to two economic development districts.

he used his senatorial position to appropriate and direct General Improvement Funds to two non-profit entities. He authorized disbursement of the money and advised other Arkansas legislators to contribute improvement funds to the non-profits.

Wood and others directed the Northwest Arkansas Economic Development District, which was responsible for disbursing the improvement funds, to award about $600,000 to the two non-profits.

Evidence showed that Woods and another former State Representative Micah Neal got back money  from officials at those two organizations.

Woods initially facilitated $200,000 of GIF money to the college and later, together with Neal, directed another $200,000 to the college, all in exchange for kickbacks.  To pay and conceal the kickbacks, Paris paid a consulting company controlled by Shelton with some of the money.

Shelton then kept a portion of the money and paid the rest to Woods and Neal.  Shelton found also guilty, and sentenced Thursday to six years in prison.