A South Korean court found former President Park Guen-Hye guilty of bribery, coercion and power abuse and sent her behind bars for 24 years in a landmark ruling meant to send a message to future leaders, CNN reported Friday. 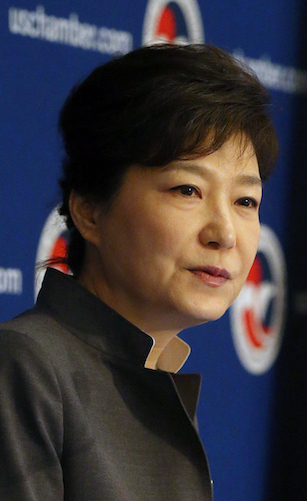 Former South Korean President Park Geun-hye (Photo: Korean Culture and Information Service, CC BY-SA 2.0)"The President abused the power which was given to her by the citizens," the judge said. She also received a fine of US$17 million.

Conservative and older South Koreans had gathered outside the court to support Park. Her electoral base remembers the time when her father, who is often called a dictator, ruled the country as a period of strength.

South Korea has been in turmoil since 2016 when it was revealed how much adviser and close confidant Choi Soon-sil wielded power over Park. The revelations lead to millions taking to the streets.

Following the nation-wide protests last year, a vote by the National Assembly and a unanimous decision by the Constitutional Court lead to Park’s impeachment over helping Choi.

Two weeks after her impeachment on March 10, Park was arrested.

Choi Soon-sil is accused of influencing Park to move money into organizations under her control and getting her daughter into an elite university. Choi was given a 20-year jail sentence along with a $16.6 million fine in February for abuse of power, coercion, fraud and bribery.

Businessmen Shin Dong-bin, chairman of conglomerate Lotte, and Lee Jae-yong, vice chairman of Samsung Group, were also implicated in the scandal and were both charged with bribery.

Choi is the daughter of a cult leader, who – as stated in a leaked 2007 US diplomatic cable – had “complete control over Park’s body and soul during her formative years.”

Park was Korea’s first female president and the first president to be ousted. Her father, Park Chung-hee, orchestrated a military coup in 1961 and ruled Korea as a dictator who brutally crushed dissidents and opposition.

His supporters hailed him as someone who had rebuilt the country after the Korean War.

As he assumed power, 10-year old Park moved into the Blue House and when her mother was killed in a failed assassination attempt on the president, she took the role of the first lady.

That’s also when she fell under the influence of cult leader Choi Tae-min, which raised questions.

Her father was killed five years later and Park withdrew for a while but entered the political scene again in the 1990s after witnessing the effects of Asia’s economic crisis.