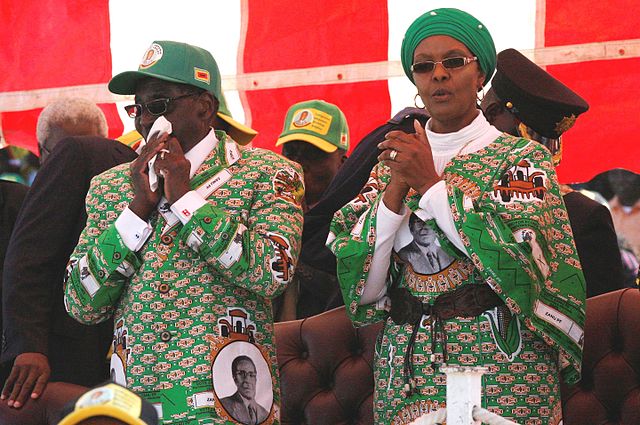 Grace Mugabe with husband and former president Robert Mugabe, circa 2013 (Source: DandjkRoberts CC BY 3.0)The investigation was formally launched after a three-month undercover stint by Australian wildlife photographer Adrian Steirn, who set out to uncover the proliferating black market for ivory and other rare animal materials in the country by posing as an ivory trader.

With hours of footage, documents, and testimonies, Steirn uncovered the poaching and smuggling syndicate in December 2017, whose clients were the inner circle of Zimbabwe’s first lady. Shortly after, 200 kilograms of ivory destined for Malaysia were seized from Harare's Robert Mugabe International Airport.

Among the ivory, authorities also found gold and diamonds, according to the Sydney Morning Herald.

"Ivory was being sourced either from the national park's vault, being thieved or pilfered, or from live elephants being killed by poaching syndicates,” Steirn said.

“The syndicate would then sell to Grace Mugabe's clientele."

According to Steirn, the first lady would then pack and send the ivory through the airport. None of her packages were ever searched or scanned on their way out of the country.

While a controlled ivory trade is permitted in Zimbabwe, unregulated sale and export of any kind is illegal.

Grace Mugabe, nicknamed “Gucci Grace” for her lavish spending habits, was set to be the successor to her husband, Robert Mugabe, whose controversial decades-long rule of the country came to an end in November 2017 when he was ousted by the military. The former president was lauded for his pan-African ideals, but heavily criticized for mismanaging the country into economic ruin, indirectly causing a mass famine, and allowing the proliferation of various illegal mining and poaching rings.