Federal authorities indicted ten suspected members of the Sicilian mafia on Friday with extortion, loansharking, wire and mail fraud, narcotics distribution, and conspiracy to commit murder on behalf of the Cosa Nostra. 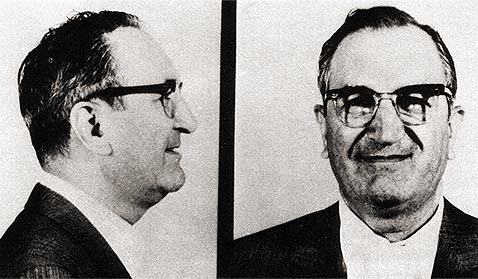 Joseph Bonanno, original leader of the Bonanno crime family (Photo: US-amerikanischen Bundesregierung, CC-PD-Mark)After several raids in the New York city area—including one at the “Xcess Gentlemen’s Club” on Staten Island—nine of the ten accused mobsters were taken into custody. Eight of the men worked for the Bonanno family, while the other two are members of the Genovese and Luchese crime families, respectively.

All of the suspects have been charged with racketeering conspiracy, according to a news release from US Immigration and Customs Enforcement. Each man faces up to 20 years in prison per charge.

Joseph Cammarano Jr., one of the accused, is also known as “Joe C” and is the Acting Boss of the Bonanno Family, according to US federal agents.

Cammarano reportedly took over as leader of the Bonanno family in 2015, when the group was still rebuilding itself after a series of federal round-ups which took place in the early 2000s, according to The New York Daily News.

The 58-year-old Brooklyn native has pleaded “not guilty” to all charges.

Albert Armetta, known as “Al Muscles”, faces an indictment for assaulting a victim on Halloween night in 2015 “for the purpose of gaining entrance” to the Bonanno crime family.

Two other indictments include a gun-running operation and a scheme to defraud FEMA of US$ 80,000 in Superstorm Sandy recovery money, according to CBS New York.

Among the others charged are George “Grumpy” Tropiano, Eugene “Boobsie” Castelle and John “Porky” Zancocchio, captain and “Consigliere” of the Bonanno Family.