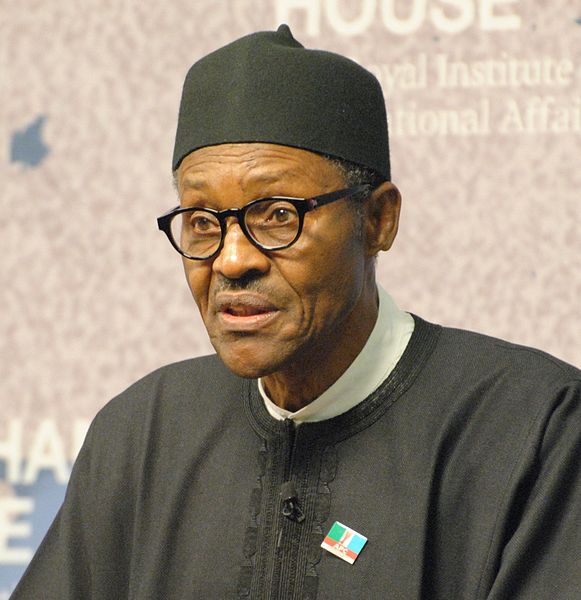 President Muhammadu Buhari (Photo: Chatham House, CC BY 2.0)Babachir Lawal, the Secretary to the Government of the Federation was sacked for allegedly diverting funds intended for internally displaced persons.

Also fired was spy chief Ayodele Oke, director general of the National Intelligence Agency (NIA), who was allegedly connected with a mysterious cache of $43 million in NIA funds recovered from an upscale Lagos apartment.

An anti-corruption panel headed by Vice President Yemi Osinbajo investigated the allegations, and submitted a report of its findings with recommendations to Buhari in August.

Both officials were suspended from their posts prior to their firing. Buhari did not order their immediate arrest and prosecution, saying the anti-corruption panel should conclude its investigations first.

A spokesperson for Buhari explained, “When and where they have reasonable grounds to charge former or serving officers to court under our laws, they do not require the permission of the President to do so,” according to Premium Times.

Boss Mustapha, a lawyer with experience in politics, replaced Lawal as secretary. Ambassador Arab Yadam was appointed as acting director general of the NIA after Oke’s suspension. There was little word on Oke’s official replacement.

The corruption probes into Lawal and Oke are in line with Buhari’s 2015 presidential campaign promise to combat systemic corruption in Nigeria. There have been no major convictions during his time in office thus far.

Despite general public approval of Monday’s sackings, Buhari was criticized for not doing enough to bring the men to trial and continuing to protect other officials previously suspected of corruption. Governor Ayodele Fayose said that Buhari fired Lawal and Oke merely to save face amidst doubts surrounding his promise.

“What Nigerians expected from a president who rode to power on the basis of integrity, is a total cleansing of his government…[not] setting up [a] panel to investigate corruption allegations involving his men and reluctantly sacking a few of them,” Fayose wrote in a statement cited by The Guardian.