An Ecuadorean judge on Monday ordered the pre-trial detention of Vice President Jorge Glas while he is under investigation for graft involving Brazilian construction company Odebrecht, Reuters reported. 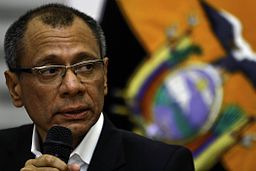 Ecuadoran lawmakers in August decided to allow the corruption probe against Glas to proceed.

He has denied any wrongdoing and claims that the court’s ruling is a politicized campaign against him.

"Don't worry, you don't have to search for me, I'm where I always am," Glas said on Twitter. "I'm not going to escape. Those who are innocent never flee."

Glas is already barred from leaving Ecuador and the pre-trial detention is meant to prevent him from fleeing the country during the ongoing investigation.

In August, Ecuardorian president Lenin Moreno discharged Glas from all his duties as vice president following a dispute, and relegated him to a mainly ceremonial role.

Odebrecht was charged with paying about US$ 788 million in bribes in 12 countries in Central and South America and in Africa to win contracts between 2001 to 2016.

The scandal has led to the arrest of dozens of business leaders and public officials.