The son of former Honduran President Porfirio Lobo was sentenced to 24 years in prison on Tuesday after pleading guilty to drug trafficking charges, the US Department of Justice said. 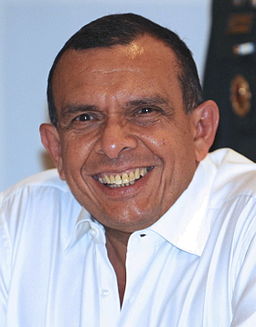 Porfirio Lobo (Photo: Wilson Dias/ABr, CC BY 3.0 BR)Fabio Lobo, 44, admitted to conspiring to import multiple kilograms of cocaine into the US.

Lobo helped in 2014 two Drug Enforcement Administration (DEA) agents who were posing as Mexican drug traffickers transport cocaine to the US via Honduras, according to the indictment.

Prosecutors said that Lobo intended to profit from facilitating drug trafficking through Honduras, which has long served as a transshipment point for US bound cocaine smuggled out of South America, Reuters reported.

“I want to apologize to the government of the United States,” he said tearfully before his sentencing. “I apologize to the people of Honduras, to my mother and especially to my father, who has nothing to do with this.”

Leonel Rivera Maradiaga, the former leader of a Honduran drug trafficking organization who is now cooperating with prosecutors, testified at a hearing in March that he bribed Lobo and his father for favorable treatment, court documents show.

Lobo’s father was elected president of Honduras in 2009 after a military coup ousted then President Manuel Zelaya. He left office in January 2014.

US Attorney Joon H. Kim said that Lobo used his father’s position and his own connections to bring drug traffickers together with corrupt police and government officials, according to Insight Crime.

“Whether you are a street-level dealer, a member of a cartel, or the son of a former foreign president, drug dealing is drug dealing,” Kim said. “It is a serious federal crime for which you will be prosecuted.”

Lobo pleaded guilty in May 2016, about a year after he was arrested in Haiti by the DEA.

He is the latest prominent Honduran to be charged in the US with drug related crimes. Members of the Rosenthal clan including political juggernaut Jaime Rosenthal Oliva, his son Yani Rosenthal, his nephew Yankel Rosenthal, and one of their family lawyers were all accused by US prosecutors of money laundering.

Yani and Yankel both pleaded guilty to the charges this year.